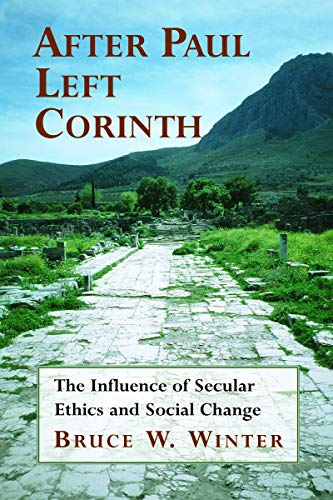 AFTER PAUL LEFT CORINTH: THE INFLUENCE OF SECULAR ETHICS AND SOCIAL CHANGE

Winter’s study seeks to bridge the information gap between classical ancient historians and papyrologists, epigraphists and archaeologists by harvesting evidence from inscriptions and archaeological studies that throws new light on understanding 1 Corinthians. He contends that most of the issues that are addressed in the letter stemmed from the influence of Corinth’s cultural setting, which makes it imperative to understand that setting.

In Part I, Winter deals with passages where he contends the values of secular ethics have influenced the believers’ behaviour. He attributes the divisions addressed in 1 Corinthians 1–4 to the competitive spirit inherent in the educational model of the Sophists. He concludes that the father of the man living with his father’s wife must still be alive, which explains why this affair was so scandalous because Roman jurisprudence generally excused illicit marital unions but clamped down on adulterous incestuous affairs. The lawsuit in 1 Corinthians 6:1–8 arose from the culturally ingrained pursuit of status by defeating adversaries in vexatious litigation. The nexus between the private banquets and ‘after dinners’ in which guests indulged in an unholy trinity of gluttony, drunkenness and sexual debauchery helps to explain the context of 1 Corinthians 6:12–20. The Corinthians justified their hedonistic indulgence with secular elitist ethics that entitled those with social status to live according to the maxim, ‘All things are permitted’. The nettlesome problem of the veils of 1 Corinthians 11:1–16 is explained by the fact that men of status covered their heads when they prayed while wives discarded their veils that served as a sign of their marital status. During the Lord’s Supper, each is partaking of his/her own food with no consideration for those present who have nothing. Paul’s insistence that they ‘receive one another’ entails sharing their food with others and relieving their hunger and embarrassment, not simply waiting for them to arrive. The recent discovery of curse tablets in Corinth throws light on 1 Corinthians 12:3. Christians are acting in a thoroughly Corinthian way by attempting to pull down adversaries by means of curses in Jesus’ name. Commending Stephanas (1 Cor. 16:15–17) serves to subvert normal views of patronage and its ranking system. His example shows that others are not to be treated as stepping stones to increase personal status, to build a power base, or to fashion an impressive entourage.

In Part II, Winter singles out changes that occurred after Paul left Corinth—the creation of the federal imperial cult, the relocation of the Isthmian Games, and the severe grain shortages—as precipitating new problems. He interprets the ‘present distress’ in 1 Corinthians 7:26 as a reference to the hardship caused by famine. Married couples sought abstinence in order to pray because of ‘the present troubles’, and the betrothed wondered if they should consummate their marriages. A petition from Argos relative to the Achaean federal imperial cult illumines the issues raised in 1 Corinthians 8–10 about idol food. He interprets ‘this right of yours’ (1 Cor. 8:9) to be a right possessed by some in Corinth to dine in connection with the entertainment at the Isthmian Games.

Winter is to be commended for unearthing pertinent background information and offering creative and carefully argued interpretations of difficult passages in 1 Corinthians. Many of his insights have appeared previously, and bringing them together in one place serves to strengthen the cumulative effect of his arguments and is sure to reward readers and spark new debates.