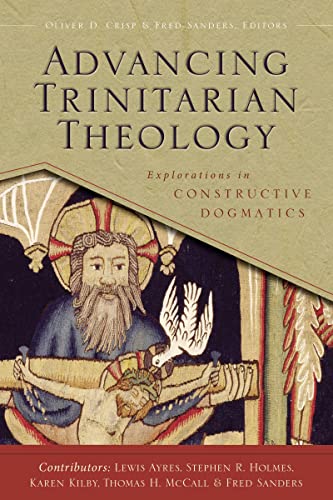 Dogmatic theology in recent years has been marked by a flurry of activity with respect to the doctrine of the Trinity. The so-called “Trinitarian revival,” led first by Barth and Rahner and carried on by Robert Jenson, Colin Gunton, and others, was the center of a great deal of interest and the foundation for a number of constructive proposals about the nature of the church, creation, personhood, politics, and more. Parallel to this movement, there has also been the analytic theology movement (see, for example, the work of Alvin Plantinga and Michael Rea) which uses the tools of analytic philosophy as a foundation in order to bring greater clarity and additional resources to the issues of dogmatic theology. But with the turn of the twenty-first century came a number of theologians, particularly those familiar with the figures essential to the fourth- and fifty-century formulation of the doctrine of the Trinity, who scrutinized both the Trinitarian revival and the analytic methodology with greater and greater concern. Among those involved in this reexamination of the historical roots of the doctrine of the Trinity, the works of Lewis Ayres (Nicaea and its Legacy: The Doctrine of God in Scripture, History and Modernity [Oxford: OUP, 2006]) and Stephen R. Holmes (The Quest for the Trinity: The Doctrine of God in Scripture, History and Modernity [Downers Grove, IL: IVP Academic, 2012]) are representative in their depiction of the early trinitarian tradition and in the contrast they draw between the Church Fathers and the great majority of modern trinitarian thought.

The relatively sharp turn from “revival” to “counter-revival” for one reason or another has not resulted in a charitable dialogue between the various players. Contemporary theologians have been dismissive of the recent re-evaluation of various Patristic figures and the essential elements of this tradition. Analytic theologians have derided the presuppositions that guided earlier thinkers and the accompanying ‘appeal to mystery’ and analogical modes of thinking. And historians have been for the most part concerned with identifying the earlier tradition and its most important elements while distinguishing it from various modern proposals. A more generous, and also more constructive, dialogue has been needed. The recent publication of Advancing Trinitarian Theology, which collects a number of the presentations of the 2nd annual Los Angeles Theology Conference, represents a significant step forward in this direction as it brings together a number of important theologians working from traditional, analytic, and more contemporary perspectives.

Recent scholarship on the doctrine of the Trinity has clustered around a number of distinct but interrelated doctrines, and this volume contains at least one essay related to each of the important conversations. Following Fred Sanders’s introductory essay, which provides orientation for the rest of the volume, Tom McCall’s essay examines the doctrine of divine simplicity from the perspective of analytic theology. In contrast to a number of analytic theologians, McCall has an appreciation of the doctrine born of his respect for the tradition of the church’s teaching: “I find implausible the notion that virtually the entire church was so wrong—and, if the critics are right, so obviously wrong, and so obviously and devastatingly wrong—about something so central” (p. 43). He then advances an argument for a modified form of divine simplicity. Lewis Ayres’s chapter on the logic of divine simplicity within the early church offers a fine contrast to McCall’s contribution. Both commend divine simplicity, but Ayres presents a significantly different understanding of how the doctrine functions, a point he makes with direct reference to McCall (p. 104). Ayres also suggests, quite significantly in this reader’s estimation, that there are elements of the patristic tradition which resonate with the concerns of “social trinitarianism” (p. 103n9).

Steve Holmes’s essay on “Trinitarian Action and Inseparable Operations” is an excellent summary of a doctrine which was essential to the reasoning of the first formulators of the doctrine of the Trinity but has been understood by contemporary theologians as opaque at best and misleading at worst. In line with his recent work, Holmes presents the doctrine of inseparable operations as one of a handful of doctrines which stands “in need in our context of retrieval and re-presentation to be rendered comprehensible and plausible in our culture” (p. 61) and the argument which follows fills this need in a clear and concise fashion. Darren Sumner’s chapter on “Obedience and Subordination in Karl Barth’s Trinitarian Theology” touches on a particularly controversial modern conversation: the relation between the Father-Son relation with respect to the immanent Trinity on the one hand and in the history of the Son which takes place in the economy on the other. Sumner gives an excellent window into the kind of insights which inform Barth’s work at this crucial point in his thought, and the essay provides a window into the kinds of dogmatic decisions Barth made which distinguish him from the tradition which comes before him, and why he made those decisions. Sumner also applies this argument to the current discussion of the nature of the Son’s subordination, an increasingly concerning conversation among evangelical scholars of the Trinity.

Special mention should be made of Karen Kilby’s essay, “The Trinity and Politics: An Apophatic Approach.” This contribution is to be commended first for the constructive contribution it provides from a more apophatic perspective, though Kilby acknowledges that her suggestions are relatively modest. But the real value of the essay can be seen in the intriguing and incisive analysis Kilby provides of the argument advanced by Miroslav Volf in his landmark essay, “The Trinity is Our Social Program.” The close reading of this essay Kilby provides is noteworthy not only for its charity but also in her attention to why Volf’s argument has been so influential:

Kathryn Tanner suggests that the trinitarian concepts just happen to be well adapted to the kinds of political questions that currently preoccupy us, and this explains why the Trinity is in recent years such a popular site of political theology. This is right, I think, but not the whole story. There is also the enticement of having such an elusive, even paradoxical concept to work with; something like perichoresis, a notion that we don’t really understand, has, precisely because it is paradoxical, elusive, and not really understood, a distinct flexibility. (p. 83)

Not all the essays are as strong as those already mentioned. In particular, R. Kendall Soulen’s application of the book-length argument made in his The Divine Name(s) and the Holy Trinity (Louisville: Westminster John Knox, 2011) to the current debate about Barth’s understanding of the Trinity and election seemed a bit too ambitious to be captured in the space he was given. But that does nothing to subtract from the overall value of this fine collection of essays. Advancing Trinitarian Theology is to be commended as an excellent constructive contribution to the current discussion surrounding the doctrine of the Trinity and represents a commendable effort to move the conversation forward.