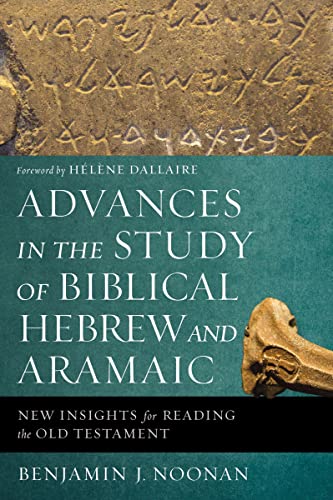 Advances in the Study of Biblical Hebrew and Aramaic: New Insights for Reading the Old Testament

Benjamin J. Noonan’s new book attempts to distill the groundbreaking developments and unanswered questions in research on Biblical Hebrew and Aramaic that have emerged since the turn of the twentieth century. Along the way, he tries to elucidate essential technical jargon and theories, especially from the field of linguistics, so that readers can further their acquisition of Biblical Hebrew and Aramaic, understand the state of research, and enhance their faithfulness in exegesis and ministry. Noonan’s audience includes “students, pastors, professors, and scholars” (pp. 25–29; cf. pp. 270–80). Despite limited accessibility for part of his audience, Noonan has provided a comprehensive and largely accurate resource.

Chapter 3 shows how biblical scholars have conducted lexicology and applied those insights in Old Testament (OT) lexicography. The discussion of the theories behind OT dictionaries and lexicons is invaluable, although Noonan here—unlike elsewhere—limits his discussion almost exclusively to English resources (cf. p. 79 n. 63). Noonan thereafter (ch. 4) sketches notions like valency, transitivity, and Aktionsart and describes how scholars have tried to account for the derived stems of Biblical Hebrew and Aramaic verbs using such concepts. In Chapter 5, Noonan defines tense, aspect, and mood and delineates scholars’ rationale for claiming which component of tense, aspect, and mood, if any, is most prominent in Biblical Hebrew and Aramaic. Noonan next discusses discourse analysis (ch. 6)—which includes but surpasses the propositional analysis of logical relationships that many exegetes exclusively associate with “discourse analysis” (cf. pp. 149–50, 168)—and its application to the OT. In chapter 7, Noonan explains markedness and typology, especially as they relate to word order, and outlines the arguments that scholars have lodged against the traditional notions of Biblical Hebrew and Aramaic word order. Chapter 8 propounds sociolinguistics and provides examples of how sociolinguistic insights can help account for phenomena that traditional perspectives have not adequately addressed. Noonan in Chapter 9 explicates how linguists identify language change, use differing methodology to date texts, and apply these methodologies in Biblical Hebrew and Aramaic. The final chapter (ch. 10) details how Biblical Hebrew and Aramaic pedagogy has evolved in the last few decades, especially through communicative-based approaches to language acquisition.

Leaving aside facets that I wish had been discussed more (e.g., the relevance of ancient translations, which Noonan only mentions dismissively [pp. 77, 134–36]; the significance of alternative masoretic traditions of the OT, such as we learn from the unmentioned Cairo Geniza), Noonan inaccurately describes two areas. First, Noonan’s discussion of dating Biblical Aramaic (pp. 244–59) falls short. He excludes formidable scholars after H. H. Rowley (e.g., John J. Collins, Ian Young) who do not have a traditional bent. Thus, Noonan pronounces, “it is now clear that Biblical Aramaic—including Daniel’s Aramaic—falls within the dialect of Imperial Aramaic” (p. 257). While I too believe that Daniel pre-dates Middle Aramaic, a fairer assessment of scholarship suggests that this is now the minority opinion. In the same section, he situates “the Palestinian Targums” within Middle Aramaic (p. 257)—though they are likely Late Aramaic—and designates 11Q10 as “Targum Job” (pp. 253–54)—when 11Q10 is simply an Aramaic translation, not a targum. Second, Noonan surprisingly omits (cf. pp. 78–87) any reference to the Comprehensive Aramaic Lexicon (CAL), whose editor is Stephen Kaufman, Noonan’s former doctoral supervisor.

Noonan’s discussions occasionally lack clarity, thereby hindering the book’s accessibility. For example, technical words appear that he does not define (e.g., delocutive, desiderative [pp. 105–7], evidential [p. 137], ulpan [pp. 268–73]). More than once he left me questioning whether he understood the concepts to which he referred (e.g., obligatory grammatical arguments [p. 89]; possible syntactical passivity for Biblical Hebrew verbs [p. 93 n. 16]; quasi-ergativity as applied to the Piel [pp. 103–4]). Nevertheless, one can expect several shortcomings in a book that digests such an astounding amount of scholarship.

Pastors may want to skim the book and then avail of the recommended resources (esp. pp. 62–64, 169–80, the “Further Reading” sections, and ch. 10). Aspiring and current doctoral students will find a buffet of potential research questions. Scholars should note Noonan’s repeated recommendations to incorporate modern linguistics (esp. cognitive linguistics)—and glean especially from Noonan’s suggested resources in ch. 1 and the footnotes he cites there—while continuing to use earlier insights from philology, comparative linguistics, and Semitic studies.

Noonan’s scope is ambitious, interdisciplinary, and comprehensive. He interacts with many modern and ancient languages. The back-matter includes an extensive bibliography plus useful author and subject indices. In his appraisals, he displays a command of multiple domains, yet he demonstrates freedom to step back from theories when they do not enhance one’s understanding (e.g., pp. 198–99, 272). The book should certainly whet one’s appetite for what linguistics has to offer research on Biblical Hebrew and Aramaic. Beyond describing advances in the study of OT languages, Noonan advances the study of them in so doing.