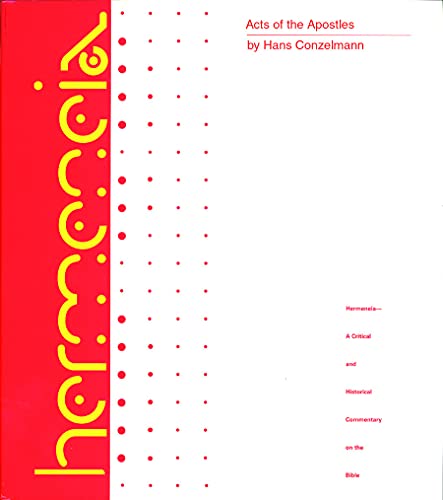 Acts of the Apostles

This commentary by the influential NT professor at Göttingen University was first published in 1963 and revised in 1972. It has been a standard reference work for many years and is now being made available to a much wider audience through translation into English and incorporation into the attractive format of the Hermeneia series.

Although Conzelmann’s monograph on the theology of Luke (German: Die Mitte der Zeit, 1954; E. T.: The Theology of St. Luke, 1960) set the tone for much of the academic debate concerning Luke-Acts in the ‘fifties and ‘sixties, his commentary on Acts has been overshadowed by the much larger and more accessible work of Ernst Haenchen (in the German ‘Meyer’ series 1956, with subsequent revisions; E. T.: 1971). The person who turns to this volume will immediately understand why this is so, since it is much more of a source book of historical, grammatical, textual, philological, and critical materials useful for the study of Acts than a full commentary in the normal sense of the word, though the material is arranged by the editors in a manner to make it much easier to use than the German original. Still, it must be said at the outset that students would be best advised to stick with the more comprehensive commentaries of Haenchen and F. F. Bruce (Greek text: 1951; NICNT: 1952; revised editions of both volumes are in the press at time of writing) for detailed assistance, consulting Conzelmann as one would a lexical or grammatical aid. Those who can read German will wish to consult the more recent commentaries by Gerhard Schneider (2 vols., Herders Theologischer Kommentar zum Neuen Testament, 1980 and 1982) and Rudolf Pesch (2 vols., Evangelisch-Katolischer Kommentar zum Neuen Testament, 1986), which are both more up-to-date and more extensive than Conzelmann or any other commentary available in English at the present time.

As we have come to expect from the Hermeneia series, the volume is magnificently produced. It is both a joy to behold and to hold in one’s hands. The paper is of a very high quality; the mixture of typefaces, both attractive and imminently readable; and the cloth binding, designed to withstand hard use. The front end paper reproduced the Greek text of Acts 5:12–21 from the reverse side of uncial MS 0189, the oldest MS of Acts as well as the oldest parchment MS of the NT (2nd/3rd cent.). The English translation included in the commentary is the rsv adapted to Conzelmann’s interpretation. Sources and texts are quoted in Greek or (occasionally) Latin, but they are normally translated for the aid of the non-specialist. Eleven appendices of longer texts are contained at the end of the commentary, followed by a select bibliography (up-dated slightly by the editors) and extensive indices of biblical, early Jewish, early Christian, Greek and Latin writings, as well as Greek words, key subjects and modern authors.

But when we open the wraps and look inside Conzelmann’s work, we find a number of features that make it unsatisfactory as a primary commentary on Acts. First, it is extremely dated. Much work has been done on Luke-Acts since 1963 (or 1972). More importantly, many of Conzelmann’s most distinctive ideas (e.g. his suggestion that ‘[f]undamental to Acts is a picture of the whole of salvation history divided up into three epochs: the time of Israel, the time of Jesus (as the centre), and the time of the church’, p. xiv) have been discredited by more recent scholarship. Secondly, Conzelmann is extremely limited in his perspective. He shows little awareness of the breadth of the ecumenical enterprise of NT scholarship: his world is the world of German Protestant scholarship, and even here he tends to enter into dialogue with a rather limited group. Only infrequently does he draw from or refer to the work of Roman Catholic researchers or British exegetes (e.g.Bruce gets but one passing reference!). Thirdly, his knowledge of the primary sources of historical research—the inscriptions, the coins, the excavations, the geography, even the Graeco-Roman literature—is obviously second-hand. Conzelmann is much more at home in conversation with his small circle of theological colleagues and in discussing possible (but often implausible) hypotheses concerning historical backgrounds than he is in handling essential historical data. Fourthly, the author tends to be unduly dogmatic. To back up his (frequently disputed) opinion he will cite a reference as if it contained the demonstration of his point, when in fact, the scholar cited actually offers no proof but simply makes the same assertion. It just goes to show that fundamentalists are not the only ones guilty of proof-texting!

In spite of its inadequacies, however, Conzelmann’s commentary will be very useful as a source book for the study of Acts. It will rarely be given the last word, but it certainly will be found useful. It belongs alongside your lexica, grammars and concordances more than among your standard commentaries.