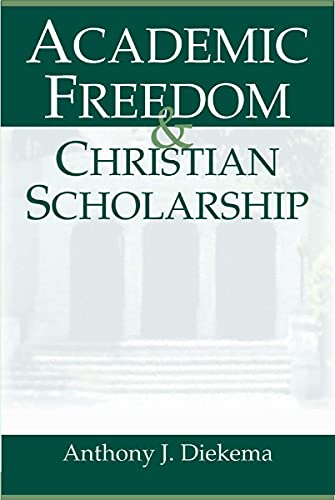 This book is directed principally to Christian colleges and secondarily to other institutions of higher education in the USA. However alongside matters of parochial concern it raises some fascinating issues related to scholarship everywhere and particularly of Interest to Christian scholars.

The great theme of the book is academic freedom. The author was president of Calvin College, Grand Rapids, Michigan from 1976 to 1996. He mounts a robust defence of academic freedom from both political and religious interference from both outside and inside Christian colleges. Powerful churches or denominational bodies can exercise undue influence to keep professors tied down and similarly college administrators may keep too tight a rein on what is taught and published. He gives a definition, ‘Academic freedom is the right and obligation to constantly pursue truth, and to teach and publish it along the way toward the goal of finding ultimate truth’. He then draws on his experience to illustrate a number of threats to academic freedom. These include: ideological imperialism and dogmatism, political correctness and intolerance of religion (the anti-religious bias found in secular universities), censorship of opposing views and what he calls ‘the chilling effect’ and self-censorship fostered by the need to keep in line with the authorities in the interests of job security and promotion. This in the States is the quest for academic tenure. There are also subtle threats from government requirements of institutions. He urges and illustrates vigilance and patient but strong stances against all such threats.

He goes on to point out that recent acceptance of the influence of worldviews on scholarship has not made any difference to the policy statements of institutions or to their adjudication of cases involving academic freedom. These still operate on the basis of the old Enlightenment paradigm of objectivity and pure reason. He therefore calls for guidelines on academic freedom to involve worldviews both of the institution and of individual scholars. He accepts that academic freedom is not to be understood as a ‘do-as-you-like’ freedom. Professors and colleges exist in communities of mutual responsibilities. It is interesting that Diekema bases this claim on the sociologist Durkheim rather than the Bible. For such communities he recommends a ‘Socratic covenant’ and he makes suggestions for the contents of such an agreement. These suggestions include declarations on the part of professors and the institution of their worldviews and the institution’s commitment to defend academic freedom in the sense Diekema understands it. If in their pursuit of the truth the professors change their worldviews and their new worldviews are incompatible with the mission statement of the college, they should resign and the college should do all they can to help them find appropriate alternative posts. Such covenants could replace tenure as guarantees of academic freedom.

It is in his discussion of academic freedom and worldviews that some of his most interesting points are made. He argues that to acknowledge the role of worldviews does not involve acceptance of relativism or postmodernism. He sees postmodernism as a ‘temporary obstacle’, something which threatens to destroy all standards, evaluation, acceptable methods and order and as such he thinks it will self-destruct and leave the academic field. But how does he avoid relativism? He acknowledges the plurality of worldviews in the academy but he urges that the point of scholarship is the pursuit of truth. In this he retains the idea of objectivity.

All scholars should seek the ideal of objectivity in the subject of their expertise; that is, they must allow that subject to be what it intrinsically is. Regardless of worldview and personal inclination toward biases, the scholar may not distort or ignore the commonly known information that must be fundamental for the pursuit of truth in a discipline.

Here and in his reference to ‘objectively observed events’ Diekema’s way of putting matters reads like the Enlightenment view he acknowledges elsewhere has gone. A further debatable point: does he take sufficient account of the sometimes destructive consequences of academic freedom? Admittedly he hedges it round with a commitment to moral order in both academy and society yet he defends Salman Rushdie without any consideration of the offence which that writer gave to thousands of Asian Muslims.

This is a stimulating reflection on a major issue for all involved in higher education and provokes continuing debate about how Christian scholars can help people to think about significant aspects of life and culture today.