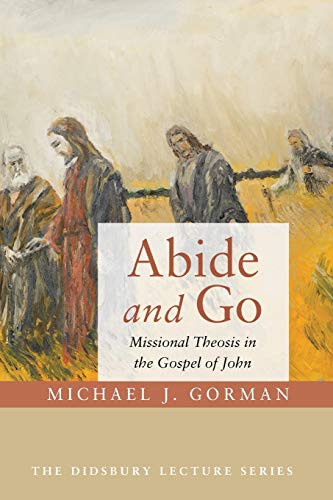 Abide and Go: Missional Theosis in the Gospel of John

The Gospel of John envisions believers in Jesus as those who abide in an intimate unity with the Father and the Son and also as those whose lives are marked by the commission to represent Jesus and bear witness to the Father. Michael Gorman calls this vision of the Christian life “missional theosis.” It is missional because the life of the believer participates in the Father’s commission to the Son (see, e.g., John 20:21). It is theotic because it presupposes “transformative participation in the life of the Triune God” (p. xvii).

Gorman’s argument unfolds across seven chapters. In Chapter 1, “Reading John Missionally and Theotically,” Gorman proposes that John presents the life of faith as one that is both centripetal (drawing inward) and centrifugal (sending outward), and he gives much of the chapter to a defense of the concept of “missional theosis.” Here, Gorman’s robustly theological and ecumenical approach to interpretation is on display. Readers familiar with Gorman’s earlier works will recognize that he finds in John what he has previously described in Paul: a Christologically concrete spirituality.

Chapters 2 through 5 present the exegetical argument of the book. In Chapter 2, Gorman presents an outline of the entire Gospel that demonstrates the unity of John’s narrative as an explication of the Father’s mission. Gorman presents the public ministry of Jesus and the initial descriptions of discipleship as realities that are informed by the life-giving commission of the Father.

In Chapter 3, Gorman treats John 13–16. He reflects on the importance of abiding and doing. To speak of the Son being “in” the Father is to describe a relationship and its resulting behavior. The same is true for the disciples, who are called both to abide in Jesus and to act. Gorman illustrates this with close attention to John 13 and 15, noting the specifically cruciform witness of abiding in Jesus.

Chapter 4 offers an illuminating study of John 17. In the frame of Gorman’s thesis, the structure and themes of Jesus’s prayer hold together nicely: Jesus prays for the conclusion of his own mission, for the mission of his immediate disciples, and for his future disciples. The life to which the disciples are consecrated is one of “other worldly, this worldly holiness” (p. 119)—that is, the disciples are set apart precisely for the purpose of bearing witness to the glory of God through lives patterned after God’s Son, who himself was glorified in self-emptying love.

Chapter 5 considers John 20–21. Gorman demonstrates the many textual links that run between chapters 14–17 and 20–21, including Jesus’s promise to be with the disciples, his pronouncement of peace, and giving of the Holy Spirit. When the crucified-and-risen Jesus declares, “As the Father has sent me, so I send you” (20:22), he calls the disciples into a distinctly cruciform life of mission and participation in him. John 21 illustrates this summons.

The final chapters of Gorman’s book reflect on the implications of his study. Chapter 6 argues convincingly that John’s narrative implies an ethic of nonviolent love for one’s enemies. Chapter 7 summarizes the argument and its implications, locates it among a handful of current studies that take up mission and spirituality in John, and offers five examples of Christian communities that exemplify a commitment to abide in Jesus and to reach out to the world in self-giving love.

A major strength of this book lies in its ability to draw together Johannine studies, Pauline theology, missional theology and hermeneutics, and a broad spectrum of the Christian theological tradition, for the purpose of stating what the Gospel of John is about and what it means to read it as Christian Scripture. This book will be a helpful companion to those planning a sermon series or Bible study on John, and it will be an important conversation partner for seminarians working on the Gospel.

Convincing and helpful as it is, Gorman’s study leaves some work for its readers: First, one of the remarkable features of this study of John is how little it refers to the Old Testament. This is not a charge of Marcionism: for example, Ezekiel 34 is basic to Gorman’s robust understanding of “eternal life” (e.g., pp. 52–54). But it does raise a question: How would further attention to the Old Testament inform the life of missional theosis to which John calls its readers? When seen in light of the Old Testament, for example, two images that John associates with the disciples—as shepherds and fishers—are associated with nurturing a common life among God’s people marked by justice (Ezek 34) and by confrontation of those who exploit God’s people and lead them into idolatry (Jer 16:16–18). Gorman has set us up to ask this question, but it is one that readers will need to pursue as they hold his thesis in their minds.

Second, what are we to make of the fact that the majority of the communities that Gorman describes as examples of missional theosis are not churches and that none of them are held forth for their verbal witness? What is the place of verbal witness in the missional theosis that Gorman sketches? I would suggest this: In his five examples, Gorman describes institutions and movements that enact missional theosis in their ways of life. Verbal proclamation accompanies and complements these embodied forms of witness and transformation (cf. pp. 122–23). In John’s presentation, as Gorman sees it, verbal witness is not the primary expression of mission or participation in Christ. Ecclesial practice is primary (cf. Gorman’s interaction with the work of Andreas Köstenberger, pp. 34–36, 67). What might be the takeaway here? Gorman’s reading of John and his five examples should press readers to consider afresh the connections that unite the struggle for a God-honoring justice, hospitality as a form of self-giving love, and Christian witness, including verbal witness. The modern dilemma—either an embodied, social witness that is just and welcoming or a vigorous verbal witness to eternal life through faith in Jesus—divides what John holds together. Thus, setting justice and hospitality within one’s understanding of mission ought not entail a retreat from verbal witness. But it will entail a greater precision—a riskier precision—for those who would articulate and live out what it means to invite a hostile world into the eternal life that the Father offers to those who believe in the Son.