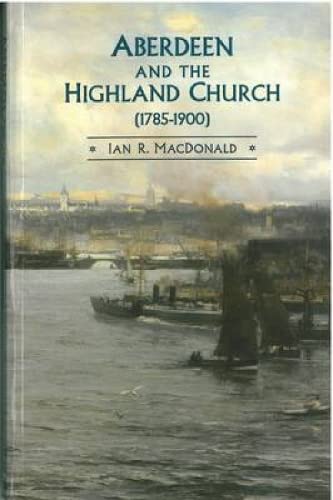 The last two decades have seen a resurgence of interest in the Celtic cultures of British Isles, as is evident in the revival of the study of their various languages such as Welsh and Gaelic. The religious world has also participated in this revival, most obviously through the various groups associated with so-called Celtic spirituality. The historical integrity of this latter trend has been subject to serious scholarly criticism over the last few years, so it is refreshing to find a book which gives us insights into what one might call the other Celtic spirituality—that associated with the Calvinistic church of Scotland which has done more than any other religious group to shape the religious identity of those from the Highlands and Islands.

Dr Ian R. MacDonald is singularly well-placed to write this account of the fortunes of Gaelic-speaking Highland folk as they founded and then maintained a Christian witness in the North East city of Aberdeen. He is the long-standing Session Clerk of the congregation of Bon Accord Free Church of Scotland in the Granite City, a congregation which is, in effect, the descendant of the church about which he writes. Yet this is no sentimental hagiography; nor is it evident that Dr MacDonald’s proximity to, and love for his subject serve to distort his judgment. This is good warts-and-all history which traces the church from its origins in the eastward migration fuelled by late eighteenth century urbanisation, through the traumatic events of the 1843 Disruption down to the union of the Free Church with the United Presbyterians in 1900. It is thus an exemplary local church study that is played out against the background of events of national significance.

The narrative is so packed full of anecdote and fascinating glimpses of church life in the nineteenth century that it is difficult to give a comprehensive overview of the material. Thus, I will confine my main remarks to the very last Chapter. Here, Dr MacDonald gives an analytical summary of the book, arguing that the Gaelic chapel in Aberdeen was central to the social organisation of ex-patriot Gaels in the North East. Being geographically remote from both its Highland cultural centre and the ecclesiastical establishment in Edinburgh, it enjoyed considerable freedom, from the blind-eye turned to its lack of formal recognition to its ability to call its own minister without approval from higher church authorities.

Dr MacDonald also outlines the changing role of Gaelic itself in the congregation. Originally the language was the very reason for the chapel’s existence, but as society changed, as boundaries between Gaelic speakers and non-Gaelic speakers were eroded, as the language itself became less important to the Gaelic community, so English crept into the services. Attempts were inevitably made to stem the tide but this served only to make the language a divisive issue rather than a point around which the congregation could rally. Finally, the chapel became a means of keeping the language itself alive, something which its very existence indicated had once been taken for granted.

So why read a book like this? First, it is well-written and full of interesting stories and painstaking detail. Second, it reminds us that when we talk about ethnic sensitivity and cultural accommodation, this is something which applies as much to the various subcultures of the West as it does to relations between economic and social classes, or between the West and the two-thirds world. Third, many of the issues raised are perennial. I know of Korean churches in Philadelphia where the function of the Korean language in church is now an issue between first generation immigrants and their grandchildren; the same is no doubt true wherever specific linguistic groups form churches within a wider, linguistically alien culture with which they must still interact on a day-to-day basis. Are our churches designed primarily to reach out to a specific ethnic community or to the community in general? For what it is worth, I think either can be a legitimate answer, depending on the circumstances, but being conscious of the question and our church’s answer to it are crucial for effective outreach.

These are the kind of questions provoked by this delightful book. There is also a moving plea for psalmody which readers of Themelios will not be surprised to hear struck a chord with this reviewer. Thus, to those who are interested in local church history, Scottish church history, and questions about church life for those living in culturally alien environments, this book is highly recommended.