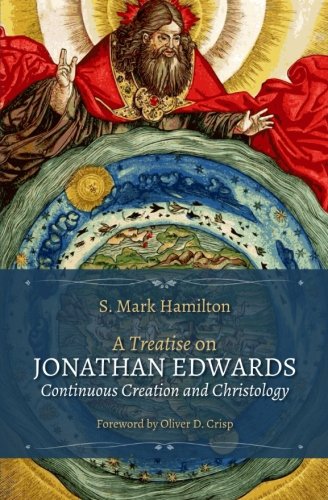 A Treatise on Jonathan Edwards Continuous Creation and Christology

In this slim yet meaty volume, S. Mark Hamilton attempts to resolve a thorny question found in the thickets of Jonathan Edwards’s philosophical theology: how do we reconcile an apparent inconsistency between his doctrine of continuous creation and his Christology? In answering this question Hamilton basically forges a new framework for understanding Edwards’s metaphysics by drawing together Edwards’s ontology with his Christology, an area that has not received much attention from scholars. All this packaged in a volume of just a hundred pages makes Hamilton’s Treatise a gem of a work that any serious student of Edwards must obtain.

Hamilton is a research associate at the Jonathan Edwards Society. He has written numerous illuminating and technical studies on Edwards’s philosophy, Christology, and soteriology. In this volume he tackles a vexing problem found at the intersection of Edwards’s doctrines of creation and Christology. As is generally known, Edwards affirmed the doctrine of continuous creation, or the view that the created order is brought into existence ex nihilo every moment before it drops back into nothingness, only to be re-created by God in the next moment. Hamilton notes that if we apply this doctrine to the humanity of Christ, we run into serious issues of compatibility with historic, Christological orthodoxy. The Christology of the early councils affirmed that the eternal Son assumed a reasonable soul and body and continuously maintains his hypostatic union with the man Jesus (p. 78). How can Edwards affirm the constancy of this union if the man Jesus continuously ceases to be, dropping out of existence moment by moment, only to be recreated at the next point in time? “For it follows on this way of thinking,” Hamilton observes, “that the created mind of Jesus is destroyed every moment, re-created every moment, and hypostatically re-united to the Son every moment” (pp. 55–56). Such a Christology, he suggests, is fraught with insurmountable difficulties.

Hamilton, however, does not believe that Edwards fell into these Christological conundrums because, he argues, Edwards did not apply the doctrine of continuous creation to created minds (pp. 26–27). In other words, Edwards extended the doctrine of continuous creation only to mundane, non-mental objects. By contrast, created minds, including the human mind of Jesus Christ, are real substances that persist through time. Hamilton’s proposal shows that Edwards’s Christology is indeed compatible with Chalcedonian Christology. It also possesses “Cartesian” overtones since it asserts there to be only three kinds of entities in Edwards’s world: God, created minds, and everything else.

To substantiate this thesis, and to demonstrate consistency across Edwards’s thought, Hamilton must make a few adjustments to what is currently understood about Edwardsean metaphysics. It is these adjustments that make up the bulk of the argument and lead readers into the depths of Edwards’s philosophical theology. Edwards does affirm immaterialism, Hamilton notes, but it is a type of immaterialism—“immaterial realism”—which leaves room for the persistence of substantial, created minds that are not re-created moment by moment (pp. 20–27). Edwards does affirm the continuous creation of mundane objects, but past copies of an entity do not drop completely out of existence but are “archived” like past frames of a film strip tucked away on the receiving reel of an old-fashioned movie projector (p. 56). Because of this, Edwards can still be categorized as a four-dimensionalist with regard to his understanding of time (pp. 30–31). Regarding causality, Edwards was an occasionalist “of sorts,” but Hamilton nuances this by revealing how a type of secondary causality continues to operate in Edwards’s understanding of the world (pp. 47–50).

If these terms and distinctions seem complex, remote, or even esoteric, they are because the book aims to address cutting-edge scholarship on the nature of Edwards’s philosophical theology. Would-be readers should possess a high level of philosophical and Christological sophistication to appreciate the argument. For a general audience, this is probably the biggest drawback of the book. Yet, to his credit, Hamilton skillfully explains these philosophical concepts in helpful ways that those less schooled in philosophy can appreciate. As with anything Edwards related, it takes sustained attention and careful analysis to understand the Northampton sage (or what others say about him) if one desires to reap any intellectual or spiritual benefit from the exercise. Hamilton’s Treatise is no different in this regard.

Having made this observation, I highly recommend this work. One of its significant achievements is the way the author employs the tools of current philosophical reflection to make the argument that Edwards’s views are consistent with historic, Christological orthodoxy. The secondary literature on Edwards’s philosophical theology in the last century is rife with progressive interpreters who find Edwards’s relationship to traditional Christian orthodoxy problematic. It is refreshing to find someone conversant with the technicality of contemporary discourse who argues otherwise.