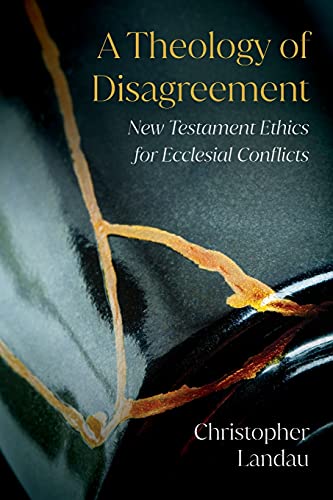 A Theology of Disagreement: New Testament Ethics for Ecclesial Conflicts

As anyone who has been part of Christian communities for an extended period will know, conflict among Christians is disturbingly prevalent, causing both damage to those in the church and missional ineffectiveness. As observed in this book, this is at odds with the desire of the church’s founder, Jesus Christ, who stated “By this everyone will know that you are my disciples, if you love one another” (John 13:35). While there are numerous books on conflict resolution, there are surprisingly few that seek to develop a comprehensive theology for how Christians should approach disagreements. Christopher Landau (Chaplain at Oxford and former BBC world service religious affairs correspondent) has therefore undertaken an important task in aiming to “establish how New Testament texts might inform a theological ethic of disagreement” (p. viii). In his introduction, Landau explains that he has deliberately addressed disagreements rather than conflicts, noting that while disagreements often descend into conflicts, change at this earlier stage “might reduce the scale and frequency of damaging disputes and conflicts” (p. xvi). Landau also states his intent to engage with Richard Hays’s approach to drawing ethical principles from Scripture in The Moral Vision of the New Testament (New York: HarperCollins, 1996). Landau splits the remainder of his book into three parts.

In part 1 (“Disagreement in the New Testament”), Landau systematically works through many passages relevant to disagreement among Christians in the Synoptic Gospels (ch. 1), John’s Gospel (ch. 2), Acts (ch. 3), the Pauline epistles (ch. 4) and other New Testament texts (ch. 5). He considers passages that give direct instructions on how to approach disagreements, but also deals with other related issues, observing, for example, the centrality of Christian unity and love in John’s Gospel (p. 25), and the importance of godly speech (pp. 63–64, 86–91). He also examines narrative examples of disagreements but is attentive to context to avoid misinterpretation. Part 1 is rich and nuanced with many helpful observations.

In part 2 (“Disagreeing Christianly: Constructing a New Testament Ethic of Disagreement”), Landau aims to develop an overarching theology of how Christians should approach disagreements, flowing from his New Testament observations (p. 105). In chapter 6, he begins by examining the methodology of Hays (and others) for developing ethical principles from the New Testament. (I note in passing that while reflection upon the most faithful means of synthesizing and applying Scripture is certainly important in developing biblical ethics, such an extended discussion seems somewhat tangential to the topic of Christian disagreements.) Landau then helpfully justifies his own approach of using Jesus’s “double love command” in Matthew 22:36–40 as an interpretive framework (pp. 117–20).

In chapter 7, Landau returns to the New Testament texts. He notes, in opposition to Hays, the importance of examining apparent contradictions rather than ignoring the more marginal texts (p. 125). He then discusses four instances of apparent contradiction in the New Testament witness of how to approach disagreements and interprets them using Jesus’s double love command. These include: how Jesus’s varied responses to those challenging him can be unified in his underlying aim to reveal the nature of his kingdom (pp. 126–27); how instructions to either face disagreement or avoid it may be appropriate depending on what is most loving (pp. 127–29); how the church may sometimes seek to mediate reconciliation or exclude individuals, again based on what is required in love (p. 129); and how different styles of speaking to opponents, such as listening or rebuking, can also be applied in light of what is most loving in each situation (pp. 130–31). After a further reflection on Hays’s hermeneutic, Landau summarizes the core of his proposed theology of disagreement with the following four New Testament principles:

Let your speech always be gracious, seasoned with salt, so that you may know how you ought to answer everyone. (Col 4:6)

This list is particularly beneficial in aiding Christians to examine the way they seek to navigate disagreements. At the same time, given the wealth of observations Landau makes in his first section, he could have drawn out some further principles—for example, including the importance of involving others in the church when disagreements are unable to be resolved.

In part 3 (“Ecclesiological Implications of a Theology of Disagreement”), Landau seeks to discuss some ways his “emerging theology of disagreement” could be applied to the church (p. 139). In chapter 8, he argues that the way the church disagrees publicly can undermine the church’s witness (p. 141). This is true in principle; however, the areas Landau chooses to examine are controversial. He considers both the debate over how the Anglican Church should respond to homosexuality (p. 142) and the disagreements between Roman Catholic and Protestant Christians (p. 153) to be examples of Christians failing to be united. Landau does acknowledge that there might necessarily be division in the church where there is “teaching that marks a departure from orthodox Christianity” (p. 147). However, he doesn’t clearly define orthodox Christianity or explain his position in these situations, and although he states that adjudicating on these issues is not the goal of his work (p. 145), this allows space for understanding him to mean that compromise is expected of Christians in areas where there should not be compromise.

In chapter 9, Landau highlights the importance of seeking the cultivation of the fruit of the Spirit in our lives (p. 163) to facilitate loving disagreements, and rightly suggests that, when facing disagreement, “if both parties take seriously the mutual presence of the Spirit, that theological reality must surely have a bearing on the ethical approach to disagreement that follows” (p. 169).

Finally, in chapter 10, Landau helpfully examines the potential for liturgy to reinforce ethical principles. He acknowledges that liturgy may produce “mere imitation” in some (p. 178) but suggests that if individuals “come before God in worship, open to the possibility of divine inspiration” (p. 178), liturgy and other forms of worship can produce transformation. He then gives the example of exchange of “the Peace” in the Anglican Eucharist service and notes its potential to express peace towards others flowing from the peace individuals have with God (pp. 183–84).

Overall, Landau’s work is important and timely and will assist both Christians and churches in developing a theological basis for how to approach disagreements. His thorough and nuanced engagement with Scripture is a particular highlight. Although some sections of the book require discernment (if not disagreement!), A Theology of Disagreement is a challenging and thought provoking read, and given the endemic nature of Christian disagreement this book is likely to be helpful for all Christians, whether in vocational ministry or not.