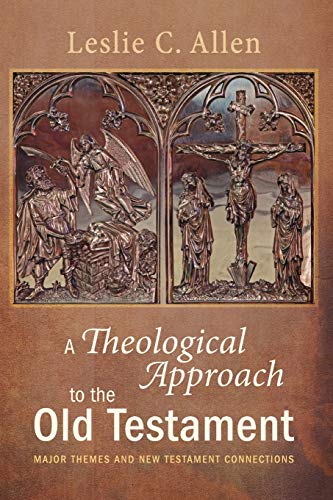 A Theological Approach to the Old Testament: Major Themes and New Testament Connections

Leslie Allen is Senior Professor of Old Testament at Fuller Theological Seminary in Pasadena, California. He has published commentaries on Psalms, Ezekiel, Jeremiah, Lamentations, Ezra, Nehemiah, Esther, Chronicles, and a number of Minor Prophets. Since the present work of biblical theology started as a Doctor of Ministry lecture series presented at Fuller in 2012, it is primarily intended for pastors as an overview of Old Testament theology. He aims to help readers make inter-canonical connections for important OT themes. Each chapter works through the three divisions of the Tanak and seeks to understand the OT like the authors of the NT would have understood it (p. 7).

He organizes the book thematically into nine chapters: (1) an introduction, (2–7) six themes, (8) a theological discussion connecting these themes, and (9) a hermeneutical discussion on bridging from the OT to the NT. Allen’s presentation begins with two major themes, creation and covenant. The first major theme (i.e., creation) corresponds to the subtheme of wisdom. The second major theme (i.e., covenant) has three subthemes: Israel’s religion, the Davidic covenant, and internationalism (i.e., God’s relationship to the nations). This theme-subtheme style of presentation is similar to other recent works, such as R. W. L. Moberly’s Old Testament Theology: Reading the Hebrew Bible as Christian Scripture (Grand Rapids: Baker, 2013) and Robin Routledge’s Old Testament Theology: A Thematic Approach (Downers Grove, IL: IVP Academic, 2013). Allen argues that tracing themes across the canon does the most justice to the whole of the OT and allows all genres of text to contribute to the discussion (p. 6). Nevertheless, his thematic approach tends to lack coherence, for though Allen provides a short chapter seeking to unite the major themes, each chapter reads like an independent, topical essay. By way of contrast, Peter Gentry and Stephen Wellum offer a more cohesive structure in tracing the redemptive-historical trajectory of the entire Bible (Kingdom Through Covenant: A Biblical-Theological Understanding of the Covenants [Wheaton, IL: Crossway, 2012]). Nevertheless, Allen does provide an accessible overview of the main themes of the OT.

The theological perspective undergirding this presentation stands in the tradition of the canonical approach to biblical theology that is most associated with Brevard Childs. Allen writes in the preface, “The final form of OT literature is the basis of discussion, with a postcritical perspective that accepts moderate historical criticism” (p. ix). Thus, his canonical approach to biblical theology does not hesitate to postulate how the development and redaction of the text may have influenced its theological message. Allen also takes this approach in his OTL commentary on Jeremiah (Louisville: Westminster John Knox, 2008), in which he examines the final form of Jeremiah in a manner agreeable to those who use it in religious worship. At the same time, the proposed earlier stages of the text remain important for Allen since the final form is “no less than the sum of its successive parts” (Jeremiah, 2). Even as the book of Jeremiah has a rather unique textual history among OT books, Allen makes the questionable decision of taking the same view of the rest of the OT canon in A Theological Approach.

Allen’s concluding essay on NT connections should also be approached with caution. He outlines a number of ways in which the NT relates to the OT literature: promise-fulfillment, typology, analogy, and pesher. The first three interpretive schemes are commonly advocated by evangelicals and have overlapping characteristics. But Allen’s fourth proposal is more troublesome. The Aramaic term pesher simply means “interpretation” (e.g., Dan 2:4; 5:17), but the way in which scholars apply this term to works of the Second Temple period is far from simple. Allen thus describes his use of the term: “OT texts are given a directly predictive role, though from an exegetical perspective the texts are talking about something else” (p. 161, italics added). By way of example, Allen’s pesher reading of Matt 11:10 understands Jesus investing Mal 3:1 with “a predictive role” concerning John the Baptist, as if the text did not originally have such a role (pp. 161–62). A more conservative reading of such texts sees this text in terms of direct promise-fulfillment or a form of typology (Craig Blomberg, “Matthew,” Commentary on the New Testament Use of the Old Testament, ed. G. K. Beale and D. A. Carson [Grand Rapids, Baker Academic, 2007], 40). Either of these approaches regards Malachi as setting forth a prophecy or pattern which Jesus asserts is fulfilled in John the Baptist. But Allen is quite forthright in stating, “The NT writers, with their retrospective vision, were able to find much more in OT texts than independent, exegetical study of those texts can discover. . . . [Pesher] involved the direct reinterpretation of OT Scripture in the light of contemporary concerns and with recourse to congenial textual variants and interpretations” (p. 173, italics added). All commentators certainly agree that Jesus and the NT authors used the OT text in a variety of ways. Contra Allen, however, the inspired NT interpretation of OT texts does not co-opt these texts to fit their contemporary setting (2 Pet 1:20–21).

A Theological Approach to the Old Testament attempts a monumental task for such a short book, namely, presenting major OT themes and their connections to the NT. It accomplishes its first and more modest goal of outlining major OT themes. But as for its second goal of tracing connections to the NT, the book provides only a basic roadmap and some abbreviated examples. Readers will find more help in this regard in a book like G. K. Beale’s Handbook on the New Testament Use of the Old Testament: Exegesis and Interpretation (Grand Rapids: Baker Academic, 2012).