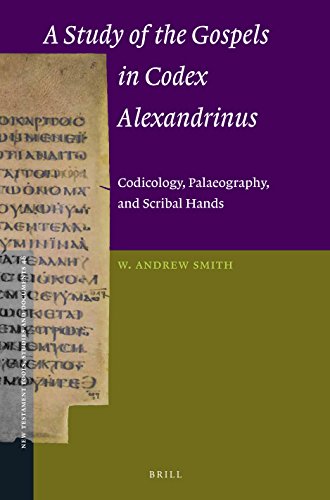 A Study of the Gospels in Codex Alexandrinus: Codicology, Palaeography, and Scribal Habits

The fascinating story behind our modern Bibles is, in many ways, the story of its manuscripts, each one with its own part to play. Although often overlooked, Codex Alexandrinus (A/02) sits in the company of the great Greek Bibles which includes both Codex Sinaiticus (א/01) and Codex Vaticanus (B/03). Here (albeit mostly in the Gospels) it takes center stage in the published form of W. Andrew Smith’s dissertation completed under Larry W. Hurtado at the University of Edinburgh.

Set in relation to past studies of individual manuscripts like Sinaiticus or Bezae (D/05), Smith aims to introduce quantitative data into the study of “physical, paratextual, and textual features of the Gospels in Alexandrinus” (pp. 1–2). The sheer number of tables, lists, and figures shows just how seriously Smith has taken this new approach. Following the introduction, the study unfolds in four main chapters and a brief conclusion. These are supplemented with five appendices, a bibliography, and three short indices (name and subject, manuscript, and biblical).

The first chapter traces the history of the codex before and after it was given to King Charles I of England in 1627. All the marginal notes are surveyed with special attention given to its uncommon ascription to a woman, Thecla of Egypt who is said to have completed the manuscript shortly after the Council of Nicea. Ultimately Smith concludes that this intriguing attribution is “unverifiable (but unlikely to be true)” (p. 34). Certainly the evidence of later chapters points toward more than one producer of the manuscript.

The second chapter turns to the material makeup of the codex and is the first of three that is heavily data-driven. From careful attention to the foliation and quire numbering, we learn that the current order of books is probably original, that the codex was early on bound in two volumes (though now in four and once in one), that two missing leaves have not been accounted for previously, and that, as others have argued, the missing leaves in John’s Gospel would not have had room for the story of the adulterous woman.

Chapter three deals with palaeography and paratextual features of the Gospels. It is also the longest as it encompasses everything from the style of handwriting, the use of color ink, the decorations at the close of each book, the Eusebian apparatus, and the Old Greek chaptering system which is first attested here in Alexandrinus. In the case of the Eusebian apparatus, Smith finds a number of “cascading errors” where the scribe briefly loses track of the Eusebian canon numbers in the Gospels. This along with a clear and well-illustrated palaeographical discussion provides a good case for three different scribes in the New Testament, one of which worked exclusively on Revelation. Strangely, these arguments are given outside the chapter entitled “scribes” and come, with their conclusions (pp. 179–80), before we are given the history of research on the matter (pp. 182–89). A bit of restructuring here would have helped the argument’s flow.

The fourth and final chapter considers features ranging from unit delimitation to the use of nomina sacra and orthography. The orthographic data is important in overturning the suggestion that it demonstrates an Egyptian provenance. In fact, the Gospels in Alexandrinus are quite typical in their orthography and show no distinctly Egyptian influence. The long section on delimitation affirms that the Eusebian sections tend to follow the paragraphing, a conclusion that seems unsurprising given the mechanics of codex production (cf. p. 248n1).

A short conclusion reflects on the preceding chapters and offers brief comments on the potential for further work. Over 100 pages of appendices include lists of exhaustive data for the sections on orthography, unit delimitation, and Eusebian apparatus and offer details on the statistical calculations for chapter two. The largest appendix proves the most useful as it links Scripture references, quire numbers, and all three sets of foliation for the entire codex. Anyone who has stumbled their way around Alexandrinus will have Smith to thank for making their way much easier in the future.

As to formatting, the book is impressively typeset and Brill is to be commended for producing such a clear text even with so many tables and figures throughout. The only improvements on this front would have been a more detailed table of contents and a list of tables and figures. Only a handful of typos deserve mention: ἀφιερώθη needs an acute accent in its three uses on pp. 22–23; there is a tiny discrepancy on the average writing width on p. 53 (19.95 cm vs. 19.93 cm); footnote numbers 75, 76, and 77 are given twice on p. 68; and the first page of Appendix B refers the reader to chapter three when chapter four is clearly meant.

Without question the volume’s strength is its statistical analysis, and Smith’s desire to strengthen traditional codicological and palaeographic study with quantitative analysis is commendable. Unfortunately, the strength also becomes a weakness. In some cases the sheer amount of data overruns its value and in others the data themselves are problematic. In the first category, quire numbers are certainly relevant for determining scribal hands, but I had trouble seeing the real value of six pages listing their “associated features” (pp. 76–82). In the second category, the use of measurements to delineate scribal hands in chapter two is strained by the fact that (a) the measurements are done on a facsimile, (b) the manuscript has been trimmed, and (c) the influence of the ruling lines is not accounted for. Regrettably, the British Library never granted Smith access to the physical artifact, a fact noted at relevant points in the work.

The volume succeeds as “a systematic, descriptive catalog of features found in Alexandrinus” especially in the Gospels (p. 252). Future studies of other manuscripts and of Alexandrinus will suffer no lack of data with which to compare their own material.