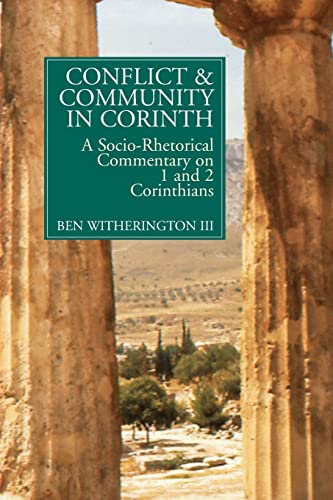 A Socio-Rhetorical Commentary on 1 and 2 Corinthians

Paul has traditional been seen as suspicious of all rhetoric. Precisely because he disowns ‘persuasive words of wisdom’ in Corinth, even recent studies in rhetorical criticism tend to concentrate on the Corinthians’ love of σοφια λογου, while for Paul, it is incompatible with the simple gospel of the cross (see for example Duane Litfin’s ‘St Paul’s Theology of Proclamation’, Cambridge, 1994).

Ben Witherington’s latest offering in an impressive list of contributions to the study of the NT paints a different picture. Witherington’s Paul is no cultural Philistine, avoiding any trace of rhetorical language (as if he could have done anyway!) but a careful and skilful rhetor. To be sure, like Cicero and Isocrates, Paul eschews the guileful ornamentation of Sophistic rhetoric, and in terms of oral performance was not particularly impressive, but all the same as a writer, he uses many of the techniques of standard rhetorical practice as expounded by the likes of Quintilian and Aristotle.

The value of this approach to Paul emerges at its clearest in his treatment to 2 Corinthians, and in particular in the question of the unity of the letter. Witherington argues plausibly that attempts to partition the text are due to a failure to grasp the rhetorical nature of Paul’s discourse, his skilful use of digression, irony, abrupt changes of tone and argumentative method, much of which can be paralleled in the rhetoric of the time. Read in this light, with a keen eye for rhetorical strategy, subtle shifts of style and a sense of humour, Paul’s intentions and persuasive power become much clearer.

One of the comments on the back cover calls this a ‘state-of-the-art’ commentary and so it is. Witherington’s grasp of the literature is extensive (the book includes a wide-ranging bibliography on the letters), using the latest sociological, philosophical, anthropological and archaeological studies to reconstruct the situation into which Paul wrote the letters. The picture he paints is not, it has to be said, dramatically new: like much recent scholarship, he sees the background to the problems of 1 Corinthians in Gentile Graeco-Roman Social structures, religious and political life, rather than in Hellenistic-Jewish influences. The trouble is caused by a group of nouveau riches Gentile converts, attracted by the unwitting Apollos’ Alexandrian rhetoric. At this stage there is no significant opposition to Paul, so the letter is not so much a defence of his authority as an appeal for unity. By the writing of 2 Corinthians, Hellenistic Jews, (not Judaizers) have unsettled the congregation and instilled a deep distrust of Paul.

The commentary rushes through the material at a great pace, sometimes a bit too quickly, assertion occasionally replacing detailed argument. Its conclusions will not convince everyone. Is there really no opposition to Paul in 1 Corinthians? Does not 1:12 imply at least one group within the congregation who think other leaders are preferable to Paul, and 9:3 nascent questioning of Paul’s authority? Witherington’s suggestion of ‘Roman Imperial Eschatology’ as the background to the Corinthian view of the resurrection addressed in chapter 15 is unconvincing and struggles to find evidence in the text to support it. Moreover the link between the two letters is difficult. On this reading the problems in 2 Corinthians seem quite different to those in 1 Corinthians. The context has apparently changed from Gentile wisdom to Jewish, and it is hard to see where the continuity lies.

These do not detract however from an interesting, well-written and up-to-date piece of work. The author regularly introduces judicious comments relating the theology and method of the letters to the modern church. Here is a commentary with its eyes firmly on the ancient context and with the occasional perceptive glance into the modern. Well worth the money.