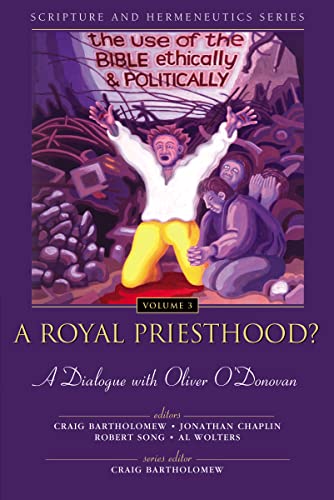 A ROYAL PRIESTHOOD? THE USE OF THE BIBLE ETHICALLY AND POLITICALLY—A DIALOGUE WITH OLIVER O’DONOVAN

This is the third volume in the important ‘Scripture and Hermeneutics series’ of studies edited by Craig Bartholomew and his colleagues. It is based on residential seminars of Christian scholars from various disciplines who are committed to the task of wrestling with the issues related to the interpretation of the Bible in the context of the contemporary world.

In this case, as the sub-title indicates, the entire volume is devoted to a dialogue with Professor Oliver O’Donovan. Participants in the seminar had read O’Donovan’s work in advance, in particular his Resurrection and Moral Order: An Outline for Evangelical Ethics (1994) and Desire of Nations: Rediscovering the Roots of Political Theology (1996), and responded to these texts from their own biblical, theological, historical ethical and missiological perspectives. O’Donovan then responds to the responders, providing readers of this book with access to a live (and lively) debate on which we are allowed to eavesdrop. The result is a very important volume, with a depth and richness of content that can only be hinted at in this review.

Bartholomew provides a very helpful introduction which surveys the problems involved in political and ethical readings of the biblical text, using Goya’s dramatic painting The Third of May to illustrate his argument (the painting is reproduced in the book and forms the inspiration for the new work of art which appears on the dust jacket). The editor describes O’Donovan’s work as like ‘a drink of cold work on a day’ since, while it is informed by historical criticism, it is motivated by the vision of a ‘unified, biblical ethic’.

All contributors to this book share this sense of admiration for O’Donovan’s work, while raising issues that require clarification or further development. The questions range from the manner in which O’Donovan uses the text of the Bible in his ethics, to the theological evaluation of Christendom and the appropriate Christian response to the demise of the Corpus Christianum. It seems invidious to single out specific contributions for mention here, but the reviewer found Christopher Rowland’s treatment of the Apocalypse, with his suggestion that this text require different interpretive skills from its readers than say, narrative or epistle, particularly fascinating, while Colin Greene’s understanding of the history of Christendom probed an area of potential weakness in O’Donovan’s analysis with great skill and insight. Greene argues that the ‘fatal flaw’ in the ‘impressive adventure of Christian mission we call Christendom’ is to be located in a fundamental conflict concerning ‘how the triumph and authority of Christ should be realised among the nations’. This would seem to be an issue of really crucial importance and I am not sure that O’Donovan’s response to this paper was very convincing.

There can be no question that this volume is of major significance and that it demands the attention of biblical scholars, Christian historians and ethicists, and missiologists—especially those concerned with mission to the modern Western world. It is disappointing that the editor’s creative approach in the use of art in his introduction is not taken up by any other contributor (although Rowland comes closest to this in comments noted above), and the exclusively Western approach to this discussion is both surprising and alarming in the era of globalisation and the emergence of world Christianity. There are also obvious problems for readers who (like this reviewer) have not yet studied the texts under discussion, although this volume has catapulted O’Donovan’s books to the top of my summer reading list! These reservations apart, nothing can prevent the conclusion that this is a most important publication, rich in theological content, full of promise in the search for a faithful missionary stance toward modern culture, and a model of genuine dialogue concerning issues over which Christians may have important disagreements.