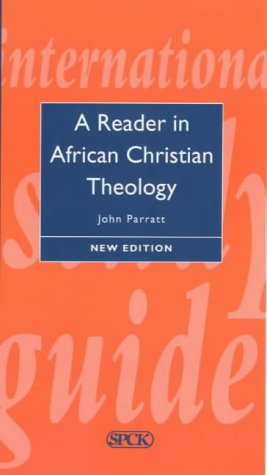 This reader was first published in 1987. All the extracts in the original edition remain in this new one but with the addition of three new extracts which take account of the growth of feminist and evangelical theology and the charismatic movement in Africa. Following a brief introduction by the editor to the context of African theologizing the extracts from the work of African theologians is divided into three parts.

The first part entitled ‘The Theological Method’ contains ‘What is African Theology?’ by Harry Sawyerr, ‘The Sources of African Theology’ by John Pobee, ‘The Task and Method of Theology in Africa’ by T. Tshibangu, ‘Black Theology and African Theology—Soulmates or Antagonists?’ by Desmond Tutu and ‘Doing Theology as African Women’ by Isabel Apawo Phiri.

The second part entitled ‘Aspects of Doctrine’ has papers on ‘The Doctrine of God’ by Charles Nyamiti, ‘Christology’ by Kofi Appiah-Kubi, ‘The Theology of the Cross’ by Kwesi Dickson, ‘Salvation as Wholeness’ by Manas Buthelezi and ‘Authentic African Christianity’ by Tite Tienou.

The third part on ‘The Church and the World’ has extracts on ‘Initiation, Traditional and Christian’ by Marc Ntetem, ‘The Church’s Healing Ministry’ by J. Ade Aina, ‘The Church’s Role in Society’ by Julius Nyrere, ‘An Ethic of Liberation for South Africa’ by Allan Boesak and ‘Charismatics and Community’ by Irene John.

The volume is then completed with a conclusion on ‘Current Issues in African Theology’ by the editor, bibliographies, a useful glossary and an index.

This volume has been designed for use in theological colleges particularly in Africa but also opens a window for those of us outside on what is happening in African theology. It should be of interest to everyone to know how theology is being done in that part of the world where Christianity, in terms of church growth at least, is now at its most vibrant. Sadly, this reader does not present a very encouraging picture. It presents theologians that are still struggling with the fact that Christianity came to them hand in hand with colonialism. When the extracts were being written colonialism was still showing its most ugly aspect in the cruel apartheid system of South Africa. Not surprisingly, therefore, the scene is dominated by the desire to find an African identity for Christianity in the face of cultural and political oppression. This is understandable, but the time must be coming when African theologians realise that Western theologians are also struggling against the oppression of Western culture.

It is also worrying that most of the theologians in this reader seem to be looking to the liberal tradition of Western theology for equipment to meet the challenge of the West while this is the theological tradition that has undoubtedly led to the decline of the church in the West in the last 50 years.

But the selection ends on a very hopeful note with the new section on ‘Charismatics and Community’ by Irene John. This tells of the rise of charismatic churches in Sierra Leone and the impact they are making in creating vibrant Christian community that is breaking down ethnic barriers, introducing moral behaviour into work, business and government and spearheading development through The Evangelical Fellowship of Sierra Leone. Such revival movements may very well give birth to a theology that will be of significance to the world church in the next century.