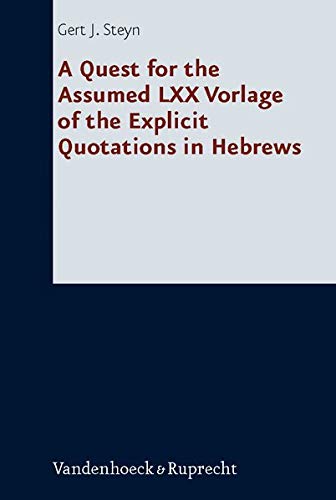 Many studies exist on the use of the OT in Hebrews—that, Steyn argues, is precisely the problem: studies exist on the use of the OT in Hebrews rather than the form of the OT possessed by Hebrews. We need, he suggests, to discern where Hebrews obtained its OT citations before we decide what it does with those citations. Some of the texts that Hebrews combines appear together in other, earlier texts (e.g., Ps 2 and 2 Sam 7 in 4QFlor): does this suggest a liturgical “testimonium-collection” (p. 6)? Some citations by Hebrews do not match any extant OT text: did Hebrews cite these imprecisely from memory, deliberately change his text, or simply possess a version no longer in existence? Is it merely coincidental that Philo of Alexandria also cites every text that Hebrews cites (save one)?

This book is organized by text-pairs; Steyn suggests that the citations (which he limits to cases involving an explicit introductory formula) may be grouped into fourteen pairs, the first seven of which come primarily from the Psalms, while the latter seven usually cite the Torah plus either a psalm or prophet (p. 27). Following the introduction, each chapter deals with one of these fourteen citation-pairs. In each chapter he deals extensively with the manuscript evidence for the OT text as well as its form in Hebrews, identifying in each case the likely OT source of the quotation and engaging the questions noted above.

Steyn closes with twenty-five conclusions, a few of which I mention here. First, Steyn dismisses the notion that the author of Hebrews drew from a preexisting collection of texts (a “Testimony Book” [p. 409]), but does acknowledge that many of its texts have liturgical connections, and furthermore states, “there is no doubt that the author of Hebrews tapped into the existing early Jewish and early Christian quotation traditions” (p. 410, italics original). Second, Steyn notes a significant overlap between Hebrews’ choice of OT texts and that of Romans and 1 Corinthians. Third, Steyn suggests a eucharistic connection via the combination of Exod 24:8 (blood) and Ps 40:7–9 (body) (ch. 10; pp. 272–97). Fourth, he argues that Hebrews made both stylistic and “theological” changes to his received text (p. 412).

This book should be treated as a reference source. Steyn has compiled an impressive collection of data, much of which (especially the text-critical sections of each chapter, which deal with the manuscript tradition on a level unattainable by even the average NT or OT scholar) will simply overwhelm the casual reader with an interest in the OT in Hebrews. The most fruitful approach will be to read the introduction and conclusion and then read particular chapters as one’s own projects render it necessary to do so.

The positives: as already mentioned, this sizeable book (the main body of text is about 400 pages) contains a wealth of data for anyone interested in the OT in Hebrews. Its basic premise, moreover, is spot-on: Hebrews scholarship is weak with respect to the source(s) from which Hebrews drew its OT citations. This book will go a long way toward fixing that problem. It is an excellent reference tool insofar as it provides excellent summaries of varying positions on the issues it discusses, as well as clear arguments on behalf of Steyn’s preference in each case, and a simple organizational principle (the text-pairs) that make it very easy to find the right section of the book.

The negatives: in pursuit of comprehensiveness Steyn sometimes belabors relatively straightforward points. Who, for example, would dispute his claim that Pss 2 and 110 are of particular importance for Hebrews (pp. 410–11)? One also finds some unnecessary repetition within sections, such as the discussions of Christ as “enthroned King” on pp. 36–37 and as κύριος on p. 111. Furthermore, while Steyn’s research is admirable, the footnotes are often excessive. In some sections Steyn hardly has a sentence without a corresponding reference: chapter four, for example, has 232 footnotes in 29 pages. And though I certainly cannot stand in judgment over someone who has successfully composed scholarly literature in a non-native tongue, I would say that the book could have used an additional editing cycle vis-à-vis grammar and style.

Regarding Steyn’s central thesis, I agree that the Vorlage of Hebrews’ OT citations is an important issue that requires more attention than it has received. But I do not agree that the study of the Vorlage of Hebrews’ citations must precede engaging their function. First, many of Steyn’s conclusions match the prevailing views of Hebrews scholars who have said nothing at all about such issues, so he can hardly claim to have broken new ground at every point. Second, Steyn is—and he certainly does not deny this—limited by the same lack of data that plagues every historical study of ancient texts: we simply do not have most of the information that we need to make definitive claims at every point. Thus when the OT text as given in Hebrews differs by a word or two from all our available manuscripts, we can often do no more than make educated guesses about why that is the case. And in such cases we need to be careful about letting that guess determine too closely our subsequent exegetical decisions.