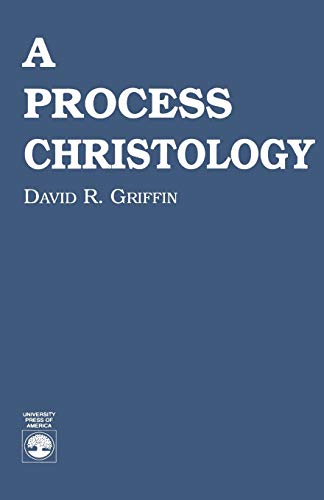 In writing the first full-scale christology1 from a process viewpoint, Griffin attempts to work within three major influences: ‘(1) the new quest for the historical Jesus, (2) the neo-orthodox emphasis on God’s self-revealing activity in history, and (3) the theology based primarily on the process philosophy of Alfred North Whitehead and Charles Hartshorne.’ Griffin is indebted to John Cobb (process theology), James Robinson (Bultmann disciple), both co-workers in Claremont, California, and to Pannenberg (systematic theology). Although dealing with a number of technical theological problems, A process christology can be easily understood by students who have a foundational understanding of theology and philosophy.

Revelation is seen as the key to theology and especially to christology. Griffin believes that Jesus’ main impact is on our conceptual understanding of reality, with volitional and affective dimensions being secondary. Since man wants to operate in congruence with reality, man’s ‘emotions, attitudes, intentions, and actions will, in the long run, be brought into line with his deepest beliefs (cognition) about deity’. In defending the reality and necessity of revelation, Griffin denies the need for an interruption in the scientifically formulated cause-effect understanding of nature and history. The philosophical criteria of consistency, adequacy, and illumination are determinative. One’s acceptance of a theology simply because it is ‘presented’ is irrational and therefore not acceptable.

In Part I Griffin gives a context within which to place the current christological debate. He approaches the issues of revelation and christology in the works of Tillich, H. Richard Niebuhr, Bultmann and Schleiermacher. Griffin indicates inconsistencies which would present rational or conceptual problems in these systems. In his introduction Griffin dismisses Barth on the basis that one who does not aim toward a rational harmony is simply not acceptable. Five questions provide the criteria in each examination: the rationality of theology based on revelation, the content of revelation, God’s relationship to Jesus, the objective and subjective sides of revelation, and the basis for Christian existence.

I have chosen to summarize Griffin’s seventh chapter, ‘A process conceptualization of reality’, since an understanding of process thought will make it easier to grasp Griffin’s christology. First, Whitehead views all reality as atomic. This is not just a spatial concept but also a temporal one. An event or occasion is an entity. Every entity is subject (something for itself) and object (something for others). An entity subjectively takes into account other entities (‘prehension’). After the immediate occasion (subject) passes, the entity becomes an object. Secondly, individuals which last over a period of time actually consist as a series of entities (‘actual occasions’). An entity in the series prehends the past members and carries certain structural characteristics common to all of them. Large bodies, composed of many such ‘enduring objects’ are called ‘corpuscular societies’. No member entity has subjective control over others in such bodies. Examples include rocks, sticks, plants. However, when a corpuscular society does have a dominant subject it is an animal. One enduring object receives information from the other enduring objects and exercises control. The more centralized the control, and the more complex the entity, the higher the animal. A ‘living person’ or ‘soul’ is the enduring object often viewed as a ‘psyche’ or ‘mind’. Thirdly, in that an entity or actual occasion is in the process of becoming, it prehends past entities and unifies them in its experience, thereby having such entities ‘present’ in its subjective becoming. They are present as objects, in the prehending occasion, but not in the subjective immediacy. This rejects substance philosophy in which a substance was defined as not requiring anything but itself for existence. In process thought, an entity is constituted by its prehension of other entities. Such influence is not just accidental but essential. Past entities are an efficient causation but not a complete determination of the new entity. The subject prehends the past, includes its own ‘self-actualization’ and is lured by certain influences in the prehendable future. Just how the past and future are included occurs in the process of the entity becoming concrete. This event of final causation aims toward the ideal self. Fourthly, the concept of ‘aim’ provides the basis for Whitehead’s view of God. As an entity decides how to respond, it (subjective aim) is met by the influence of God or the ‘ideal aim’ (also called the ‘initial aim’). Every occasion begins with this prehension of God. The entity is really free in its response to this ideal or highest aim presented by God. When the entity chooses a lesser aim it reflects the ‘fall’. Since God is seen as an influence on every entity, process thought speaks of ‘panentheism’ (God in everything). Griffin continues to develop a view of God as a living person, as categorically unique, as omniscient, as transcendent, as perfect power, as infinite and as loving. Obviously, some changes from the usual interpretations of these concepts are needed to fit the process mould. Special attention should be given to the Hartshorne notion of God as ‘dipolar’ and trinitarian.

Griffin’s thesis is that Jesus is God’s decisive revelation. Chapter 8 presents Griffin’s view of reality as expressed by Jesus. (1) The historical Jesus is central to christology. A doctrine of Jesus’ person is a pre-requisite for formulating prescriptive statements about Jesus as the Christ (Saviour). (2) The active work of God is both present and futuristic. The nature of the kingdom of God as taught by Jesus gives us considerable insights into his view of reality. Such teaching reveals to us an understanding of God’s ideal aim. (3) Jesus saw the final arrival of the kingdom as a supernatural, catastrophic event under God’s total power. Griffin will attribute such a final state to God’s aim, but will not allow it to be a historical occurrence apart from the free choice of God’s creatures. Here Griffin parts with concepts presented by theologians like Pannenberg, Ladd, and even process-oriented Teilhard de Chardin.

Griffin turns to Cobb’s formulation concerning God’s presence in Jesus. Cobb defines self as that ‘relatively continuous centre within human experience around which the experience attempts more or less successfully to organize itself’. In some persons, the centre may be the rational, while in others it would be the affective aspect. In the Hebrew tradition, a clear sense of self-hood appeared. Within the prophets we see people encountered by God. They often saw themselves battling God’s directives and their own natural inclinations. But in Jesus, God was not just an entity to be prehended, but was actually the organizing centre of Jesus’ psychic life. Neither Cobb nor Griffin see this as constant but refer to it as occurring ‘at least at some decisive moments of his life’. Within this process framework, Griffin argues that Jesus was the supreme expression of God’s character, not differing from other relationships in quantitative terms but in qualitative ways.

As one appropriates Jesus’ vision of reality, the cognitive part of one’s being is brought into the right relationship with God, and is therefore more open to the influence of his ideal aim. An objective occurrence which in some way altered reality concerning evil does not come into Griffin’s framework. The cross is not seen as God’s work in dealing with evil but rather is viewed as the defeat of an effort to influence creation.

A summary of the major problems is needed. (1) One needs seriously to analyse process philosophy to see if it is the most true to reality. (2) In that Griffin agrees that a philosophical base is presuppositional, any theologian needs to consider just how the ‘supernatural’ or the interruption of natural causation is to be viewed. Griffin rejects such a category. (3) Griffin’s view of Jesus which does not incorporate sinlessness as a necessary factor must be encountered by contrary biblical teaching. (4) The reality of evil and sin needs to be seen from a biblical basis including the root cause behind any person’s experience and the objective, cosmic work of God in the cross. (5) The resurrection, instead of being an option, is a central and historical event in God’s relationship with Jesus and with the world. (6) The ‘luring’ work of God is insufficient to being about his kingdom. We must hope in the reality of Jesus’ return and the interruption of natural causation in establishing a new creation.

In appreciation of Griffin several points can be made. (1) The admission that philosophical presuppositions are foundational for any theologian is a worthy point. No system can be objectively and fully proven simply by rational means. (2) Efforts to avoid some Hellenistic influences is commendable. However, the Hartshorne ‘dipolar’ God, although helpful in some ways, is surprisingly similar to Plato’s categories of the abstract and the concrete. (3) Griffin is genuinely seeking to present Jesus as the supreme revelation of God. The existence of this truth, historically and objectively, regardless of anyone’s response, is a positive direction. (4) Finally, Griffin concludes that the appropriate response to Jesus is faith, followed by a changing life.

Finally, the critiques of various theologians presented in Part I and the summary chapters on process theology are extremely well done. Any student seriously dealing with modern philosophy and various approaches to theological questions should invest some time with Griffin.

TSF Secretary for the USA and Canada

by Colin J. Hemer
VIEW ALL VIEW ALL

Yesterday, today and tomorrow: time and history in the Old Testament

The history and literature of the Palestinian Jews from Cyrus to Herod: 550 BC to 4 BC

Jesus and Paul: Paul as interpreter of Jesus from Harnack to Kümmel

Reviewed by Colin Brown
New Testament
VIEW ALL VIEW ALL