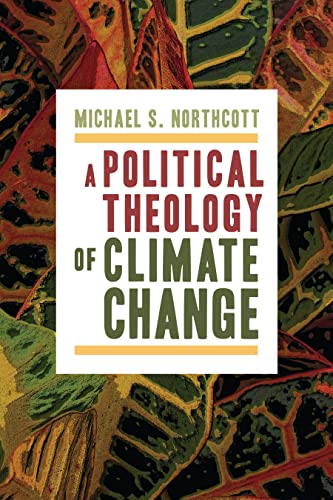 A Political Theology of Climate Change

Michael Northcott is the UK’s leading Christian environmental ethicist, with a number of highly regarded and popular books on the subject going back twenty years. A Political Theology of Climate Change has been seen, at least in some quarters, as his magnum opus although, as he is not yet 60, it is presumably and hopefully not also his ultimate opus. It is substantial, hugely erudite, readably written and immensely sophisticated. It also, to my mind, has one serious flaw, to which I shall return.

Northcott’s strength is his ability to combine comprehensive familiarity with the scientific evidence with theological sophistication and a deep understanding of intellectual history. All of these are on show in the book’s opening chapter outlining “the geopolitics of a slow catastrophe”. The chapter offers a detailed, well-documented and chilling account of the prospect and impact of anthropogenic climate disruption. One Ministry of Defence source Northcott quotes claims that by 2036 nearly two thirds of the world’s population will live in areas of water stress. Other sources give hardly more succour. The chapter, indeed the whole book, teems with predictions of this nature that should give even the most jaded reader a sense of the immense environmental, political and social problems we face within a generation or two. Sceptics will claim that Northcott fails to grant sufficient attention to human capacity to mitigate, modify and adapt, and that therefore the repercussions may not be as apocalyptic as he makes out. Even if this is so, however, and there is probably some merit to the criticism, it doesn’t change the substance of Northcott’s case.

That case is far more profound than simply a diagnosis of impending eco-apocalypse. Because the current process of climate disruption is anthropogenic, Northcott argues, it takes us back to pre-modern “cultural territory” where the idea that humans and their climate (indeed, the whole natural environment) were intimately linked was universally accepted. Once upon a time it was taken for granted that how we lived shaped the natural world, which in turn shaped our own possibilities. Humans understood themselves as part of creation, albeit with unique responsibility for its care and protection.

This worldview was broken up in the early modern period by the Copernican and Cartesian revolutions. Humans were displaced from the rest of creation, estranged and isolated from a natural world that became inanimate, an object of experimentation and exploitation largely independent of human concerns. People might forecast the rain but they didn’t make it. “To be modern,” Northcott writes, “is to deny that the weather is political” (p. 46).

Herein lies our main problem. This “seminal split” between the worlds of nature and culture “tears apart the fabric of metaphysics and morality” so that when faced with the challenge of climate change—in which the weather is thoroughly political—the categories available “in modern moral philosophy” are simply not adequate (p. 199). It is Northcott’s contention that only political theology is up the task because it situates “culture in creation, and politics in the geography of the nations” (p. 8).

The first few chapters of the book replay this conundrum from different angles. Chapter 2 reframes the question by focussing on coal, Chapter 3 takes on oil as a way of analysing our techno-fixation, and Chapter 4 carbon trading (or “indulgences” as he puts it). There is much fascinating detail on show throughout, from health warnings about the use of coal that date back to 13th century London to an informed discussion of the various ideas for geo-engineering our way out of problems, some of which, like injecting huge quantities of sulphates into the atmosphere or covering glaciers with polyethylene-aluminium sheeting in order to increase the earth’s atmospheric/surface reflectivity, verge on insane.

Northcott is not totally against all such measures and some, such as the burial of burned biomass, or “biochar”, as a means of sequestering carbon dioxide, are promising and deserve a hearing. However, such fixes really miss Northcott’s central point. Because the human technological developments that have engineered the coming climate crisis are grounded in deep conceptual errors concerning the human and the natural, the techno-solutions intended to re-engineer our way out of this crisis will fail unless they also attend to those errors.

Northcott’s solution lies in nations as an antidote to the “anomic borderlessness” and “corporate and imperial agencies of industrial capitalism” (pp. 304–5). In this at least he concurs with Roger Scruton in the latter’s Green Philosophy, which argues for environmental activism to rediscover nationhood and local identities. Countering the familiar point that nations are essentially modern, artificial, “social constructs” with no distinct moral character or mandate to serve the common good, Northcott insists that a proper understanding of nationhood recognises its moral, even providential, potential. Only nations can produce an authoritative inventory of greenhouse gases, can nudge citizens through appropriate pricing of energy and taxation, and can restrain large multinational fossil fuel corporations.

Northcott does not imagine nations acting instead of other agents. On the contrary, the book concludes by explaining how the “messianic communitarianism” embodied in the church and also in the “contemporary growth of dissenting citizens” must work to develop practices and networks, which shape national activity (p. 305). Overall, it is a persuasive case, although, as noted, not one without problems.

Northcott makes a convincing case that the modern cognitive severance of nature from culture has caused, or at least enabled, this crisis. Yet plenty of pre-modern societies have managed to commit ecocide without having the benefit of Copernicus, Bacon, Descartes, or Locke giving them the conceptual tools to do so (see for example the works of Jared Diamond). The Greenlandic Norse, Central American Maya and North American Anasazi, not to mention various Polynesian Islands, have managed to deforest, overhunt, overfish, overpopulate, over-consume, soil-erode, or over-extract their way to oblivion. Perhaps the problem is not as complex as Northcott imagines. Perhaps human greed, stupidity, short-termism, and malignity are enough. No doubt, intellectually severing who we are from where and when we are helps. And no doubt therefore, reconnecting those severed ideas—re-embedding human culture within nature, technological and economic solutions with moral lifestyles and ethical frameworks—will help. But the real problem is even deeper.

The impact of evolution on our ideas of race offer an analogy. After Darwin, it became easier for people to dehumanise other ethnic groups, just as after Bacon and Descartes it became easier for them to devastate the natural environment. In both instances there was now a (pseudo-) scientific justification for their activities. But Darwinism no more invented racism than early moderns did ecocide. The human ability, indeed tendency, to devalue and then abuse the other goes about as far into our origins—the core of our ‘original sin’?—as it is possible to go.

Northcott would not, I imagine, demur but if this pessimistic conclusion is right, it buries the problem even deeper within human nature than even this fine book locates it.