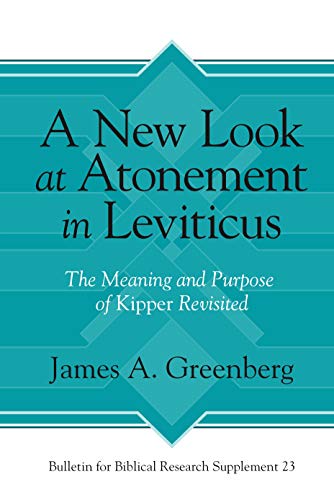 A New Look at Atonement in Leviticus: The Meaning and Purpose of Kipper Revisited

Sacrifice is a crucial biblical theme. Yet, what sacrifice accomplishes and how it does so remain debated, particularly in Old Testament studies. A New Look at Atonement addresses one of the key issues in the current discussion: the meaning of the verb כפר (piel), usually translated “to make atonement.” The volume has two broad goals: (1) to evaluate previously espoused understandings of כפר against the data of the Priestly Torah, and (2) to propose a novel reading of both כפר and sacrifice.

The introduction positions the study within the wider field and outlines starting presuppositions. A survey of how sacrifice has been interpreted helpfully articulates the key positions and the problems faced by each (pp. 1–8). Greenberg rightly notes the overemphasis on both comparative studies and New Testament theology for determining the meaning and function of כפר. Accordingly, his study attempts an inductive analysis of Priestly Torah texts (following Israel Knohl’s delimitations in The Sanctuary of Silence: The Priestly Torah and the Holiness School [Minneapolis: Fortress, 1995]) (p. 9). Comparative data and non-Priestly Torah texts are considered, but only secondarily.

Chapter 1 explores כפר in Exodus 30:11–16 and Leviticus 1–7. Exodus 30:11–16 is important because it uses כפר with the noun כֹּפֶר (“ransom,” NIV). The relationship between these terms is debated but forms a key component of other proposals. Contra construing כֹּפֶר and כפר as (making) ransom, Greenberg contends that כֹּפֶר is not a payment for wrongdoing but instead establishes a protective relationship with YHWH (pp. 15–16). He develops the idea with respect to the חַטָּאת (“sin offering”) and the חַטָּאת (“guilt offering”) in Leviticus 4:1–6:7. Greenberg’s analysis leads to a sustained critique of Jacob Milgrom’s pollution-and-purge view which regards the חַטָּאת as a means of cleansing the sanctuary (pp. 26–32). Instead, Greenberg finds that כפר repairs or creates a relationship with YHWH broken by sin in order to prevent future punishment (pp. 33–34, 45).

The vital question regarding the relationship between the sanctuary and the twin evils of sin and impurity is the focus of chapter 2. Greenberg critiques views which maintain that holiness and impurity can co-exist, a foundational assumption for those who posit sanctuary defilement and purging (pp. 53–63). Instead, he argues that “the sanctuary is holy and not polluted by sin and bodily impurity” (p. 51). An examination of key verbs (חלל [“profane”], טמא [“unclean”], and חטא [“sin”]) concludes that the חַטָּאת does not purge sancta but deals instead with the relational disruption caused by sin and uncleanness (p. 91).

Chapter 3 considers the effects of uncleanness on the sanctuary and persons in Leviticus 11–15. Once more, Milgrom’s position is evaluated at length (pp. 93–103). Greenberg disagrees with the idea that impurity affects the sacred from a distance, by air (as per Milgrom), thus requiring a חַטָּאת offering for purgative reasons (p. 100). Rather, Greenberg posits it is the length of separation from YHWH necessitated by major uncleanness that requires a חַטָּאת. The sacrifice repairs relational disruption between offerer and YHWH (p. 103). This explains why חַטָּאת offerings are prescribed for unintentional sin and major uncleanness: “to be made clean before YHWH produces the same outcomes as forgiveness. Relationship is restored, and the person has free access to the sanctuary and YHWH’s presence” (pp. 108–9).

Priestly mediation is a crucial component of performing כפר, as ordinary people cannot interact directly with YHWH’s presence (p. 113). Hence, in evaluating Leviticus 8–10, Greenberg employs the term homeostasis to describe the interrelationship between YHWH, people, and priests inaugurated by the cult (p. 116). Such homeostasis is established in Leviticus 8–9, maintained by the procedures of Leviticus 1–7 and 12–15 (p. 117), endangered in Leviticus 10 (Nadab and Abihu) (pp. 140–50), and reinstated by Yom Kippur (Lev 16).

Chapter 5 returns to Yom Kippur to consider what כפר achieves in that context. Greenberg holds that Leviticus 16 deals with rebellious sins or deliberately unremedied impurity not covered by the provisions of chapters 1–7, 12–15. Therefore, he argues, “Kipper for the most holy place is not implemented for the benefit of the rebellious people. Rather, it is implemented for the benefit of YHWH, the sanctuary, and the people who have not committed rebellious acts” (p. 160). The so-called “scapegoat” represents rebels who are symbolically dispatched to Azazel (p. 174). In this way, the rite restores homeostasis.

Greenberg concludes that the precise meaning of כפר in the Priestly Torah is dependent on ritual variables. In some texts, כפר achieves “forgiveness” and could be glossed “reconciliation” (e.g., Lev 4:1–6:7). However, in other instances (e.g., Lev 14) כפר signifies “removal” and brings about a clean status. The common denominator is the ability of evils to disrupt relationship and cause separation (p. 192). The remedy is כפר.

A New Look at Atonement is a technical volume. Nevertheless, it should be required reading for students and researchers working in the area. Moreover, while the total sample set of OT sacrificial texts is wider, Greenberg provides a probing and suggestive exploration of what is arguably ground zero for understanding כפר. Throughout, evaluation of Milgrom’s epoch-defining contribution is judicious yet penetrating. Gaps are convincingly exposed, inviting further reflection. In that sense, Leviticus scholarship is well served.

At the same time, there are points where Greenberg’s analysis is less compelling. First, much hangs on the textual data considered admissible. Greenberg follows Knohl’s delimitation of Priestly Torah. However, if that breakdown is challenged, other data become available. Moreover, the underlying hermeneutical issues are not addressed. Regardless of the merits of Knohl’s reconstruction, we do not have an independent Priestly Torah. On what basis then do we privilege (hypothesised) Priestly Torah over non-Priestly Torah in determining theology? Second, Greenberg does not discuss questions of genre and rhetoric. Again, these are crucial issues that impact the derivation of theology from Leviticus. The text (never mind the interpreter) is not dispassionate. Yet the degree to which rhetorical function has shaped (biased?) presentation of sacrificial material in Leviticus is not considered.

These issues notwithstanding, Greenberg’s volume is thought-provoking and deserves a considered reading.