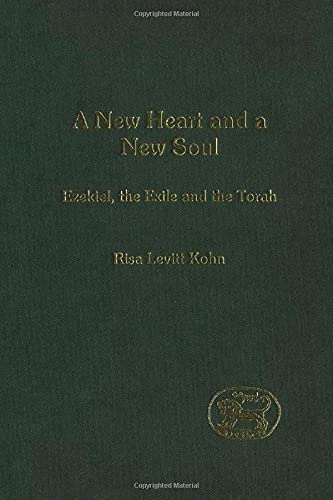 A NEW HEART AND A NEW SOUL, EZEKIEL, THE EXILE AND THE TORAH (JSOTSup 358)

As declared in the introduction, the purpose of this study is ‘to explore and elucidate, to a greater extent than any previous study, the presence of priestly and Deuteronomic language and concepts in the book of Ezekiel’. In pursuing this goal the author considers (1) the relationship between Ezekiel and the Priestly Source, (2) the relationship between Ezekiel, Deuteronomy and the Deuteronomistic History, and (3) Ezekiel’s place in ‘the evolution of Israel’s history, theology and literature’.

After a helpful summary of the history of critical approaches to the subject Kohn pursues her first goal by examining the meanings and contexts of 97 terms, expressions, and idioms that appear in both Ezekiel and P, and providing a short analysis of this usage. She concludes that in fewer than one half of these occurrences Ezekiel and P use the expressions with the same meaning. In the remainder Ezekiel (1) gives a more positive expression than P; (2) evaluates Israel’s history on the basis of laws in P; (3) envisions Israel’s future restoration as a second exodus; (4) appropriates Tabernacle vocabulary for various and new contexts; and (5) employs P’s legal vocabulary in metaphorical ways. The author concludes, ‘Ezekiel knows P, quotes P, but modifies it at will, adding and deleting material as suits his personal agenda and the current circumstances of his audience’ (84–85).

Chapter 4 explores Ezekiel’s relationship to D/Dtr, considering 21 linguistic items. Kohn concludes that despite Ezekiel’s heavy dependence on P, the book has also been influenced by D. In chapter 5 she argues that Ezekiel has taken the two distinct ideologies of P and D and fused them into a coherent whole. In the final chapter, Kohn argues that the hypothesis of the priority of Ezekiel over P must finally be laid to rest. Having both D and P at his disposal (not to mention J and E), Ezekiel functioned as a liminal figure assembling beliefs and traditions concerning the Mosaic age ‘as if he believed that each contained some truth about God and Israel’ (117). Viewing himself as a ‘new Moses’ the prophet tried to create a new theology that incorporated the notions of his sources but more than a simple composite of them, yielding a product that bears striking resemblances to the final Priestly-oriented Torah. In the author’s words, ‘Ezekiel is a precursor to the Redactor(s), who, some years later would boldly combine these contradictory theologies by ingeniously merging four opposing sources’.

Although the title of the volume is somewhat misleading (Kohn gives scarce attention to the new heart and the new spirit) her work complements that of previous scholars (Hurvitz, Rooker), who, while focusing on grammatical and syntactical features, have similarly concluded that P antedates Ezekiel. While we welcome her research and her conclusions, more work needs to be done. First, the author is not exhaustive in her comparison of motifs that link P and Ezekiel. One example she never mentions the bejewelled pectoral of the king of Tyre (28:13), which displays obvious links with the breastpiece of the high priest in Exodus 28:17–20. My own work on this subject supports her contention that it is easy to see how Ezekiel adapts P materials, but extremely difficult to imagine P having based his portrayal of the High Priest on the foreign model described by Ezekiel.

Although Kohn’s collection of the data and her conclusions regarding the priority of P over Ezekiel are laudatory, the additional implications she draws from this are less satisfactory. Her observations regarding Ezekiel’s role in stimulating the production of the Torah are highly speculative. Kohn dismisses the possibility that Ezekiel had a unified Torah in one short paragraph, and concludes, ‘Our analysis strongly suggests that Ezekiel does not know the entire Torah’ (117). But it strikes me that this is precisely what she has not demonstrated. She seems to accept uncritically the conclusions of mainstream scholarship on these matters, and does not consider contrary evidence. The questionable aspects of Kohn’s conclusions notwithstanding, this is a most welcome work.