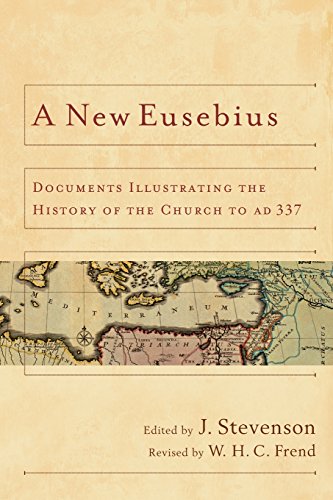 A New Eusebius. Documents Illustrating the History of the Church to AD 337

Thirty years after it was first published, a book which has been an unrivalled resource for English-reading students (and teachers) of the early church for a whole generation has been given a new lease of life. Professor Frend has not only supplemented Stevenson’s collection with a selection of extracts from the Nag Hammadi library of gnostic writings found in 1945, but has also rearranged the order of the documents, grouping them into specific subjects within a chronological framework. A few other additions have been made, and a larger number of omissions of material judged to be of lesser importance or interest. The result is a compilation totalling twelve fewer documents than Stevenson’s first edition. Because only a dozen or so bear the same numbers in both editions, it will be virtually impossible to use the two together in a class of students. (There is no concordance to lessen the difficulty.) This must be judged an unfortunate by-product of what is now undoubtedly a more valuable source-book of early Christianity. The notes and bibliographical information have been brought up to date but not drastically revised.

The accession of the Nag Hammadi material is the most significant difference between the two editions, although whether most students will make much of the brief excerpts from the Gospel of Thomas (placed, it should be noted, under not Gnosticism but ‘Jewish Christianity: Encratism [Severe Asceticism]’) is doubtful. One is surprised not to find anything from the new Cologne-codex account of Mani’s life, and the lack of inscriptions remains perhaps the most obvious gap. But A New Eusebius is assured of a life of continuing usefulness. There is no substitute in historical study for tackling the source themselves, and there is no more convenient access to them for the church to the age of Constantine than this book.