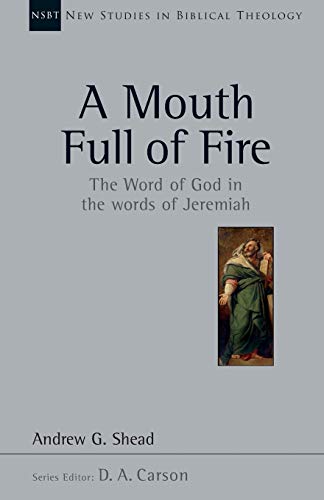 A Mouth Full of Fire: The Word of God in the Words of Jeremiah

Shead begins his character sketch of the Word of God in chapter 2 by arguing that the book of Jeremiah is a narrative about the Word. He makes penetrating observations about the structure of the book, arguing that the book is logically ordered if one pays attention to the disjunctive headings (e.g., in 7:1; 11:1; etc.). The book tells the narrative about the Word in several movements. First, Jeremiah 1–24 gives an intimate view of the Word from the prophet’s perspective. The next three movements (Jeremiah 25–34, 35–44 and 45–52) show its powerful outworking in history.

In chapter 3, Shead discusses the prophet Jeremiah and his relationship to the Word. Jeremiah embodies the Word in an intimate way in that his pain and tears are a presentation of God’s own pain to the people. However, this communication provokes deep tension in the prophet since he not only represents God but also the people as a whole, two parties who are at deep enmity with each other.

Next, Shead discusses in chapter 4 the hearers of Jeremiah’s words and the problem of false prophecy. Interestingly, Shead observes that Jeremiah does not defend the authenticity of his words; he merely reiterates them and lets the words do what work they will. Even so, his audience is fully accountable for their failure to recognize his words for what they are: the very words of God.

Shead then deals in chapter 5 with the apparent failure of Jeremiah’s ministry in that the people did not accept his preaching. However, the Word of God is always efficacious; Jeremiah’s failure “turned out to be no failure, but the exercise of a ministry of destruction” (p. 229). And even this ministry of destruction has an ultimately redemptive purpose, for “[s]uch is the depth of Judah’s depravity that for restoration to be real it must be marked by a fundamental discontinuity with the present order” (p. 99).

The spoken words of Jeremiah eventually become the written words of Scripture. In chapter 6 Shead shows how John Goldingay’s distinction between models of Scripture based on their mode of revelation (Models for Scripture [Grand Rapids: Eerdmans, 1994]) is actually unhelpful: prophecy is not so much a mode of revelation but the “unmediated directness” of the word of God that comes (by whatever mode) to the prophet. Written books can also be prophetic insofar as they convey the Word of God in effective words of God. For Shead, Jer 36 is an especially important illustration, because it identifies the written words of Jeremiah (and Baruch) with the very words of God.

Finally, Shead embarks in chapter 7 on theological reflections concerning the doctrine of Scripture. His main interlocutor is Karl Barth. Against Barth, Shead insists that the written words of Scripture are the words of God (pl.). But the Word of God (sg.) is “never anything less than God himself made present among us” (p. 285), and hence cannot be bound to the written words.

Shead’s book is a model of excellent biblical theology. He combines deep exegetical reflections with attentiveness to the larger theological issues at stake, all expressed in clear prose. The following questions are offered by way of constructive criticism.

Given the close association between Jeremiah and the Word of God, what exactly is the distinction between the prophet as “the words of God embodied” and Jesus as “the Word of God made flesh”? Clearly, Jesus is identified with the Word in a way that surpasses Jeremiah, but Jeremiah is still a powerful foresignification of Jesus as the Word. How precisely does Jesus surpass Jeremiah?

On a related note, Shead overplays the prophet’s union with the Word. At times Shead implies that the prophet’s identity has been completely absorbed into his role as a bearer of the Word. But surely a key theme in Jeremiah’s confessions is his resistance to his prophetic role. In this respect, the intense conflict between Jeremiah and God that concludes ch. 20 deserves greater attention.

Shead’s interpretation of Jeremiah brings a wealth of insight and deserves a wide readership. His book incorporates detailed scholarly work, but presents it in a way that would be approachable by pastors, seminary students, and educated lay people (a knowledge of Hebrew is not required).