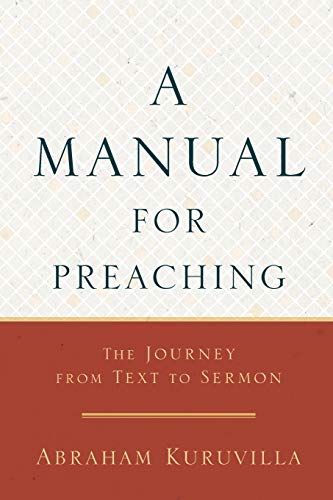 A Manual for Preaching: The Journey from Text to Sermon

With the literature on preaching abounding to such a degree, most would not expect a new book on homiletics to carve out any new ground. However, Abe Kuruvilla, Senior Research Professor of Preaching and Pastoral Ministries at Dallas Seminary, speaks of preaching in such a way as to garner attention and force readers to rethink old paradigms. One may disagree with some aspects of Kuruvilla’s approach, but this work will certainly generate numerous worthwhile discussions and debates in the areas of hermeneutics and homiletics.

While the author has written several commentaries on Genesis, Judges, Mark, and Ephesians, he is best known for his works on preaching. Two of these works—Text to Praxis: Hermeneutics and Homiletics in Dialogue, LNTS 393 (London: T&T Clark, 2009) and Privilege the Text! A Theological Hermeneutic for Preaching (Chicago: Moody, 2013)—are quite similar in nature and lay a foundation for Kuruvilla’s overall hermeneutical/homiletical approach. A Manual for Preaching builds on these aforementioned treatises but is best seen as a sequel to his A Vision for Preaching: Understanding the Heart of Pastoral Ministry (Grand Rapids: Baker Academic, 2015). Kuruvilla states that preaching “by a leader of the church, in a gathering of Christians for worship, is the communication of the thrust of a pericope of Scripture discerned by theological exegesis, and of its application to that specific body of believers, that they may be conformed to the image of Christ, for the glory of God—all in the power of the Spirit” (p. xiv; cf. A Vision for Preaching, p. 1). The present work, the author claims, “is an attempt to describe my own praxis of preaching and share what I have learned over the decades” (p. xvi).

Within this book the author deals with various preliminary discussions, ranging from the purpose of preaching, choosing a text, and short and long-term planning when preaching a series (ch. 1). Chapters 2–3, which are core to Kuruvilla’s purpose, deal with understanding a passage, discerning the theology of that given text, and then moving from the text and its pragmatics to the application to the people. Subsequent chapters then deal with creating maps (ch. 4) and fleshing moves for the sermon (as opposed to writing an outline and making an argument [ch. 5]), illustrating (ch. 6), introducing and concluding (ch. 7), writing a preaching manuscript (ch. 8), and the skills needed when actually delivering the sermon (ch. 9). Throughout these chapters, as the author builds his argument and instructs in sermon making, he also provides examples from Genesis and Ephesians that demonstrate how he would apply each chapter when preaching from those texts. The work concludes with several appendices, including Kuruvilla’s preference for a “Theological Focus” as opposed to the “Big Idea” (a notion made popular by Haddon Robinson’s work Biblical Preaching, 3rd ed. [Grand Rapids: Baker Academic, 2014]), as well as a contention that preaching is primarily demonstration, as opposed to argumentation.

This work will serve as a helpful resource for any preacher, especially those who are new to the task. Kuruvilla’s wisdom displayed in the first chapter gives sage guidance, especially in the areas of short-term and long-term planning. He makes clear that these proposals should not be followed slavishly, as each preacher will develop his own rhythms in preparation, but there is much here to apply to the process, especially so one is not simply starting fresh with a new sermon merely one week before it is delivered. The fact that the author works through the steps contained in his chapters by including examples from Genesis and Ephesians at the end of each chapter is also a great benefit. This allows the reader to see how specific texts get worked through the process Kuruvilla is describing, offering both theory and application. His interaction with authors like James K. A. Smith is also helpful regarding application in preaching, noting that one must work toward habits instilled in a person by virtue of appealing to their minds and affections through the truth of the Word in the power of the Spirit. In other words, preaching is aiming at “ritual practices (of application) becom[ing] radical passions (of Christlikeness) by the revolutionary power of the Spirit” (p. 81). Beyond these specifics, this work is filled with useful anecdotes, practical thoughts on illustrations, introductions, and conclusions, and tips on delivering the sermon effectively.

Alongside the many aspects of homiletical wisdom, it should be noted much of this work—as with any book on preaching—is rooted in hermeneutics. Reflecting on the homiletic vision of his former work, Kuruvilla states that “at the core of that vision was a hermeneutic, a way of reading Scripture, that influenced how I saw preaching. That same hermeneutic also informs my conception of how preaching ought to be undertaken” (p. xiv). The author is certainly consistent, not only in this book, but in all his works on homiletics, focusing on “theological exegesis to discern the doings of the author of the text (i.e., the theology of the pericope) so that we and our listeners, the people of God, can move to valid application” (p. 8). Discerning the theology of the various pericopes allows one to enter the “world in front of the text,” the ideal world that each pericope projects, which we are called to live by, which Christ has lived out perfectly (pp. 28–29). This last phrase is captured in Kuruvilla’s understanding of Scripture as Christiconic; that is, each pericope displays a character quality of Christ and thus shows us what it means to perfectly fulfill the call of that pericope.

Several points should be noted. First, the debate continues regarding whether Scripture should be interpreted from a Christocentric, Christotelic, Christiconic, or some other perspective (see Scott Gibson and Matthew Kim, eds., Homiletics and Hermeneutics: Four Views on Preaching Today [Grand Rapids: Baker Academic, 2018], to which Kuruvilla is a contributor). The Christiconic view, while certainly correct in some respects, seems delimiting, since the NT both quotes and alludes to the OT in ways that shows fulfillment and clearly go beyond what Kuruvilla is suggesting. It seems, then, that we should allow the later OT prophets and NT apostles to teach us how we should read Scripture in view of Messiah’s coming, taking into account promises, prophecies, types, etc.

Second, Kuruvilla’s sole focus on the pericope, while needful to ensure we are genuinely preaching that particular text, abstracts the text from its wider context. One must see a particular pericope within its book-level context. For example, his thoughts on Genesis 22 must be seen in light of what Moses is accomplishing in authoring the whole book. That passage and book must then be understood within its Testament, and then within the canon as a whole. Kuruvilla states, “Biblical and systematic theology do not usually or necessarily come into play in the discerning of the pericopal theology and the derivation of its application for life. For preaching purposes, biblical and systematic theology serve only as cautionary barriers” (p. 47). Indeed, these branches of theology do serve as cautionary barriers, but they serve as more than that. If, for example, biblical theology is the attempt to understand and embrace the interpretive perspective of the biblical authors (see James Hamilton’s What is Biblical Theology? [Wheaton, IL: Crossway, 2013]), then it is imperative that the preacher sees how the biblical authors understood said pericope and see what development comes about within the canon. In summary, the preacher must think theologically about the particular text, but must also always look beyond that one text to the wider book, testament, and canonical context.

Finally, in creating maps and fleshing moves, Kuruvilla seeks to get away from outlines and argumentation in his preaching. This may be a good suggestion, but where one goes will be contingent on the structure and genre of the particular text. Preachers work to show their hearers what the author is saying and doing in that text. This will likely require various structures and approaches to the homiletical outlining process, not merely the ones suggested by Kuruvilla. Also, if the biblical authors are teaching us how to rightly interpret and apply the Scripture to our lives, we would do well to show our hearers what the biblical author is doing, especially with other portions of Scripture. However, Kuruvilla is clear in saying that “as a rule, you will rarely need to bring other portions of Scripture into your sermon.… I am convinced that no two biblical passages can ever have the same pericopal theology, and thus one cannot render substantial support to the other” (p. 126). This, in my estimation, misses how the Bible is written as an interrelated, intertextual book. While I appreciate and applaud his hesitancy when it comes to topical preaching, as well as the need to focus on particular passages, the preacher must show their hearers what the author is saying and doing. For example, it would be doing an injustice to what the biblical author is saying and doing if one preaches Mary’s Magnificat in Luke 1 without referencing 1 Samuel 2, or the book of Revelation in general without drawing attention to Daniel and the OT Prophets. We need to show these things as preachers so our people can better study their Bibles and know their God.

With virtually any book on hermeneutics and homiletics there will be disagreements of various kinds, particularly on issues of methodology. But this should not dim the vigor of those who wish to read this book. Within they will find a treasure trove of preaching wisdom with real practical value. As with any book of this kind they will need to look at the author’s approach and measure it according to their own convictions.