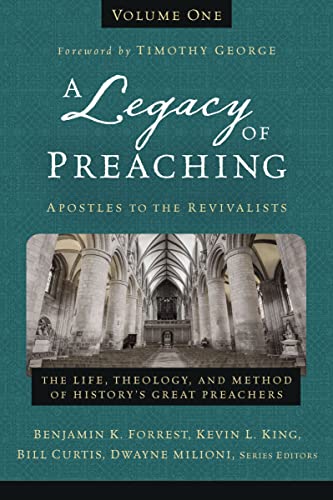 A Legacy of Preaching, Two Volumes

This two-volume set provides a survey of sixty individuals who have influenced Christian preaching from various perspectives, eras, and contexts over its first two millennia. The compilation is not intended to be exhaustive but illustrative, as the editors acknowledge that preacher selection is an imperfect science and that “some readers may be disappointed about who was left out” (1:28). Those included exhibit faithfulness to the proclamation of the Scriptures and maintain a Christocentric focus. Considered experts on their specific historical character, the chapter authors represent a good cross section of evangelicalism, while the editors (Forrest, King, Curtis, and Milioni) are all Southern Baptists. This set divides preaching into seven eras: (1) Early Church and the Patristic Fathers, (2) Medieval Ages, (3) The Reformers, (4) The Puritans, (5) The Revivalists, (6) Nineteenth-Century European and North American Preaching, and (7) Twentieth-Century European and North American Preaching. Each chapter profile presents the historical background, theological approach to preaching (theology of preaching or for preaching), analysis of the preacher’s methodology, and finally the character’s overall contribution to the field of preaching along with a sermon excerpt to provide a glimpse of that individual’s style and impact.

This work does not describe “how biblical preaching is done but demonstrates how it has been done” (1:27). Therefore, one does not need to accept or even desire to employ a particular preacher’s hermeneutic (e.g., Origen’s allegory, Meister Eckhart’s mysticism, or Phillips Brooks’s liberal romanticism), homiletic, or theology (e.g., Charles Finney’s Pelagian leanings or gender role issues raised with the ministries of Aimee McPherson and Catherine Booth), yet the editors believe there is something one can learn from their preaching. While they want readers to recognize that each personality believed they were declaring the Christ of Scripture for the glory of God and his gospel and hope their “big-tent approach to the history of preaching is evident” (2:30), they are candid about the fact that some lessons from preachers “are lessons to follow and some are lessons to leave behind” (2:145).

Despite each preacher’s significance, the authors do not hide the faults and frailties of their subjects. Peter’s fiascos required his own repentance and restoration, which God used to develop his preaching (1:48). Melito’s On Pascha smacked of anti-Semitism (1:71). Origen’s desire was to be thoroughly biblical, still the process and result often failed to live up to the approach. Ephrem used beautiful word pictures yet “at times his exegesis clearly runs amok” (1:103). Basil of Caesarea favored literal interpretation of the biblical text, yet haphazardly, believing that “as long as the derived meaning leads one to Christ and the pursuit of holiness, the interpretation is acceptable” (1:116–17). Even John Calvin constantly corrected mistakes in translation, showing he is “human like the rest of us!” (1:351). Tragedy dogged the colossus Charles Spurgeon (the aftereffects of the Downgrade and physical ailments), the legacies of both Gypsy Smith and Billy Sunday suffered negative consequences from family issues, and Henry Ward Beecher allowed culture to bend his theology.

One can find encouragement and confirmation in the fact that their preaching ministries often resemble ours. Of note is Paul’s gospel-oriented preaching which, needless to say, is an example worthy of imitation (1:39). Significant for the Early Church and the Patristic Fathers were Chrysostom’s expositions based on lectio continua and Augustine’s agape-driven hermeneutic: “The impetus for exegesis and its outcomes should be knowing God and loving neighbor” (1:148). What preacher has not felt like Chrysostom as “he lamented that his audience’s lack of progress in Christian training prohibited him from going as deep as he wished” (1:130)? The Medieval Ages’ Gregory saw the sermon as central to shepherding. Zwingli preached with an “element of expectancy” (1:310), Alexander Maclaren with “contemporary relevance” (2:70), and John Jasper with strong eschatological storytelling. Although both were Southern Baptist stalwarts, John Broadus believed application was “the main thing to be done” (2:223) while B. H. Carroll was “less concerned with the application of the text” (2:262). D. L. Moody earmarked his preaching with simplicity and clarity, Karl Barth “believed that the most effective Christian response to Hitler was preaching” (2:301), and W. A. Criswell’s lifetime of expository preaching and his remarkable sermon “Whether We Live or Die” galvanized both a denomination and American Christianity in regard to biblical orthodoxy.

As noted earlier, these volumes may disappoint some because of the exclusion of numerous notable preachers. To be sure, if one were aiming to write a complete legacy of preaching it would need to begin with the preaching of the Old Testament, starting with Moses, as well as Isaiah, Ezra, John the Baptist, et al. It would have as its central figure, Jesus—the greatest preacher who ever lived. For as Thomas Watson correctly observed, “He alone is the Prince of Preachers. He alone is the best of expositors” (Thomas Watson “The Beatitudes: An Exposition of Matthew 5:1–12,” quoted in Mike Abendroth, Jesus Christ: The Prince of Preachers [Leominster: Day One, 2008], 17).

The goals of this work were to “present a historical, theological, and methodological introduction to the history of preaching” and “aid the reader in the exploration of preaching history, with a biographical and theological examination of its most important preachers” (1:27). The editors have realized these goals, and the format and content of the book will make this a meaningful biographical and homiletical reference for years to come. It will prove particularly valuable for three groups of people: first, for the inquisitive pastor who ponders the strengths and weakness of each character and, in so doing, is “refreshed and encouraged to press in and press on in your calling” (1:29); second, for the student who will find a hero to inspire, an example to follow, looking “to these preachers who sought to follow Christ, love his bride—the church—and preach the Word” (1:29); and, third, for those preparing to teach homiletics, history, or practical theology as they use these volumes as a source to inform and challenge as a textbook or supplement.

Two of the better chapters are “John Huss” (by Mark A. Howell) and “Robert Murry M’Cheyne” (by Jordan Mark Stone), and quite possibly the most poignant line in the entire work is from Howell concerning Huss’s forfeiting of his pulpit: “While it is possible to remove a preacher from their pulpit, it is not possible to take the message out of the preacher” (1:255).

A Legacy of Preaching is not only a necessity for the preacher’s shelf, it is an invitation for every preacher to realize that they too are part of that legacy. So “let us lay aside every hindrance and the sin that so easily ensnares us. Let us run with endurance the race that lies before us, keeping our eyes on Jesus, the source and perfecter of our faith” (Heb 12:1–2). Forrest, King, Curtis, and Milioni convincingly and clearly remind preachers of the race before and the legacy behind them. A Legacy of Preaching will enable preachers to preach better and more effectively “by standing on the shoulders of giants.”