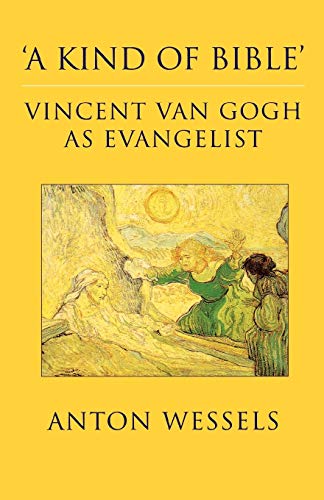 ‘A Kind of Bible’: Vincent Van Gogh as Evangelist

This translation from the prolific John Bowden might come as a surprise to those who know Van Gogh only as a turbulent artist, who abandoned an early attachment to the church and Christianity in favour of a deeply personal artistic vision. Anton Wessels, Professor of Missiology and Religion in the Free University, Amsterdam, argues that on the contrary, Van Gogh the artist was as much an evangelist as he had been when he was a young preacher-in-training, though he had left the institutional church behind.

Wessel’s style is terse, his chapters broken up into brief segments. It is an effective way of telling a story, particularly in the swiftly-narrated biographical sketch that opens the book. However, in the next section—‘Vincent as Preacher and Evangelist’, continuing to his dismissal at the age of 27 for over-radical application of texts and for working so hard that his health was put at risk—the author provides scant help to assess Van Gogh’s qualities as a preacher. More samples of his sermons would have been useful, and some indication of popular sermon styles of the period. As it is, Vincent comes across as a sincere and determined preacher without much gift of communication to the poor and illiterate. This doesn’t really fit with the accounts of the enthusiastic reception of his preaching by such congregations. We are told that his dismissal was for his lack of a preaching gift, notwithstanding a recognised social concern and a fine record of personal sacrificial work for the poor and disadvantaged.

Moving on to ‘Van Gogh as a Painter-Evangelist’, Wessels provides useful analysis of the various influences on the developing artist. Illustrating his argument throughout from Van Gogh’s writings, he argues that all his work was religious in character, exhibiting compassion and a sense of the worth and reality of ‘ordinary’ life. There is a consistent movement away from organised religion and an affirmation of simple peasant piety, general religious truth, and the example of hardworking clerics who served the people faithfully. ‘The Potato Eaters’ was, for its painter, a kind of holy family (81), and light assumes an increasingly religious significance. However, Wessels is careful to point out that Van Gogh does not oppose image to word but gives due value to both.

Van Gogh’s concept of Christ is discussed in an illuminating chapter. He was deeply influenced by à Kempis’ Imitation of Christ, admired Bunyan, and had an affinity with Rembrandt. Though he painted few biblical themes, he explored a Millet-inspired sower theme, created a Pieta heavily influenced by Delacroix’s use of colour, and painted a version of a Rembrandt etching of the raising of Lazarus. Wessel’s commentary on these works is fascinating, showing how colour for Van Gogh was a proof of reality, and how light continued to be a religious metaphor in his work.

He concludes with the necessary question of whether Van Gogh’s break from organised religion meant an abandoning of Christian faith. The chapter starts with a fusillade of rhetorical questions drawn from various commentators, probing various interpretations of the mature Vincent’s faith. One with which many readers will sympathise, following a classic exposition of Van Gogh’s visual language in John Berger’s Ways of Seeing (1972), is the view that images in Vincent’s later work symbolise a loss of faith. But the author argues that it was not Christianity that Vincent rejected but a version of Christianity, a rejection chiefly located in his break with his father. The artist, Millet became a substitute father, and beliefs such as Millet’s, a substitute for bourgeois Christianity. The case is well argued, especially in the discussion of light in Vincent’s thought and art, and by close attention to the letters as well as the paintings Wessels suggests a much broader interpretation of Vincent’s use of religious symbols than has sometimes been allowed.

This compact little book is packed with thought-provoking and well-documented argument and deserves to be widely read. My only lingering doubt is that many who have abandoned institutional religion in favour of a more broadly-based view of God have ended up believing in nothing at all. The thrust of this book is that Vincent van Gogh was not such a person; but to make an entirely convincing case would, I suspect, demand a rather more substantial book.