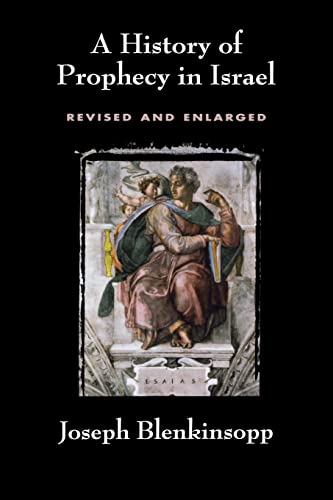 A History of Prophecy in Israel

In his introduction Blenkinsopp writes: ‘the only way to avoid the worst excesses arising from presuppositions of a theological or philosophical character is to keep on returning to the historical phenomenon of prophecy in Israel, which implies the attempt to make sense of its development throughout a long history, parts of which are very poorly documented. It would be easier … to eschew the attempt’ but one must ‘regain perspective on the phenomenon of prophecy as a whole’ (p. 13). His aim is to provide a critical history, not a thematic study of prophecy, and throughout he is particularly aware of the phenomenon of ‘inter-prophetic exegesis’ and the critiques of earlier prophecy which are so much a feature of exilic and post-exilic prophetic texts.

Blenkinsopp begins with a chapter on the prophets in the canon, as one might expect from the author of Prophecy and Canon. This includes a good survey of modern critical scholarship within the area of Old Testament prophecy. The subject is then reviewed historically from early Near-Eastern prophecy onwards (not much attention to Balaam in this section) and proceeds down to the eschatological re-interpretation of prophecy in Zechariah 9–14, and the radical critique of it in Jonah. It is in these later chapters that the student is best served, for Blenkinsopp has gone to great pains to provide as much information as possible about those periods of Hebrew and Jewish history from which we have least contemporary literature. His section on ‘Third Isaiah’ is a masterpiece of detailed and sensitive study, even though we are inevitably in the realms of speculation at this point.

Each chapter is followed by extensive notes, which point the reader to further recent discussion of points raised in the text, and these are usually enormously helpful. The sections are all preceded by useful bibliographies, though regrettably these do not take much notice of recent conservative scholarship in England. Good use is made of valuable monographs, such as that of Hans Walter Wolff on Micah, and indeed a feature of Blenkinsopp’s study is the way he has assembled the insights and discoveries of others and reported them in his own work. This is not to say he does not have some valuable insights of his own—‘Third Isaiah’ has already been mentioned—and his summary of the ministry of Ezekiel on pp. 206–207 is superb. But the chief value of this book will be to the student who needs to turn to a reference work in order to discover what is being said in modern critical scholarship about the prophets and their historical background. One may add that Blenkinsopp has a great eye for detail, and good sympathetic imagination, and the book is strewn with brief ‘throw-away’ remarks which are exceptionally shrewd and thought-provoking.

The hope of a new age: the kingdom of God in the New Testament

The date of Deuteronomy: linch-pin of Old Testament criticism (Part 2)

A taproot of radicalism

Genesis, with an Introduction to Narrative Literature

The Poet and the Historian: essays in literary and historical biblical criticism