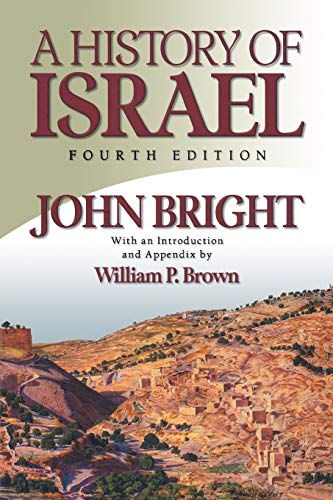 A History of Israel (Fourth edition)

Written by John Bright with an Introduction and Appendix by William P. Brown Reviewed By Brian Kelly
Old Testament

Since its first edition in 1959, Bright’s History has become probably the most widely influential textbook in its field, covering the period from before the patriarchs up to the rise of early Judaism. New, expanded editions were issued in 1972 and 1981 to take account of more recent archaeological evidence (or different ways of reading the data) and the developing sociological disciplines. There has been no rewriting for this version: the substance (23–464) is completely identical with the third edition, including its pagination. What distinguishes it are William Brown’s Introduction (1–22), which sets Bright’s work as a historian in context and explains the principles that underlie his magnum opus; and the Appendix (465–85), which presents an update on scholarship on the history of ancient Israel since 1981.

Both essays are of great value in appreciating Bright’s aims and achievements. In the Introduction Brown shows that Bright began by charting a relatively conservative course between the historical reconstructions proposed by Martin Noth (a fairly sceptical work of tradition criticism) and Yehezkel Kaufmann (a fairly literalist following of the biblical text). The differences which Brown notes from the first to the third editions are interesting illustrations of responses to changes and currents within the discipline in the 1960s and 1970s.

Three principles in particular governed Bright’s approach. First, archaeology was placed at the forefront of historical research as an ‘objective control’ on the biblical record. Bright remained indebted to his mentor Albright, following his 13th century dating of the exodus and conquest, and his generally positivist interpretation of the archaeological record. Alongside this, Bright came readily to agree that Israel’s origins and its occupation of the land were more diverse and complex than a superficial reading of the text might suggest (137–43).

Second, Bright had a basic, though not uncritical, confidence in the historical authenticity of the OT narratives. He believed (or hoped) that extra-biblical parallels from Nuzi and Ebla would corroborate the Bible’s portrayal of the patriarchs, and argued that 1–2 Samuel and 1 Kings 1–11 were virtually contemporaneous with the events described (37; 95–103; 184). Although he differed at some significant points in his historical reconstruction from the Bible’s own historiography, Bright largely affirmed the structure and content of the biblical narrative. At each stage of that narrative, as well, Bright sought to set the Bible’s account against the wider backcloth of the ancient Near East.

Third, Bright believed the history of Israel was also the history of its faith. It was the Mosaic covenant which gave Israel its true identity as a people delivered and constituted by Yahweh, and it was in obedience to that covenant that Israel sought to conduct itself throughout the course of its history. Mosaic Yahwism was aniconic and functionally monotheistic, a religion sharply in contrast with those of Israel’s neighbours (159–62).

These leitmotifs can be discerned throughout the work, and it can be readily appreciated how Bright’s work comported more or less with a moderately conservative Christian reading of the OT. However, as the Appendix succinctly shows, the critical landscape has changed beyond recognition in the past generation. If a consensus ever existed about the principles mentioned above, that has now broken down and each of them has become very problematic.

The archaeology of ancient Palestine is no longer practised (as it was under Albright) with a view to illuminating Israel’s faith and scriptures. Instead, archaeologists today attempt to reconstruct the history of early Iron I Palestine with only occasional reference to the Bible. In its place, anthropological and social-scientific methods are increasingly used in the task of historical reconstruction.

Second, the tendency in some circles to date the OT histories to the Persian and Hellenistic periods and the recognition of their ideological character are understood as factors that qualify (or even disqualify) their status as a reliable witness to the pre-exilic period. The lack of extra-biblical evidence for Abraham, Moses and David is cited in support of a minimalistic interpretation of the biblical data.

Finally, the character of pre-exilic Yahwism and the antiquity of covenant as a primary religious principle are hotly disputed on artifactual and literary-critical grounds.

Given these controversies, we may well understand the hesitations the new student has to step upon this terrain! However, as holders to a historical and incarnational faith, we must resist the temptation to treat the OT exclusively as theology, even if that is its primary character. The historiographical and literary dimensions of the Bible need also to be appreciated. The new perspectives for studying the past (which are often in conflict with each other) must be patiently understood and answered on their own terms. We await a new consensus on what ‘the new archaeology’ and social science methods can legitimately establish. In the meantime, Bright’s History is an enduring achievement from which the discerning reader will still profit, and its re-issue with these essays is warmly welcomed.