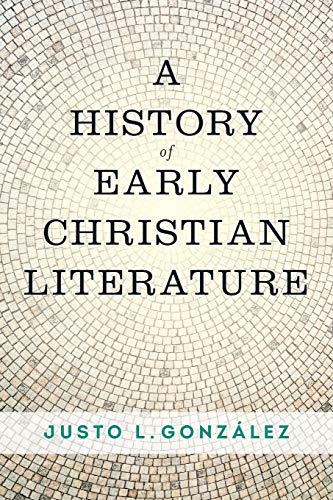 A History of Early Christian Literature

In his newest volume, Justo González displays a rich familiarity with the literature of early Christianity and the persons behind the work. By attending to these ancient sources, González brings the reader into contact with the enduring witness of our brothers and sisters of the faith, who “make themselves present to us by means of their written words” (p. 4) and lead us down “the trail of their experiences and their faith in the vast literary production that through the centuries helped shape Christianity” (p. 399).

Whereas González structures his acclaimed The Story of Christianity around historical events, in the present volume he provides a complementary companion of sorts, wherein he charts the development of theology around the framework of early Christian literature. The scope of the current project, though, is no less daunting. González covers approximately 675 years, addressing 83 authors, and many others in passing, totaling upwards of 415 texts representing 10 different genres—and all in under 400 pages! The six sections walk the reader through the great changes in the history of the church: part 1—the transition from the New Testament period; part 2—the “demographic and cultural change” of an increasingly Gentile church (p. 75); part 3—the beginning of systematic persecution and systemization of theology; part 4—the “golden century” of Constantine and the “century of iron” dominated by controversies (p. 175); part 5—arising differences between East and West; part 6—the “dusk of Early Christian literature” where the literary vitality of early centuries was lost (p. 375).

González unfolds the narrative with a steady hand, not getting bogged down in what oftentimes prove to be hot-button issues. For example, his treatment of both canonization and apocryphal writings (pp. 56–57) lacks the extended polemics that often characterize the discussion. Instead, he succinctly summarizes, “none of [the apocryphal writings] was ‘forbidden’ in the literal sense—among other reasons, because in those early centuries the church had no means to forbid books. They were simply excluded from among those that were to be read in worship” (p. 56). His pacing overall mirrors the metaphor he uses to describe the story’s original development: “placing one stone atop another so that others might follow along the same path” (p. 399).

González’s unique contribution is his ability to introduce remarkable depth in concision. His brief one-page introductions to each section include the historical setting, literary development, accomplished writers, and important themes of the ensuing era of Christian literature. This is also true when he engages the sources and persons themselves. With Athanasius, in a mere two pages (pp. 190–92), González outlines the main contours of his two great works, Against the Heathen and On the Incarnation of the Word of God, and summarizes Athanasius’s key, interlocking themes of anthropology, Christology, and soteriology with remarkable clarity and precision.

The diverse strengths of this book are most clearly epitomized in his treatment of Irenaeus of Lyons. Within the vast body of literature of that era, he intentionally engages one of the most influential but disproportionately “least commonly known” second-century theologians (p. 77). After a brief biographical introduction, González explains why he is difficult for the modern reader (the dense and polemical style of Against Heresies) and why he’s important (the significant insight he provides into second-century thought and his profound influence on Christian thought through Tertullian, the “father of Latin theological language” p. 79). He then guides the reader to where she can look to develop Irenaeus’s theological contribution. González then devotes an entire section to Irenaeus’s theology, showing both a broad understanding of his vision as well as familiarity with the particular nuances of his thought. To exemplify those two poles, he summarizes Irenaeus’s understanding of “the cosmic drama” (p. 82), the “sweeping vision of history in light of the redemption” (p. 87) that God works with his two hands (the Son and Holy Spirit), beginning with creation and culminating in the resurrection. Then González zeroes in on his unique contribution of “recapitulation,” correcting our current understanding—“a mere summary of what has gone before”—with Irenaeus’s own usage of “taking all of (history) to its culmination … joining all things under a single head” (p. 85). In this way, González introduces the reader to the nuance of patristic theology that is not always expected, nor at times anticipated, from other historical introductions. And he does all of the above in ten pages (pp. 77–87)!

The main critique of this work is that the impressive theological introduction González provides with Athanasius and Irenaeus (see also the Great Cappadocians, pp. 217–26, and Augustine, pp. 292–311) leaves other sections, by comparison, to appear too dense with historical development and too little primary text engagement (note especially his treatment of Hilary’s On the Trinity, and the near absence of Cyril’s influential contribution On the Unity of Christ). However, such a critique is perhaps unfair considering both the scope and purpose of this text. As González himself reminds readers elsewhere, “It is impossible to satisfy both those who want more on a given subject and those who want less” (The Story of Christianity, Vol. 1: The Early Church to the Dawn of the Reformation [New York: HarperOne], xvi).

In this work the reader will find a lively introduction to early Christian literature. In addition, it will serve as a helpful compendium of Christian authors up to the 8th century, as well as a sourcebook for the major works of theology in the Early Church. While it may be too dense for some to read cover-to-cover, this book can still serve as a useful reference.