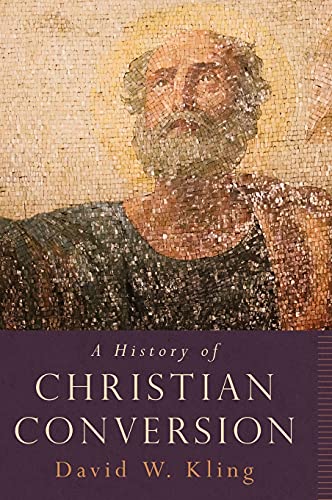 A History of Christian Conversion

David W. Kling, department chair of religious studies at the University of Miami, has written an intriguing survey of the history of Christian conversion—a complex phenomenon that is integral to Christianity.

In the preface, he argues that even though “conversion studies have [greatly] proliferated,” a survey of “Christian conversion” that is “contextually sensitive, historical, and thematic” is lacking. It is this kind of survey, then, which Kling seeks to provide. Kling notes that the book’s size does not mean it is comprehensive. He discusses four limitations. First, there are geographic omissions. Second, while autobiographical accounts are present, not all “well-known … conversions” are included. Third, the “interactions between Christianity and other major religions” do not receive “sustained attention throughout.” Finally, while Kling does engage with “theology and mission studies,” his aim is not to write “a book on the theology of conversion nor a history of missions” (p. xii).

Before diving into the main body of the work, Kling offers an “anatomy” of conversion in the introductory chapter. Drawing from “Lewis Rambo’s seven stage model of conversion,” he analyzes the account of his “late father, Gordon Kling (1917–2011)” as a lens for understanding the phenomenon of conversion (p. 2). This analysis, with its attention to various approaches to Christian conversion, gives a window into how Kling will address conversion—a phenomenon that, for him, “remains … inscrutable,” defying “full explanation” (p. 23).

After the introductory chapter, the book is divided into seven parts, each consisting of multiple chapters. Parts 1–4 deal with the Roman world, Europe, and the Americas, and so, in the main, the Western context is in the forefront, an area familiar to students of church history. Somewhat off the beaten path is part 4, which surveys black and white expressions of evangelicalism (ch. 15) and Protestants and Pentecostals in Latin America (ch. 16). Parts 5, 6, and 7 deal with China, Indian, and Africa, respectively, and thus are more likely to be found in a history of missions.

In each chapter, Kling often sets up the context, surveys the topic (e.g., forced conversions) chronologically, with geographic subsections (e.g., England), followed by concluding remarks. If the material allows for it, he also gives attention to individual accounts of conversion. These allow Kling to provide the reader with a fuller sense of how conversion was viewed in a particular time (and, if relevant, place).

Given the breadth of this book, some salient features will be mentioned to give the reader a sense of Kling’s offering. After summarizing various reasons why New Testament conversion accounts “do not fit neatly into contemporary explanatory models [e.g., economic, psychological],” he writes, “perhaps the most critical reason is the fundamental New Testament assertion … that conversion is ultimately a result of God’s initiative” (p. 28). Moreover, he argues that the closest ancient parallel to NT conversion is found in philosophy (e.g., Stoic, Epicurean) and pushes against the idea that Paul’s conversion was a relief from “his guilty conscience” (p. 46).

Commenting on conversion in the early church from Paul to Constantine, Kling argues that “the gospel did not spread through [e.g.] evangelistic rallies,” but “along the lines of social networks or face-to-face encounters” (p. 56). Regarding the vexing question of the legitimacy of Constantine’s conversion, Kling offers several reasons why “the Eusebian version of Constantine’s conversion” is problematic, such as Constantine’s view of Christ as a “divine patron” rather than a “suffering Savior” (p. 74), his retention of “the unconquerable sun god Sol Invictus” on his coins, and the fact that Eusebius’s description was “shaped by his own purposes, centered on … the expansion of Christianity” (p. 75).

In his survey of English Protestantism (1520–1700), Kling suggests, following Peter Marshall, that the ability to systematize one’s conversion experience was, arguably, the main factor that gave shape to a developing Protestantism. Remarking on the Puritan “stress on the individual temper,” Kling contends that it “gradually subjectivized the Protestant movement and gave rise to revivalism and a form of evangelicalism that made conversion the benchmark of the Christian life”; therefore, the “headwaters” of evangelicalism “are found in the Puritan movement” (p. 273).

Kling’s survey of the history of Christian conversion is a significant undertaking as he is deeply conversant with the relevant secondary literature and nuanced in his survey of the various approaches to conversion throughout church history. Though Kling primarily relies on secondary sources (and so one may quibble with his lack of engagement with primary historical documents), it is clear, as evidenced by the bibliographical notes, that he has distilled a lifetime of reading into one book and as such he brings to the budding historian’s attention many avenues for further study.

A few criticisms need to be noted. First, the methodological rigor in his analysis was uneven, with some chapters having more overall depth than others. Second, he often resorts to choosing very well-known conversion stories such as Martin Luther and John Calvin. Why not a lesser-known figure such as Martin Bucer? Third (and connected to the second criticism), we wonder about the overall usefulness of this large book in a classroom setting. Kling’s book, while emphasizing conversion, has significant overlap with multiple kinds of historical surveys. Is it best used as a church history text, a history of missions, or something in-between? The audience may not be evident to all. Fourth, there is a noticeable lack of engagement with more recent autobiographical conversion stories such as The Heavenly Man or The Death of a Guru or movements such as Messianic Judaism. Attention to some of these stories/movements would have strengthened his project. To conclude, this is required reading for anyone interested in Christian conversion and will be useful for any student of church history. Recommended.