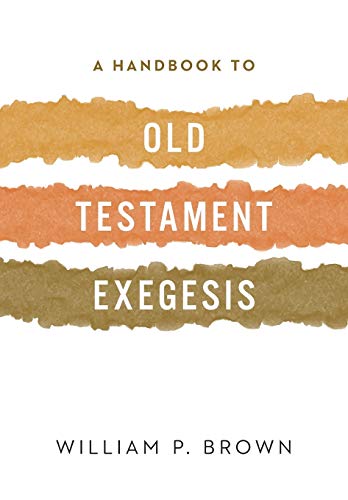 A Handbook to Old Testament Exegesis

William P. Brown is the William Marcellus McPheeters Professor of Old Testament at Columbia Theological Seminary. He has published widely, most recently in relation to Wisdom Literature, Psalms, creation, science, and ecology. A Handbook to Old Testament Exegesis brings this broad-ranging experience to bear on the how-to of interpreting the Hebrew Bible. The prologue clarifies Brown’s purpose and rationale. His aim is to “develop a fresh, example-filled introduction to exegesis of the Hebrew Bible that brings together various exegetical perspectives … in a way that cultivates the reader’s curiosity, critical engagement, and empathetic imagination” (p. ix). The larger goal is to develop a “hermeneutic of wonder” with respect to the inexhaustible depth of the Scriptures, thereby opening the potential for personal transformation (p. ix).

The volume is divided into four parts. Part I addresses the reader. This section is driven by Brown’s (correct) conviction that interpreters do not approach the biblical texts as blank slates. Rather, they come with a complex raft of pre-existing assumptions, theological traditions, values, and so on. In light of this, Brown suggests a prerequisite necessity for “self-exegesis”—that is, explicitly identifying the tendencies one has to read texts in certain ways (p. 11). As Brown rightly notes, this is an interpretative step that is frequently overlooked. Accordingly, a scheme for developing an “exegetical self-profile” is provided, along with five worked examples (pp. 12–19).

Part II traverses a sweep of analytical approaches. Brown proceeds systematically, starting with translation and lower text criticism (i.e., the weighing of manuscript evidence to determine the most reliable text), before moving on to consider stylistic analysis of narrative and poetic texts (chs. 4–7). Chapters 8–12 then explore, in turn, structural, compositional, comparative, literary, and historical methods. A final chapter looks at canonical analysis which, for Brown, consists not so much in the tracing of themes through the Scriptures, but rather considers how biblical texts interact with each other (e.g., how Psalm 22 is echoed in Mark 15 [pp. 179–81]).

In each of these chapters, Brown’s procedure is the same. An introduction to the approach is given first, setting parameters and raising key questions. Core principles are then worked out in relation to several example texts. In the concluding section of each chapter, combined insights are applied to the creation narratives (i.e., Gen 1:1–2:3 and Gen 2:4–3:24). Pedagogically, this is a superb strategy as readers see each methodology applied to the same two texts, layers of additional insight are generated. This has a twofold benefit. Not only does a more rounded picture of the narratives emerge, but readers are implicitly convinced of the need to utilize multiple approaches to avoid reductionistic readings—here, and by implication, for all biblical texts.

Ideological interpretation is the focus of Part III. Chapters 15–22 engage with perspectives derived from science, ecology, gender, empire, minority, disability, and theology. Although any one of these approaches can end up becoming an interpretative grid imposed upon the Bible, obfuscating the text rather than clarifying it, Brown also demonstrates the utility of these methods as a means of uncovering things our own context blinds us to. By way of example, chapter 15 explores the influence of science and scientific thinking on the process of biblical interpretation. The key question concerns how to interpret the Hebrew Bible in light of science without compromising either science or the wisdom of the biblical text (p. 202). As Brown astutely notes, one frequent obstacle facing this outcome is either ignorance or suspicion regarding the sciences. Instead, he makes a plea for those involved in theological education to increase “cultural competence” in order to facilitate better dialogue (p. 203). Brown demonstrates the kind of dialogue he has in mind by reading Genesis 1 in light of cosmology, and bringing Genesis 2–3 into conversation with human evolutionary biology (pp. 206–22)—revealing both “collisions” and possible “consonances.” While not everyone will find Brown’s conclusions convincing, the model of thoughtful (even playful) engagement is stimulating. Moreover, it underscores another of the book’s central convictions: the need to read biblical texts as part of a (diverse) community of interpreters.

Finally, Part IV turns to consider communication, or what Brown terms “re-telling the text” (p. 329). The question here is how to communicate the text in such a way that will benefit recipients in particular times and contexts—a process that must involve exegesis of one’s audience. Again, to demonstrate, Brown turns to Genesis 1–3, this time providing a sermon on Genesis 2:4b–15 and a three-part lesson plan for teaching Genesis 1. Both lesson plan and sermon draw upon explorations of Genesis 2 conducted throughout the book and serve as reminders of those discussions by way of allusion to phrasing used in earlier chapters.

A Handbook to Old Testament Exegesis is skillfully crafted and its style is engaging. It is comprehensive without being exhaustive (or exhausting). While more could always be added, Brown has surveyed the most important current trends in Old Testament hermeneutics. Moreover, what are often complex fields of study in their own right are made accessible. In saying that, however, I did wonder whether undergraduate students would struggle at times. In places, there seems to be a degree of assumed knowledge (being familiar with the concept of narrative gaps, or subtexts, for instance [p. 22]). Nevertheless, Brown’s liberal use of worked examples—and especially the running example of Genesis 1–3—ground theoretical discussion in concrete case studies. Theory is thus made practical while at the same time displaying the interpretative benefits that stem from careful articulation of theory. An added boon throughout are the chapter bibliographies. This veritable goldmine of secondary literature provides avenues for the keen to continue their exploration of a given method. This book thus does exactly what any good introductory volume ought to do: distill scholarship to an able-to-engage level and excite the imagination regarding the potential. Adapting Brown’s own phrasing: in the end, no method or combination of methods will ever capture the full sense and power of the Old Testament Scriptures. All we can hope for as limited interpreters is to have “mystery deepened by understanding” (p. 66). Brown’s Handbook to Old Testament Exegesis aids that end admirably.