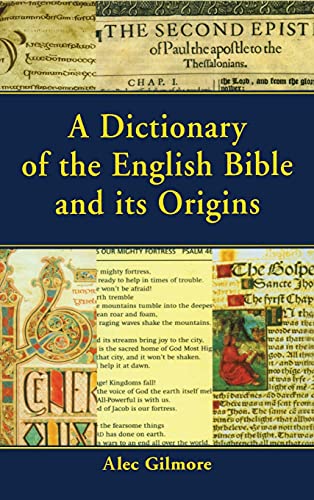 A Dictionary of the English Bible and its Origins

This somewhat curious reference work is a listing of all the names, places and versions of the Bible which have gone into the making of the number one best-seller in the English language ever since printed translations became readily available in the late sixteenth century. The author must be congratulated for his breadth of coverage, which extends to German and other scholars who have made a significant contribution to Biblical scholarship, and also for the way in which he has highlighted special subjects in separate boxes. For example, under ‘glosses’ he takes the trouble to give several examples from both the Old and the New Testaments. He does the same for ‘harmonisation’, ‘lectio difficilior’, ‘corruptions’, ‘dittography’ and a host of similar topics which are seldom explained in as concise and informative a manner as this.

The book is also of great value for those times when you need to know what the New Century Version is, or what Miles Smith did. Such occasions are admittedly rare as far as most of us are concerned, but they do occur, and it is often not easy to find the necessary information at short notice. Just reading this book through is an education in itself, and it would make an ideal gift for a student who is beginning a course in Biblical Studies. It is also the sort of book which every pastor should have to hand as a resource for answering those obscure questions which some churchgoers have a way of asking.

The book is so wide-ranging that its main fault seems to be overkill, as when the author includes the following as a separate entry: ‘Istanbul, Turkey. The modern name for Constantinople.’ Similarly there is an entry for ‘clay’, which tells us that it was used by the ancient Sumerians as writing material and one for the Solway Firth, pointing out that it is the site of the Ruthwell Cross, on the old pilgrim way from Lindisfarne to Iona. All very interesting of course, but only marginally related to the dictionary’s main theme.

In terms of theological stance, the book is as neutral as it is possible to be, and generally avoids passing controversial judgements. For example, Mr Gilmore describes ‘Q’ as a non-Marcan source common to Mathew and Luke without pronouncing on whether it ever had an independent existence of its own. This kind of scholarly reticence increases the value of the dictionary, since the reader can be fairly certain that he will be given the simple facts, and not a particular interpretation of them. Evangelical readers will be particularly grateful for this, since in the opening paragraph of his preface the author makes it clear that he has no time for them, calling them ‘people who had either got on the wrong bus or not been sharp enough to alight in time and strike off in a different direction’. So blatant an expression of his own prejudices is singularly unfortunate, since many prospective buyers will probably read that and put the book straight back on the shelf. That would be a pity, because the book itself does not reflect its author’s bias in this respect and will make a very useful addition to any theological library.