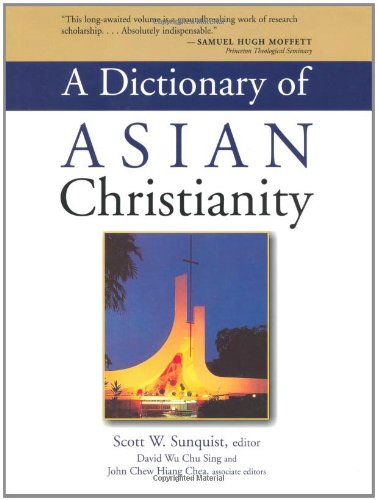 A DICTIONARY OF ASIAN CHRISTIANITY

A Dictionary of Asian Christianity is truly a remarkable book that will become a significant reference for the study of Christianity in Asia. The volume contains 1,260 articles written by leading scholars in the field, and they provide up-to-date information on the political, social and religious movements of the region. The Dictionary emerged to meet two needs. First, Asian scholars required a scholarly source of information for reference and for their students. Secondly, issues of racism and nationalism have affected much of Asia, and although some work has been done by scholars in particular countries, there has been no consolidation of their work for Asia as a whole. Commencing with a small gathering of the faculty of Trinity Theological College, Singapore in 1990, various consultations were instituted, editors appointed and the articles drafted.

The problem with co-operative projects such as this one is that there are often notable differences in the quality of the articles. I have been impressed by the consistent quality of the articles in this volume which is obviously the result of careful editing. The topics covered include people, countries, denominations, religions and philosophies. There are major articles on the Anglican Church, Buddhism, colleges and universities, China, India, nationalism and theological education. The shorter articles contain a rich resource of material on lesser known topics. For example, page 322 provides a cameo of Hendrik Hamel (1630–92), a Dutch crewman who through his writings introduced the country of Korea to Europe. On page 429 there is an article on the Kachin people who number about one million and live in the highlands at the intersection of China, India, Myanmar and Thailand. Page 640 provides a description of Parmalim syncretistic movement of North Sumatra among the Batak people. The volume therefore provides an immediate and accurate source of information for scholars and students.

The volume, however, is not just a reference book to be referred to occasionally about a particular topic. The editors have included a simple system of cross-referencing. For example, if one refers to the major article on China cross-references are made to the Nestorians, Zoroastrianism, William of Rubruck, Jesuites, Xu Guangqi and more on just the first two pages of the article.

The Dictionary is built around the understanding that Christianity has developed in dialogue with its own particular local context. It tries, therefore, to examine the forces that have moulded the Church in that country. In Pakistan for example, it has been Islam that has been the major influence. Reference is given, therefore, not only to the history of Christianity in that country, but also to national issues such as General Zia-ul-Haq’s process of Islamisation that commenced in 1977 and the Law of Blasphemy. The Dictionary introduces the varied experiences of Asian Christians in the areas of theology and social concern, and identifies many leaders of the churches in Asia.

This is an outstanding volume that will be a significant contribution to any library. It will be an important source of reference to all interested in that half of humanity living in Asia. I am sure I will continually refer to this book.