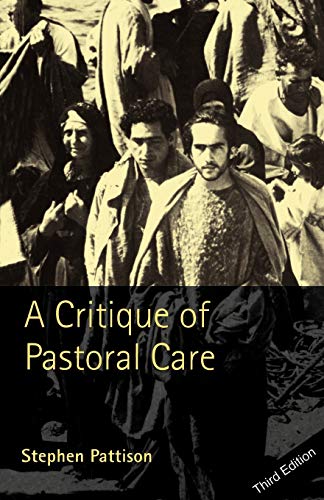 Written by Stephen Pattison Reviewed By Noel Due
Ethics and Pastoralia

Since its first appearance in 1988 A Critique of Pastoral Care has been recognised widely as a foundational book in the study of contemporary pastoral theology. This edition incorporates the original text of the first edition, the ‘Afterword’ added in the 1993 edition, and the complete text of what originally appeared as a Contact monograph, ‘A Vision of Pastoral Theology: In Search of Words that Resurrect the Dead’.

For those unfamiliar with the earlier editions of the book, the Afterword provides a commentary on Pattison’s thinking on each of the original chapters. In it he identifies areas with which he might now disagree, or in which his convictions have been strengthened, or areas which require further thought and investigation.

The opening contention of the book is that ‘an uncritical attitude to pastoral care is indefensible, irresponsible and even dangerous’. In the place of such non self-reflective pastoral practice, Pattison argues for the necessity for pastoral carers to gain proper perspective on their work, which by contrast ‘prevents boredom, stimulates innovation, impedes unhelpful naivety and gives a sense of direction and purpose to pastoral care’ (Introduction).

Chapter one examines questions of definition. Chapter two then gives a brief overview of developments in contemporary pastoral care theory, particularly in the USA. There follows six chapters with a variety of headings (e.g. Ethics and Pastoral Care; Discipline and Pastoral Care; The Bible and Pastoral Care) each of which explores the nexus between theory and practice.

The style of the Essay that now concludes this volume is in marked contrast to the rest of the book. Its aim is ‘to stimulate, interest and provoke’, for the purpose of reopening discussion as the very nature, goals and methods of pastoral theology. The style is in keeping with the aim. It is full of image, symbol, metaphor and simile, raising more questions than it answers.

The book has considerable strengths. Firstly, it embodies the very model of reflection for which Pattison argues. In reading the original chapters, the Afterword and the Essay, the reader is given an insight into the author’s own journey and his awareness of the processes this has involved. These bear testimony to the flexibility and plurality of approach for which Pattison seeks to enthuse us in the Essay. Secondly, the book continues to provide students of pastoral theology with a thoughtful interaction with many of the contemporary issues, trends and writers in the field. Thirdly, the book discusses key areas of both content and process in pastoral theology, and endeavours to explore the relationship between them. This continues to be necessary, since the tendency is often to divorce these elements, thus resulting in mere pragmatism.

One cannot review the book, however, without being aware of some of its weaknesses. The ‘compilation’ approach does not make its themes easy to follow, and I would have preferred to see a more integrated reworking of the book, rather than simply a reissuing of component parts. In addition, the book suffers from a lack of integration at key points. The question of definition is a prime (and foundational) example of this. The original definition of pastoral care that is offered in chapter one (13) is essentially biblical. This definition is questioned in the Afterword (195) and lost altogether in the Essay, by which time the relativist and pluralist approach, latent in much of the book, is completely to the fore. The establishment of criteria for raising a thoughtful, biblical and irreducibly Christian critique of pastoral care in such an environment becomes increasingly difficult.