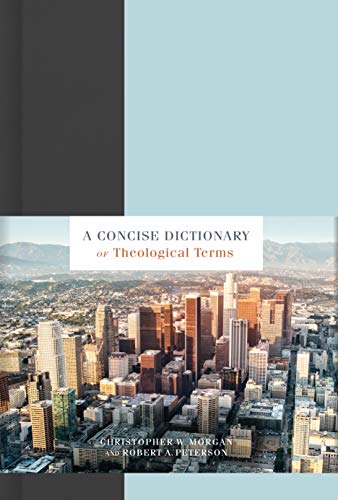 Written by Christopher W. Morgan and Robert A. Peterson Reviewed By Eric B. Oldenburg
Systematic Theology

Evangelical theologians Christopher Morgan and Robert Peterson have done a tremendous service to the church, especially to those in the early stages of their theological journey. Alongside their clear and fresh systematic theology textbook (Christopher W. Morgan with Robert A. Peterson, Christian Theology: The Biblical Story and Our Faith [Nashville: B&H Academic, 2020]), the authors have provided the companion volume reviewed here: A Concise Dictionary of Theological Terms.

As helpful as they are for academic theological research, many theological dictionaries are intimidatingly large, and the entries, at times, can be overly complex for non-professional theologians. Morgan and Peterson’s compact accessibility fills a much-needed gap in the theological landscape. With clarity and brevity, this dictionary enables readers of the textbook to dig deeper into the meanings of unfamiliar terms. But the dictionary is not designed merely for those working through the textbook; it is an invaluable resource for anyone doing introductory reading in theology. Instead of reaching for a thousand-page volume containing entries much longer and more complex than needed for a budding theologian, he or she can grab Morgan and Peterson’s dictionary and become acquainted with terms in just a minute or two.

The greatest strength of Morgan and Peterson’s dictionary is its focus on the most relevant and core elements. Some examples highlight the usefulness of this tool:

In a book of this size, the authors had to make decisions about what to include and exclude. One observed weakness revolves around some of those decisions, particularly regarding which historical figures they included, and those they did not. While I understand and appreciate the inclusion of figures like James Cone (p. 39), Joni Eareckson Tada (p. 51), Ajith Fernando (p. 63), Gustavo Gutiérrez (p. 72), and Susanna Wesley (p. 173), to its detriment this introductory dictionary excludes historically influential figures like the Cappadocian Fathers Basil of Caesarea, Gregory of Nyssa, and Gregory of Nazianzus, as well as Francis of Assisi and George Whitefield.

Another weakness concerns the style of some entries given the nature of dictionaries, in general. When addressing disputable matters in a textbook—issues like the nature of hell or God’s foreknowledge—one expects that the author will make a personal, scholarly judgment based on his or her evaluation of the evidence. But in a dictionary this short, one can reasonably expect a brief presentation of various sides of a controversy and, if space allows, strengths and weaknesses of each view. This allows for the reader to return from his or her dictionary search to whatever he or she might be reading with a working understanding of the debated issue, ready to engage with the expressed propositions of the author. In a number of cases, Morgan and Peterson step out of dictionary writing mode and declare certain teachings—e.g., Annihilationism (p. 4), Open Theism (p. 126), and Universalism (p. 170)—as “serious” or “major” errors, when many proponents of such teachings identify themselves on the evangelical theological spectrum. Certainly, we should all have our convictions about such issues, but a dictionary aimed at being a “a reference book … to look up words you don’t fully understand” (p. x) should leave readers free to come to their own such convictions, rather than making such judgments for them.

The aforementioned weaknesses are minor in comparison to the book’s many strengths. In contrast to the few instances of making judgments rather than giving descriptions, the authors most often present multiple sides of controversial issues with fairness, such as entries on the Lord’s Supper (p. 109) or the Millennium (pp. 115–17). In regard to the latter, after a balanced presentation of amillennialism, postmillennialism, historic premillennialism, and dispensational premillennialism, the entry closes with an explication of the core tenets that all four views hold in common, which builds unity rather than sowing seeds of eschatological division. And when addressing certain church historical events that fall outside the circle of evangelicalism, the authors’ evenhandedness remains consistent. While they likely disagree with certain deliverances of Vatican I and II (p. 171), Morgan and Peterson present these landmark decisions in the Roman Catholic Church with straightforward equity and informedness.

For the reasons stated above, and many others beside, I will highly recommend A Concise Dictionary of Theological Terms to my introductory theology students. For anyone else just stepping out on their theological journey, Morgan and Peterson will prove excellent guides.