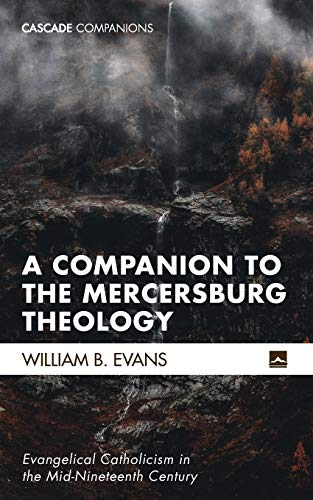 A Companion to the Mercersburg Theology: Evangelical Catholicism in the Mid-Nineteenth Century

Written by William B. Evans Reviewed By A. T. B. McGowan
History and Historical Theology

A Companion to the Mercersburg Theology is the latest book in the “Cascade Companions” series, introducing us to a school of thought which has generally been overlooked and yet has the potential to assist in many of our current theological and ecclesiastical debates. The author, William Evans, is not only an extremely competent historian and theologian, but he also has a keen eye for current relevance. He highlights both the strengths and the weaknesses of the Mercersburg Theology and his analysis of the movement is both fair and challenging.

The primary focus of the Mercersburg Theology, as is clear from every chapter in the book, was the doctrine of the church. The Mercersburg scholars consciously developed their theology of the church over against American evangelicalism and revivalism, which they believed had departed significantly from the theology of the early church and even from the theology of Calvin and the Reformers. They were also willing to identify with and learn from aspects of Catholic theology. As Evans writes, “Over against a liberalism that sometimes views the church as little more than a collection of resources that may assist social improvement efforts, and an evangelicalism that views the church as a helpful but less-than-essential aid to the piety of individual Christians, Mercersburg took the church with deadly seriousness. The church is nothing less than the sphere of divine salvation on earth” (p. 129). This led Nevin and Schaff to emphasize the importance of the unity of the church in the face of the religious individualism of America which had led to a proliferation of denominations and sects.

They were also clear that the church is the place of salvation and not simply a gathering of individuals who happen to be Christian. This had two theological consequences. First, it led to a strong participationist theology, whereby union with Christ becomes the central doctrine of salvation. In this participationist understanding of salvation, they identified with some of the early fathers of the church, as well as foreshadowing the work of Karl Barth and especially T. F. Torrance. Second, this view of the church led naturally to a high view of worship and the liturgy. They argued within their denomination for a return to a more structured and theologically considered service of worship. This understanding of the church led to a high view of the sacraments. As Evans notes, for Nevin, “Baptism signifies Union with Christ and this union actually takes place; the Lord’s Supper is a real communication of the incarnate humanity of Christ to the believer” (p. 94). Indeed, Nevin argued that the sacraments had a certain priority over the Word and that we can use the term “baptismal regeneration,” if carefully defined. In this sacramental emphasis many thought that the Mercersburg theology had moved very close to aspects of Roman Catholic theology.

Through the influence of scholars such as Hughes Oliphant Old, who first taught at Princeton and then was the John H. Leith Professor of Reformed Theology and Worship at Erskine Theological Seminary, many Reformed ministers have begun to rediscover the value of liturgy and a higher view of the sacraments. These trends should encourage us to re-examine the Mercersburg Theology. Among other things, it offers a corrective to the divisive and schismatic approach of many within Protestantism and forces us to take the nature and purpose of the church seriously as the instrument of God for salvation.

This book by Evans provides a short, but excellent introduction to the Mercersburg theology, together with a historical and theological analysis of the significance of the movement. Even those students of theology who have little or no interest in 19th century Presbyterianism ought to read this book, not least to help them understand that Reformed theology is a school of thought with many strands. Evans helps us to see that certain aspects of Reformed theology, which might be taken for granted in American Reformed circles, can be challenged and reviewed by other strands of the movement.