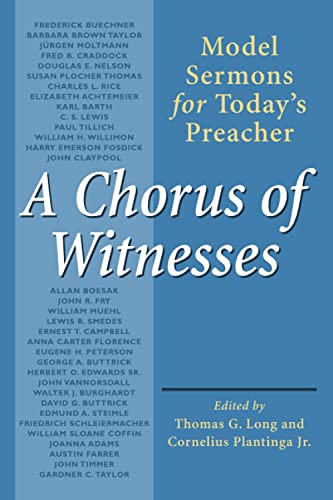 A Chorus of Witnesses: Model Sermons for Today’s Preacher

To learn by example is to acquire aptness without pain and embarrassment. Students and teachers of preaching have long recognized the benefit of learning at least part of the preaching craft through the preaching of others. From this premise, Thomas G. Long and Cornelius Plantinga provide A Chorus of Witnesses, a varied and inspiring anthology of 36 sermons. As the editors contend in the preface, ‘We have chosen, arranged, and introduced the sermons of this volume in the hope that people will ponder, inspect, disassemble, praise, criticize, and generally, learn from them. (Some of these sermons pack enough of a spiritual wallop that they will also edify readers)’ (p. x).

The sermons and the preachers emerge from assorted theological and hermeneutical commitments. The preachers include parish pastors, chaplains, theologians and homileticians, men and women, Europeans, South Africans, Americans, Canadians and African-Americans. All but one of the sermons are from the 20th century. Conservative evangelical students of preaching will immediately recognize Eugene Peterson, Lewis Smedes and C. S. Lewis. The conservative offerings are sparse, however, and such notable preachers as Haddon Robinson, Charles Swindoll, Harold Ockenga, John Piper and James Boice are conspicuously absent. The theologians include Barth, Tillich, Schleiermacher (also a pastor), Moltmann and William Muehl. Homileticians include Elizabeth Achtemeier, George and David Buttrick, Charles Rice and William Willimon. Preachers of non-evangelical positions include Henry Emerson Fosdick, Ernest Campbell and William Sloane Coffin.

While the editors offer little critique, they introduce each sermon with a modest statement of the rationale for its inclusion. The sermons appear in four categories, though many of them could have been placed in more than one category, as the editors concede. In the first division, ‘The Sources of the Sermon’, the editors explain that ‘every sermon at least extends and amplifies its source; many sermons do much more’ (p. 1). The sermons of this category show diverse proficient ways of approaching, developing and presenting texts and genres of texts. For example, Frederick Buechner masterfully recounts Jacob’s wrestling (Gn. 32) through an ironic twist about acceptable dishonesty. The sermon uses the sequence of the text to build sermonic tension, only to provide a modicum of relief with the observation that God is supreme in life’s cardinal and futile pursuits of happiness, success and power.

The second category provides examples of “The Aims of the Sermon’. Karl Barth’s classic ‘Jesus is Victor’ is the first offering. Barth states and restates the resurrection and its power. He aims to declare victory and beckon the rightful response of submission to the empowering. Also included is C. S. Lewis’s ‘The Weight of Glory’, a sermon to be read by every young preacher and to be revisited by all others. The third category presents ‘The Forms and Dynamics of the Sermon’. Evangelicals in particular will profit from Eugene Peterson’s sermon, ‘My Eyes are not Raised Too High’. Peterson allows the text to guide the direction of the sermon, though the virtues of calm confidence and quiet strength comprise his topical destiny.

The final category, ‘The Occasions of the Sermon’, recognizes that much of preaching takes place in contexts with readily identifiable expectations and exigencies. This final section presents sermons for occasions such as holidays, grief and controversy. Among the offerings are two sermons of historical renown: Schleiermacher’s ‘Sermon at Nathanael’s Grave’ and Fosdick’s ‘Shall the Fundamentalists Win?. Preachers of all theological persuasions will ponder Gardner C. Taylor’s Good Friday sermon, ‘His Own Clothes’, with a new distaste for false accusation and human cruelty.

To gain full benefit from this anthology, readers must move between each sermon’s vices and virtues. Readers will effortlessly appreciate some sermons for their theological import while rejecting the rigidity of style or inept form. Other sermons will enlighten the reader via form and illustration while much of the theology may be rejected. Though the 36 short chapters (sermons) read quickly, they require a critical eye and ear. For the reader willing to reflect, there is much to learn from these examples.