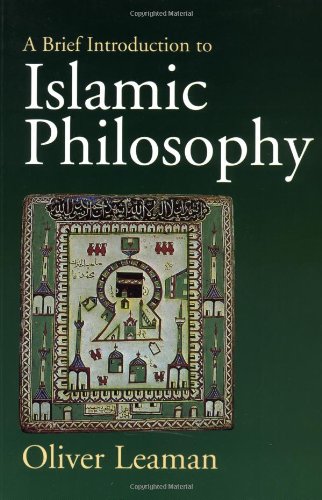 A Brief Introduction to Islamic Philosophy

This is not Leaman’s first effort at producing an introduction to Islamic philosophy, as he points out in the preface. However, in this latest work the author’s thinking has developed to the point where he no longer sees the Peripatetic/Greek tradition of Islamic philosophy as being singularly normative. He is now committed to giving a significant proportion of his attention to the other two great streams within Islamic philosophy: the mystical/Sufi tradition and the illuminationist/Ishraqi tradition.

This work engages with wide ranging themes that bear on the main topic. Leaman does not ignore any of the big issues, tackling subjects as diverse as the nature of the source of authority; the debate regarding the respective places of reason and revelation; the creation versus emanation debate; and the nature of time, in terms of divergent approaches to ordinary time (since creation) and supernatural time (eternity). His commitment to dealing with diverse topics is mirrored by a determination to summarise the thoughts of diverse but key philosophical writers within the Islamic tradition. He considers such prominent names as al-Kindi, al-Farabi, Ibn Sina/Avicenna, al-Ghazali, Mulla Sadra, and the great Ibn Rushd/Averroes, who has received considerable attention from Western philosophers. Nor does Leaman restrict himself to classical writers, for he takes the time to consider such modern Muslim thinkers as Muhammad Iqbal. Leaman is thus committed to engaging with the diversity of Islam, which is a necessary approach given the tendency to stereotype Islam in monolithic terms in more popular writing.

Leaman selects a range of writing techniques which are very appropriate to an introductory text, and which ease the reader into what at times is a very difficult and mind-bending subject. He often introduces a key theme by asking questions, such as ‘what can be known according to Islam?’ (57); ‘what is knowledge for?’ (59); ‘how important are symbols in pursuit of knowledge?’ (61); ‘what is the highest level of knowledge which we can achieve?’ (62); and ‘what enables us to say that one person is different from another person?’ Such a question-answer approach is effective in providing signposts to the novice reader.

Another useful technique which Leaman uses to similar effect is to ground rarified discussion in modern-day events. Thus in addressing the question ‘what can God know?’, Leaman relates the arguments to questions regarding government and corporate management in contemporary Britain. Elsewhere, in presenting the notion that rulers who are more concerned with theoretical concepts become ideal rulers, the author compares this with arguments regarding gun control in Britain in 1996. This technique serves well to keep those readers on board who might otherwise slip off the edge of discussion which is too esoteric.

Some of Leaman’s assumption bear further thought. He comments in the preface that ‘… one does not need to be committed to any particular religion, or indeed any religion at all, to understand Islamic philosophy’ (ix). Though this is perhaps true, Leaman seems to imply that an a-religious position is somehow more objective, ignoring that such a perspective is no less value-laden than a perspective from within a particular religious stream.

In considering the imperial expansion of Islam in the century following the death of Muhammad in 732 AD, Leaman suggests that Muslims consciously chose to take on board non-Muslim ideas and systems. He seems to ignore the fact that Islam itself was in such a state of flux during its first 150 years that it was not a matter of consciously choosing to use non-Islamic knowledge. Rather it just happened as a response to need, reflecting gaps in the system of Islam at that time.

Leaman makes a number of fascinating observations that many contemporary Muslim scholars might challenge. For example, he rejects the often-heard claim that Islam is more compatible with science than other faiths (53), saying that such a claim implies that the present state of the natural sciences is final. Furthermore, he comments that ‘… the first effect of Islamic philosophy on Western thought was that it paved the way for the strict separation of religion and the secular’. (145) In the climate of widespread contemporary Muslim criticism of Christianity’s retreat from the public arena, such a statement would bring howls of protest from some Muslim polemicists.

This is a valuable work and would be well suited to survey courses on Islam at the undergraduate level. Leaman has clearly envisaged this, as he has included a copious bibliography and suggestions for further reading. It is to be hoped that this book will be used in this way in universities and colleges that have programmes in Islamic Studies and/or Religious Studies.