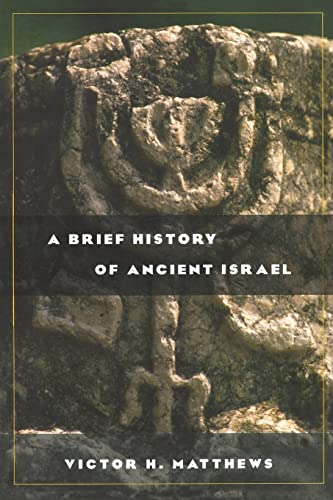 A BRIEF HISTORY OF ANCIENT ISRAEL

This little book is written to introduce students to the history of Israel from about 1800 to 332 bc. The writer begins with a brief acknowledgement of the recent ‘minimalist’ controversy, but prefers to adopt a more positive approach to the biblical text than has characterised some of these recent discussions. Broadly speaking the author is on the more conservative end of present-day writers of the history of Israel. After all, he uses the biblical division into periods: patriarchs, Exodus, monarchy, etc., as an outline for his history. However, he differs from the biblical narrative on a number of points. On the patriarchs he says:

it is not possible to say with confidence that Abraham, Isaac, Jacob, and Joseph, as well as their wives and children, were real persons. They are shadowy figures as far as historians are concerned and may be composites of several persons or tribal leaders (4).

On the Exodus and conquest:

Nuggets of historical information may well be embedded in the biblical text, but sifting it out is very difficult and, quite frankly, disappointing for all serious students of the Bible (17).

The author surveys the various historical periods using tables, maps and some particularly well-chosen quotations from ancient literature. Although space does not permit much detail, the author is prepared to pause to consider in greater depth something significant such as the Merneptah Stele (28–30).

It is stated right at the outset that this book is not meant as a stand-alone textbook, but to be used alongside other textbooks. This is important because other textbooks will counterbalance the occasional cases where the author is dogmatic on a disputed point, e.g. that Samaria fell in 720 bc, and that Sennacherib besieged Jerusalem twice.

Moreover, since this is an introductory textbook some errors could mislead students, e.g. that Hezekiah reigned 626–597/596 bc (75; a century too late), or that Cyrus began campaigning in 450 and marched on Babylon in 439 (112, again, a century too late). The spellings ‘Pharoah’ (33, 134) and ‘Habbakuk’ (130) appear alongside the misspellings of some less common names.

The chief plus of this book is that it is genuinely brief. The main text finishes after just 127 pages, and is followed by a brief table of dates and a glossary. When five maps and some blank spaces are taken into account the actual printed text is considerably shorter. In days when few students can be expected to read a three or four hundred page history of Israel—and ‘Histories of Israel’ do not tend to be alternative. If it were to go to a second edition and some of the glitches were reparied it could carve out a significant niche for itself among pedagogical material.