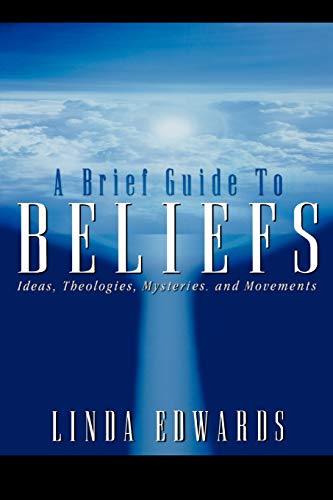 A BRIEF GUIDE TO BELIEFS

Having tackled the history of Western philosophy in A Brief Guide to Ideas (1999), Linda Edwards now proposes to guide the reader through ‘ideas, theologies, mysteries, and movements’ (subtitle). Given the size of the book one may question the word ‘brief’ in the title but, in fact, there are many discrete sections and each one is fairly short. She presents the book as both a reference work and a guide, aimed at tertiary/seminary level students. Writing as a Christian she seeks to be empathetic while not necessarily sympathetic to the worldviews she describes. Her task is indeed to describe rather than evaluate.

Chapters 1–5 present key r. philosophical ideas and includes a tour of the main issues in philosophy of religion, in ethics, in science and religion and in theodicy. Chapter 6 offers a conceptual framework for studying religions which is basically Phenomenological. Chapter 7 looks at twelve world faiths, from Buddhism to Baha’i, and chapter 8 turns to such alternative religious movements as Transcendental Meditation and Rastafarianism. Ideally Linda would wish to present a history of each faith but with the limitations of space she prefers, in chapter 9, to describe the historical trajectory of her own religion. This leads her to a treatment of alternative Christian movements such as the Mormons and the Family (formally Children of God) in the next chapter. Chapter 11 turns to pagan and occult thought, covering such movements as Theosophy and New Age religion. The final chapter examines secular thought and the human potential movement. The book concludes with a useful appendix providing copious statistics, a glossary of terms and a helpful bibliography.

Every author engaged in surveys has a difficult task juggling width and depth and Linda had to make some hard decisions, for example excluding Subud and Echankar, and generally refraining from evaluation. The reader must look elsewhere for such but undoubtedly this volume offers a useful and largely accurate compendium of global worldviews. The author writes from a mainstream Christian perspective and there is little to trouble the evangelical mind except, perhaps, her somewhat obscure and pluralist sounding reference to ‘the prayer of Christ that is continuously poured forth … in the depth of each human being’ (111). This is actually difficult to square with her strange description of mysticism as focused on ‘the natural state of consciousness’ (122) without reference to the reliance on the grace of God and the gift of his presence that Christian mystics so often stressed.

Some other criticisms. Linda’s bullet point summaries are often useful but sometimes misleading. She states, for example, that according to postmodernism ‘writers are unaware of the true meaning of their words’ (12) but according to this school words have no true and final meaning. The bullet points can be so cryptic as to convey virtually nothing, for instance we are told that Raelians believe ‘in the concept of Infinity’ (468). Her story of the Christian Church is very Westocentric. There is the occasional non sequitur e.g. explaining Hinduism: ‘What we think of as reality is really all illusion, because one day everything will pass away’ (138). She is less confident in some areas, for example I am not convinced that she really understands Einstein’s theories (51–52). Her allocation of space is sometimes surprising. She gives about as many pages to explaining the obscure and tiny group of Raelians as she does to the New Age movement. Her exegesis is questionable when she perceives 1 John 4:1 as an attack on the occult rather than simply false teachings. These however, are quibbles. Overall the volume is robust and trustworthy and a helpful compendium of diverse and interesting material.