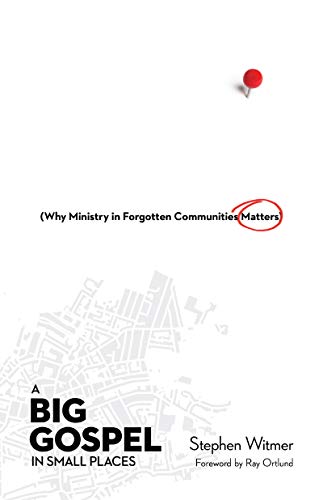 A Big Gospel in Small Places: Why Ministry in Forgotten Communities Matters

To begin on a personal note, I live and minister in a place of about 1,000 people in northern NSW, Australia. In sharing this fact with a bishop of another diocese, his laughter indicated amusement. My father is also an Anglican minister. His desire to move from a place of 8,000 people to a church in a place of 2,000 people was met with bewilderment from his bishop: “it’s not good for your CV,” was the implication. Witmer has provided a valuable corrective to this way of thinking. His is a rallying cry, not to prioritize small place ministry, but to value it alongside the push for city ministry.

In his first section, Witmer helpfully shows us how small places are both better and worse than we often think. In clarifying terms, he’s talking of places that are “small in population, influence, and economic power” (p. 22). With the rapid movement of people towards the cities, small places are often marginalized and overlooked (p. 29). Witmer says they can either be despised or idealized (p. 42), and only time spent with people in small places can give you a true picture of the good and the bad.

The heart of Witmer’s book is his second section where he develops a theological vision for small place ministry. He argues that we need to know the source and goal of small place ministry to value it and to minister faithfully and fruitfully. He summarizes these as “a shaping gospel and a see-through church” (p. 61). Witmer articulates the gospel as “the good news of the salvation God has accomplished through the incarnation, death, and resurrection of Jesus Christ” (p. 66). This gospel is big in four ways: in its importance, power, effects, and centrality (p. 67). Drawing on Ephesians 3, Witmer contends that God’s purpose for the church is that it displays his wisdom and glory (pp. 70–71). Therefore, Witmer raises the question: “Wouldn’t we expect God to show forth various aspects of his character with particular clarity through churches wealthy and poor, big and small, in big places and small places, of various cultures and ethnicities and classes?” (p. 73). Witmer believes that there are some aspects of the wisdom and glory of God that a large church cannot display, just as there are some aspects that a small church cannot display. Witmer then has an insightful chapter titled, “Strategic Isn’t Always What We Think” (ch. 5), looking at the lavish nature of the gospel and Jesus’s ministry in the Gospels. He then propounds that “Small Is Usually Better Than We Think” (ch. 6) and that “Slow Is Often Wiser Than We Think” (ch. 7). When one begins to think that Witmer is swinging the pendulum too far, he counters by saying things like “the gospel’s valuing of small doesn’t mean small is always good” (p. 92) and “the high velocity of the gospel shows that fast isn’t necessarily bad” (p. 106). And he always comes back to the grounding question of whether our preferment for big or fast is shaped more by the gospel or by our culture. Witmer then concludes this section by showing what small place churches should look like and helps the small place pastor to battle joy-killers.

In the book’s final section, Witmer employs some piercing questions to help identify both good and bad reasons to minister in small places and helps us to reconsider some of the common reasons for prioritizing city ministry. To those ministering in small places he says, “My prayer is that … you won’t stay where you are simply because it’s easier, safer and more convenient to do so.… I pray also that you won’t leave your current ministry because you hear the siren song of making a name for yourself in a famous, important place” (p. 144, emphasis original). Witmer raises some bad reasons not to serve in small places. One of these bad reasons is particularly salient and strikes at our prideful hearts: “I’m too gifted/educated for a small place” (p. 149). Witmer challenges this, saying, “Do we doubt that God in his sovereign wisdom can give a big talent a small platform? … Those who walk closely with God and are deeply engaged in small place ministry soon realize they’re not overqualified to stand before God’s people and declare the mysteries of the gospel” (p. 149). Witmer provides good reasons for considering small place ministry, though I find one reason a little too subjective. Witmer writes, “If your heart beats faster when you think of small places—or perhaps one small place in particular that you’ve grown to love—that may be a good reason to follow your heart and love deeply what God loves perfectly” (p. 157). Given what Witmer says in the rest of the book, I suspect he would see this love as God-given, rather than succumbing to our own comforts. However, this was not clarified sufficiently on this occasion.

Witmer seeks to push back against the common reasons to pursue city ministry, helping to refine them so that they are truly grounded in the gospel. The apostle Paul’s ministry in large centers has often been put forward as a reason to prioritize cities. But, asks Witmer, “Didn’t Jesus and his disciples spend lots of time in villages and the countryside?” (p. 166). Witmer raises the question of the appropriateness of citing Paul’s ministry pattern as a template for our own: “Paul never commanded anyone to focus on cities, nor did he explain why he himself was drawn to cities” (p. 172). Witmer also challenges the idea that reaching the city is strategic for reaching the countryside. He says, “Getting the gospel from the city to the small towns requires sending people from the city to the countryside, which is generally the opposite of what the urban apologetic literature calls for” (p. 176). Another reason given for pursuing urban ministry is eschatological—i.e., “The end-time destiny of the people of God is life in a city” (p. 177). However, Witmer persuasively pushes back against this solely urban understanding of the apostle John’s revelation.

The great value of Witmer’s book lies in his insistence that our questions of where and how ministry should happen are driven not by the culture but by the gospel. As Witmer calls for a valuing of small place ministry, it would be an unfounded criticism to say that he is calling for us to neglect city ministry and to focus solely on small place ministry. His argument is that both are needed to display the glory and wisdom of God in all its fullness.

Whether you are a small place pastor, a pastor of a large city church, or a seminary student considering where God is calling you to serve, your love for the gospel and your desire to serve God wherever he has placed you or wherever he sends you, will only increase as you read this book. I highly commend it!