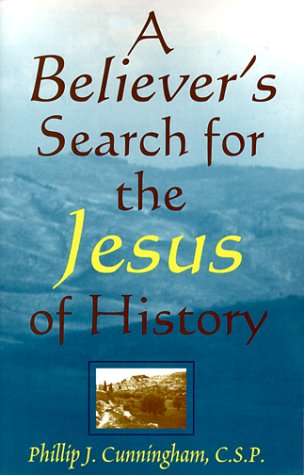 A Believer’s Search for the Jesus of History

This book is a clearly written attempt to present the latest in (predominantly Roman Catholic) historical Jesus scholarship. It draws very heavily on the work of J.P. Meier and R.E. Brown, and to a lesser extent, E.P. Sanders. Geza Vermes and Luke T. Johnson, seeking to popularise their conclusions for an educated lay audience. The book is in the format of a biography, and seeks, as the title implies, to present a historical account of the life and ministry of Jesus and at the same time to set it in a confessional context.

His justification for attempting the historical task is twofold. The first is ‘to give our faith a firmer anchor in reality’, while remembering that the historical Jesus (understood by Cunningham as the reconstructed Jesus behind the Gospels) is not the object of our faith: the historical Jesus can only ever be ‘fragments of a mosaic, the faint outline of a faded fresco’ of the real Jesus. This phrase of J.P. Meier is repeated throughout the work. The second purpose is to remind us that Jesus was fully human, and so knows our temptations and weaknesses: thus the historical task ‘keeps us mindful of the “real” Jesus, the “real” person who lies behind “the good news of Jesus Christ, the Son of God” ’. The book contains chapters on the sources, the Galilean setting of Jesus’ ministry, as well as the wider Jewish context. There is a wealth of interesting material on the Jewish background which will benefit the lay person in seeing Jesus in his historical context. The background to the Passover meal is especially useful, though the focus on Jesus as a Hasid (after Vermes) is slightly overplayed, as is the rather romanticised portrait of the rural, village setting of Jesus’ origins. Similarly, there is a misleadingly vague description of Jesus as a charismatic, who had an ‘informal familiarity with God’, and therefore a ‘liberal’ and ‘cavalier’ approach to the Law. The chapters on Christology, the Kingdom and the opposition to Jesus are then followed by accounts of the trial, the death and (an afterword on) the resurrection, which, following Sanders. Cunningham takes to lie outside the boundaries of inquiry into the strictly historical Jesus.

The material is clearly presented, though there is little argumentation because of the introductory nature of the book. But the chief problems with the work are very serious ones. The very limited confines of the scholarly discussions mentioned—the conclusions of Meier and Brown are almost invariably followed—mean that large tracts of scholarly discussion are ignored. In the discussion of Christology, there is no acknowledgement that there might be alternatives to the views presented in this book: there is no mention of the early high Christology that has been so prominent in much recent discussion (M. Hengel, L. Hurtado, B. Witherington, R. Bauckham). And the possibility that Jesus could have been acknowledged as divine in his lifetime (N.T. Wright, C. Fletcher-Louis) is ruled out of court. This is particularly confusing in the context of Cunningham’s discussion, as he deems it impossible that any monotheistic Jew could have conceived of a divine Jesus, yet later all the Gospel writers knew of Jesus’ divinity.

A second issue is a methodological problem which runs throughout the work. There is consistent application of the distinction between ‘remembered history’ (i.e. ideas which originated from the testimony of the first disciples) and ‘historicised prophecy’ (ideas constructed out of OT passages which came to be pinned onto Jesus later). No criteria are set out by which one should distinguish between the two, apart from the presence of OT ideas. This is very surprising: why should Jesus’ actions and sayings, such as the last words from the cross, not be shaped by his understanding of his destiny from the OT? How could the disciples not view Jesus through the lens of the OT, in categories such as ‘Messiah’? And why should God (as in the darkness which accompanied Jesus’ death) not act consistently with the way he acts in the OT? Would that not enable his activity to be more comprehensible? In each of these areas, Cunningham opts for the path of scepticism pioneered by D.F. Strauss in the nineteenth century, rather than seeing the OT as preparatory for, and a formative influence on, the thoughts of Jesus.

This raises the larger issue of how historical study is done by believers, a central issue flagged up in the book title and in the text. The incongruity of this book is that there is a very laudable attempt to integrate history and faith: the two justifications for the historical task above are very sensible. But the history done in this book is offered entirely according to enlightenment canons of rationality: there is no attempt to construct a ‘believer’s history’. The real Jesus, Cunningham asserts throughout, is much more than the historically reconstructed Jesus; and yet a significant proportion of the Gospel accounts are eaten away by the acids of criticism. This is particularly disappointing after Cunningham’s initially promising appropriation of Meier’s point that if a historian has no reasonable explanation for an event, to affirm that God has or has not brought it about is beyond the historian’s field.

For the beginner who is looking for an introduction to the conclusions of current Roman Catholic scholarship, this would be a very good starting point, considerably less intimidating than the big multi-volume works of Meier and Brown. But the book needs to be read with a critical eye.