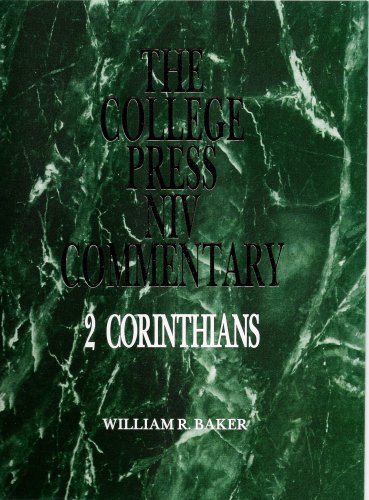 College Press is the unhelpful name of a publishing arm of the Independent Christian Churches/Churches of Christ movement. Historically, it has not focused on producing scholarly volumes, but this emerging commentary series is part of a move to change that situation. William Baker (PhD Aberdeen), Professor of New Testament in the St Louis Christian College, Missouri, has produced what is probably the best volume in the series thus far.

The introduction covers the expected topics. With several recent evangelical commentaries, Baker argues for the unity of the letter and distances Paul’s opponents from the bona fide early Christian apostles. He suspects the offending party with whom the Corinthians have finally dealt properly (2 Cor. 2 and 7) is not the incestuous man of 1 Corinthians 5.

The commentary proper prints the entire English text of the NIV in consecutive, discrete phrases or clauses, with the relevant comments following each segment. The majority of the commentary is lexical; Baker is fully abreast of the meanings of key words and phrases and describes how they fit into their context. Greek words are printed in the text but always with transliteration and translation. Footnotes carry on running interaction with numerous major, recent commentaries on the epistle and a representative selection of other important secondary literature.

Baker determines that the body of the letter begins with 1:12. What some have termed a major digression in 2:14–7:4 is actually an integral part of the letter, defending Paul’s apostolic ministry in principle. Thriambeuo in 2:14, paradoxically, should be understood as a metaphor of the victory parade of an army displaying its captives. With S. Hafemann, the difficult expressions in 3:7 and 13 should be taken as describing the fading glory blocked by Moses’ veil, which symbolised the inherent limitations of the Law from the onset of the Sinaitic covenant. With M.J. Harris and F.F. Bruce, 5:1–10 offers a resurrection body to believers immediately upon death; no intermediate state of disembodiment is countenanced. The judgement seat of verse 10 is not for determining who is saved but for assessing the qualities of believers’ lives ‘within their salvation status’ (218).

The emphasis on reconciliation in 5:11–21 is to be distinguished from Paul’s treatment of justification, redemption or propitiation in that it is the one dimension of salvation that stresses our horizontal responsibility to our fellow humanity and not just our vertical relationship with God. There is no contextual or lexical support for applying 6:14 primarily to marriage issues; it is a broad injunction calling on believers to separate themselves from all manner of idolatrous, pagan relationships. Chapters 8–9 are supremely important, given the amount of energy Paul devoted over the years to this collection; abiding principles for believers focus not so much on a tithe as on generous and sacrificial giving. ‘Equality’ in 8:13–15 should better be translated ‘equity’, because of the inherent variations of gathering and consuming that remained even in the Israelites’ wilderness manna economy.

Hints throughout the letter suggest that Paul’s abrupt change of tone in chapters 10–13 is not unplanned. Boasting in his weakness forms the countercultural heart of Paul’s rhetorically sophisticated but not Sophistic defence in this final section. We must be wary of too quickly imitating Paul’s vitriolic rhetoric in our world because we do not share Paul’s unique apostolic relationship with God. The thorn in the flesh (12:7) is increasingly being identified with some hostile personal relationship but is still best viewed as a physical disease or weakness.

As with all commentaries, there are issues reviewers could dispute. For example, I remain unconverted to the ‘revisionist’ interpretation of 5:1–10, and Baker does not improve on previous attempts to avoid the impression that Paul simply changes his mind or contradicts himself. The biggest problem with the book, however, is not its exegesis but the lack of adequate proof-reading. Scattered typographical errors appear throughout the text and footnotes (Murphy-O’Connor is mistakenly spelled ‘O’ Conner’ literally dozens of times), but it is the bibliography that is in extraordinarily poor shape. I found 91 mistakes in 19 pages (checking approximately three-quarters of the entries), and almost every foreign language reference contains at least one mistake. I can only assume that no one competent ever edited this part of the book. The value of the commentary proper, though, should ensure a quick reprinting, so hopefully these items will be corrected.