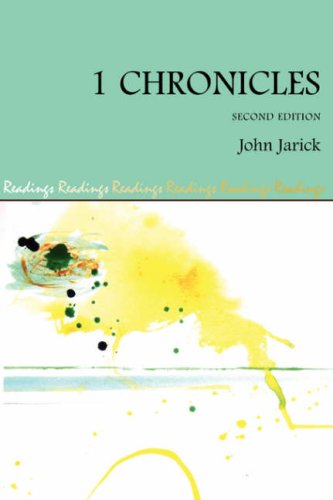 John Jarick’s recent commentary on 1 Chronicles (or the first book of the Annals as he calls it, p. 2) is a fine example of what some people insist on labelling ‘post-modern’ scholarship. Jarick takes as his basic premise the assertion that ‘the Annalists created what to their minds should have stood unrivalled among the Judean community as the definitive account of the nation’s monarchical era’ (2–3). Although this idea is repeated, no argument is made for it and it is hardly compelling. The result is that ‘we can set aside the scrolls of Samuel and Kings, and contemplate Chronicles without their interference’ (3).

Jarick holds that though ‘there may be some historical groundedness to parts of the tale’, the book of Chronicles has the basic character of ‘fantasy literature’ (6). This suspicion of the historical value of Chronicles is by no means new, but Jarick seems to extend his view to much of the rest of the OT. The writers are ‘storytellers’ who create a ‘story-world’, Genesis is ‘imaginary’ (13, 25) and the book of Ruth is a legend (114). Though it is easy to get impatient with the extreme historical minimalism that goes far beyond anything that Wellhausen ever dreamt of, the issue, especially regarding Chronicles, is not as straightforward as we might like. For example, was the height of the Temple 120 cubits (2 Chr. 3:4) or 30 cubits (1 Kgs. 6:2) and how does this fit in with the rest of the Chronicler’s portrayal of the Temple? Jarick will not help you think through the issues, but The Art of Biblical History by V. Philips Long might.

Jarick admits that his view that the Chronicler’s purpose in writing was ‘to claim for itself the distinction of being the authoritative account of the how things were and how they should be’ (6) is merely an act of imagination on his part (3), but the question of the purpose and theology of the book is an important one. The work of Sara Japhet and Hugh Williamson (each has written a commentary, a monograph and articles on Chronicles) is much more helpful in this respect.

The final issue raised by Jarick’s commentary is the relationship of Chronicles to the canon and the Christian faith. Although there is plenty of citation of other parts of the Bible (especially in the helpful section on the genealogies of chs 1–9), there is a desire not to relate the book to the other accounts of the same period (3). This complete silence concerning Samuel-Kings does not illuminate Chronicles (for example the absence of the story of David and Bathsheba helps us to understand the Chronicler’s portrayal of David). Further, Jarick does not appear to like the god of the Annalists, who he sees as rather whimsical and bloodthirsty (see the section on 1 Chr. 21 on pp. 125–39). This is a god for whom ‘it seems that peace and quiet are required before [he] can put his feet up in his house’, (143). That the book of Chronicles might have anything to say about Jesus or that the ‘god of the Annalists’ might have anything to do with the God of the Christians is not even considered.

This commentary is likely to leave the reader knowing more about Chronicles, and it raises several important and uncomfortable issues for evangelicals, which we would do well not to ignore. However, it provides no answers, and no discussion, and, no doubt, did not intend to.