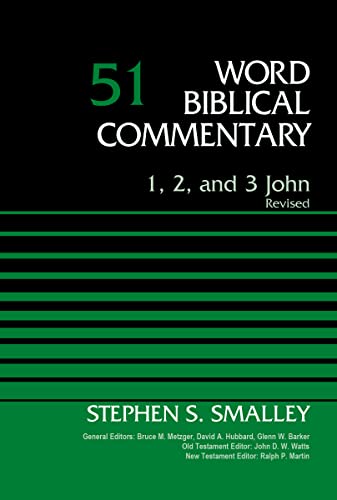 The publication of R. E. Brown’s Anchor Bible commentary on 1–3 John—all 840 pages of it—might be thought to put an end to all further scholarly commenting on the epistles for some time to come. Students, however, will welcome this new contribution by a conservative scholar, partly because it says everything essential in (exactly) half the length of Brown and partly because of its excellent and reliable scholarship. Dr Smalley argues that the letters are to be seen as reflecting the development of (a) a strongly Jewish group which questioned the full divinity of Jesus, and (b) a Hellenistic group which questioned his full humanity. The letters are written to deal with these tendencies in the ‘Johannine community’ and to reassert the true Christian teaching enshrined in the gospel. The format of the Word commentaries provides for: 1. full sectional bibliographies, which display the author’s familiarity with Johannine scholarship; 2. a fresh translation; 3. textual notes, which are helpful in showing why certain readings are preferred to others; 4. a discussion of ‘Form/Structure/Setting’ which places the section in its context and summarizes the flow of thought; 5. ‘Comment’, which gives a detailed discussion of the Greek text; and 6. ‘Explanation’, which draws the exegesis together in a brief summary. Dr Smalley’s treatment is lucid, thorough and judicious, and tackles the exegetical problems in an exemplary fashion, setting out the various options fairly and presenting reasoned solutions. The one weakness of the volume, which it shares with others in the series, is that, although the ‘Explanation’ is apparently meant to indicate the passage’s ‘relevance to the ongoing biblical revelation’, scarcely anything is done to indicate what the message of the passage is as part of Scripture which has something to say to the contemporary reader. To be sure, the exegesis will help the reader to understand the original meaning of the text and will provide him with an excellent basis for moving on to contemporary application, but he will have to take that further step for himself. It is a pity that an evangelical series of commentaries has not grasped the opportunity to discuss the problems of exposition more fully. With this one reservation this volume can be most highly commended as now being the standard work for students on the Greek text of the letters.

Dr Lieu’s book has developed out of her Birmingham doctoral dissertation and is probably the only thesis of note that has ever appeared devoted primarily to the problems of 2 and 3 John. It is a work for the Johannine specialist rather than the general reader. There are five sections. First, there is a thorough study of the canonization of these two brief letters which confirms that the three Johannine epistles had independent histories as regards their translation and canonization. Second, it is argued that while 3 John is a genuine letter, 2 John has a more artificial, self-conscious character. Third, there is a detailed exegesis of the two letters, which shows that 2 John is more than ‘a pale version’ of 1 John, although it is based upon it and is even described as ‘parasitical’ upon it. 2 John is seen as being written for the Johannine communities as a whole rather than to a specific situation in one church. 3 John is held to be from a different author. Fourth, Dr Lieu discusses the ecclesiastical situation with its problems of authority in the church. She finds a tension between the original witness tradition and the living experience of the community. There is a firm rejection of non-Johannine forms of Christianity. The quarrel with Diotrephes in 3 John may be what led to the erection of rigid barriers against non-Johannine Christians in 2 John. Finally, the implications for the understanding of the Johannine tradition are examined. There is a lack of openness to the continuing witness of the Spirit in 1 John as contrasted with the Gospel, a negative attitude to the world (no mention of mission!), and a sense that the world lies beyond redemption; this is related to a theology which tends to centre on the community rather than on Jesus. There are fundamental differences of thought between the Gospel and the Epistles. Simplistic solutions to the problem of the relation of the Epistles to the Gospel are ruled out.

All this is presented in a somewhat allusive and almost hesitant tone by Dr Lieu, which makes it difficult to state her thesis with precision; clearer signposts and summaries of her main points would have been helpful. As it is, the thesis is difficult to grapple with. It contains a wealth of useful observations and insights that must be taken into account in assessing the situation behind the Johannine letters. But it tends to push impressions and possibilities too far, and finds sharper differences between the Johannine documents than seems probable to me. It is interesting that Dr Smalley, who is familiar with her work, and indeed commends it, is firmly of the opinion that both the Johannine Gospel and the Epistles are ‘mainstream’ and not sectarian in their Christianity and finds a close unity between them, although he leaves the question of common authorship rather open.