Let’s begin by giving Rob Bell his props. The Zimzum of Love: A New Way of Understanding Marriage (co-written with his wife, Kristen) is an innovative work. It’s hard to build a book around the word zimzum and not be tagged as racing down the road less traveled. Zimzum, by the way, is a Hebrew word unearthed by the Bells from some arcane rabbinic literature. “God had to contract or withdraw from a certain space so that something else, something other than God, could exist and thrive in that space,” they explain. “And the word a rabbi from the 16th century used for this divine contraction is zimzum” (18). They do not explain why God’s omnipresence is displaced by the things he created.

In marriage, zimzum is the space you create for your spouse to thrive. It releases energy “generating the flow that is the lifeblood of marriage” (19). If you want a strong marriage, you work to strengthen your zimzum and increase the energy flow between you and your spouse. Those with failing marriages have neglected their zimzum. Zimzum is innovative . . . in a somewhat mystical Jedi, “Use the force, Luke” kind of way.

As for style, the writing is simple, clear, and accessible—no small feat when dealing with the complexities of zimzum. The Bells prove adept at charting the space between couples as “responsive, dynamic, exclusive, and sacred”—ideas that shape the themes for chapters two to five. They write in a way that says, “We get you; we’ve been there!”—which helps explain the popular appeal of Rob’s writing. The Rob and Kristen, “he said, she said” dialogue stretching throughout the book is not merely a catchy literary device but a playful look at what appears to be a strong and commendable marriage. Useful handles such as “act in love, not fear” and “don’t let others into your exclusive space” ring with relevance, though sourced in zimzum rather than in Scripture.

If Love Wins raised the question “Is Rob Bell a universalist?” this work presses an even more troubling inquiry: “Has Rob Bell lost his Bible?” It’s a critical question for someone advertised on the dustcover as “one of the most influential Christian leaders in the country.” To measure him accurately against that endorsement, though, the reader must consider two related problems.

The book’s first sentence is, “We want to give you a new way of understanding marriage.” Quite a bold proposition: a new way of understanding marriage! The Bells have happened upon—and thoroughly embraced—a deep, transformational truth from a Jewish rabbi (who presumably rejects Jesus, the New Testament, and the mystery of marriage as revealed in Ephesians 5) that unlocks “the deeper mysteries of marriage” (viii). I lost count of the number of times the Bells used words like complex, mysterious, deep, and profound. The results are ideas so enigmatic, so shrouded in subjectivity, that meaning is obscured or, worse, entirely lost. 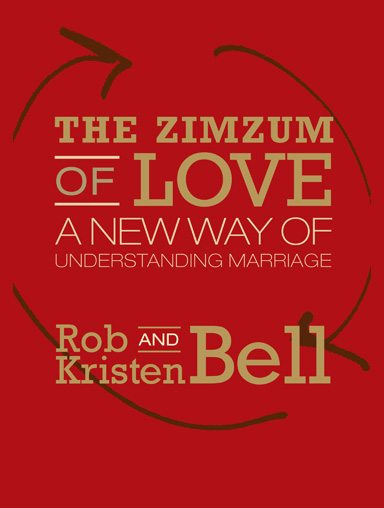 The Zimzum of Love: A New Way of Understanding Marriage

The Zimzum of Love: A New Way of Understanding Marriage

We really need to step back and consider what’s happened. A former pastor who gained notoriety by teaching the Bible has developed an entire marriage philosophy from an obscure word used by a Jewish rabbi. The results are not new insights but an old problem ascribed to the people of Athens: “Now all the Athenians and the foreigners who lived there would spend their time in nothing except telling or hearing something new” (Acts 17:21).

Each time pastors sip the postmodern mojito of novelty, they discover something new and amazing. But this is the burden of novelty, isn’t it? Untethered from history or orthodoxy, the postmodern pastor has to (1) ignore or deconstruct traditional beliefs, (2) humbly introduce a narrative from his surprising and fresh personal journey, and then (3) become the shepherd-guru for the lost souls he created through step one. Rob Bell seems to plod the path with unwitting precision.

In Love Wins Bell introduced us to his “new” way of understanding heaven and hell. At least he used the Bible. In The Zimzum of Love, the Bells reference the Bible a total of three times, one of them being a reference to John 3:16 signs at football games (25). But then, why ground ideas in the Bible when zimzum offers so much uncharted territory for authorial exploration? And this is where Rob and Kristen blast off from planet Christianity for galaxies unknown.

The result? A “spiritual” book that commends the ethics of Christianity but appears ashamed of their source (Luke 9:26). Biblical ideas without scriptural grounding—water with no spring, heat with no sun, liberty with no law (James 1:25). Never mind “rightly handling the word of truth” (2 Tim. 2:15); Bell makes little effort to handle it at all.

I’m not exaggerating. If Christianity were outlawed and a mob amassed to burn Christian books, The Zimzum of Love would not be at risk.

So what should we make of this book generally and the trajectory of Rob Bell’s ministry specifically? Are we just shortsighted, unable to see how this book is really a super-missional missive written from the frontlines to dislodge comfy Christians entrenched in the church? I don’t think so. There’s no bad news in zimzum, so no gospel is needed. This notable absence illustrates the plight of the postmodern, post-Christian pastor. When the Bible is pitched overboard, the gospel is capsized too. In this book the Bells have set the Bible bar so low that almost any religion could clear it and any spiritual leader applaud it. I’m certain many will.

But reading this work brings to mind another kind of pastor. Let us give genuine thanks to God for the guys who eschew novelty and embrace authority. Who have the guts to stare at the complications of marriage without breaking sight of Scripture. Men who go to the source—Genesis, the Psalms, the Gospels, Ephesians 5, 1 Peter 3—to not only diagnose the problems but also to propose gospel solutions.

I pray Rob Bell joins that tribe. Absent that, his next book will be total zimzum—a space where his words exist without God.