John Walton is a professor of Old Testament at Wheaton College. His research focuses primarily on interpreting the Old Testament in light of the cultural context of the ancient Near East (ANE). As such, he’s uniquely qualified to help us understand the Genesis 1–3 creation narratives in a new light.

The Lost World of Adam and Eve: Genesis 2–3 and the Human Origins Debate is a follow-up to his earlier volume The Lost World of Genesis One (IVP Academic, 2009). A common thesis in both is that Genesis 1–3 is a “lost world” because we’ve lost touch with the “cognitive environment” in which it was originally written. The ANE mindset wasn’t interested in questions on scientific of material origins, as we moderns have. Rather, ancient people thought in terms of functional origins. The various ANE creation accounts (Gen. 1–3 is just one) were only concerned with the ordering of the cosmos and the assigning of functions and roles. Walton argues that if we set aside our modern scientific questions and get inside the text, understood as an act of communication within its ancient cognitive environment, we’ll see Genesis 1–3 doesn’t include any affirmative teaching that requires Bible-believing Christians to deny an old earth (his previous work, The Lost World of Genesis One) or to reject the notion that we descend from pre-human ancestors (his present work).

A Cluster of Assumptions

There’s a cluster of assumptions about Adam and Eve traditionally derived from Genesis 2–3 and other biblical passages. But Walton thinks they aren’t actually part of the text’s claim. These assumptions include:

Walton’s argument against the first point is that the formation accounts don’t need to be interpreted literally since they’re archetypal—that is, applicable to all humans. Against the second point, he argues the creation of “man” in Genesis 1:26 is generic and refers to the whole human race, whereas the formation of Adam and Eve in the following chapter refers to a much later event (the selection of a human couple from the human race to be priests in God’s holy temple). The implication is that unknown generations of humans lived and died prior to Adam and Eve. Walton’s argument against the third point is that the Bible simply does not make the claim that Adam and Eve are the biological ancestors of all other humans. A few verses have traditionally been though to teach this, but they don’t have to be interpreted in the traditional manner (e.g., the “one man” of Acts 17:26 could be referring to Noah).

If these three traditional points aren’t actually biblical claims, then Bible-believing Christians don’t need to reject common ancestry. Examining scientific evidence will have to determine if common ancestry is true.

Walton should be applauded for his responsible handling of ANE materials and his desire to understand the “cognitive environment” of Genesis, contra those who simply take the Genesis account as nothing more than another non-historical myth. It’s true that many fascinating similarities between Genesis and the ANE texts exist. They have similar language and images. It’s as if the biblical authors were entering into a widespread ancient conversation. Yet, as Walton is careful to show, the biblical authors often depart from and even critique the polytheistic beliefs of their Mesopotamian neighbors at key theological points (e.g., the Great Symbiosis—the idea that the job of humans is to provide sacrifices for the gods so that the gods will provide the material needs of humans). Walton uses the ANE parallels not to pull the Genesis account down to the same level of the ANE myths, but to give insight into the way ancient authors used the symbolic language of origins.

Walton’s insistence that Genesis 1–3 is not primarily a revelation of scientific information is also helpful. Since the text was an act of divine communication to an ancient audience, it couldn’t have been speaking of scientific matters that people only centuries later would understand. As Walton says, “The text cannot mean what it never meant” (19). This is an important principle that should guide our interpretation. 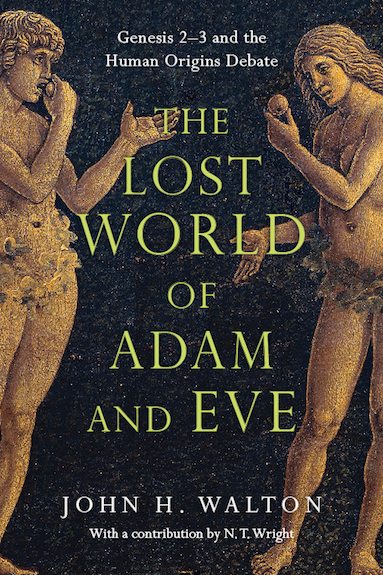 The Lost World of Adam and Eve: Genesis 2–3 and the Human Origins Debate

The Lost World of Adam and Eve: Genesis 2–3 and the Human Origins Debate

Caution is in order, though, lest we take this principle so far that we evacuate the Bible of any teaching addressing scientific matters or material origins. For example, contra Walton, I continue to think Genesis 1:1 majestically affirms the initial ex nihilo creation event. If so, then it has at least something to say about the material origins of the universe.

Walton repeatedly emphasizes that the authority and inerrancy of Scripture are attached to what the text affirms or claims. This means God may have included incidental culturally-bound statements in the text as part of his accommodation to an ancient audience, but that aren’t part of the Bible’s affirmative teaching or claims. An example he appeals to is Scripture’s references to the viscera of the human body (heart, kidneys, intestines, etc.) as the seat of the mind and emotions. God is using ancient conceptions of human psychology and anatomy to communicate spiritual truths—not biological claims—in idioms ancient people would understand.

On the other hand, the principle of divine accommodation, while certainly valid, can be abused. I don’t think Walton abuses it, but it can be taken too far in less cautious hands. For example, Peter Enns thinks the historicity of an individual Adam belongs among the incidentals, while Walton rightly affirms the historicity of Adam. How do we use the principle of accommodation without capitulating elements that are actually substantive divine revelation? It would’ve been helpful if Walton had provided some principled reasons to prevent the disintegration of the Bible’s claim to be narrating real, historical events (even if we don’t need to take everything in a maximally literal way).

Walton recognizes that it’s possible to affirm a historical Adam in a way that allows for common ancestry—that is, without affirming the de novo creation of Adam and Eve. So why is Adam’s historicity theologically important? Because it’s connected to biblical theology on the origin of human sin, Walton rightly contends. At this point, though, the thread of his argument begins to fray. He argues not only for animal death, but also for human sin and human death before the fall. He bases this on his view that generations of humans lived and died before Adam and Eve, and on his idiosyncratic interpretation of “dust” in Genesis 2:7. Walton appeals to Genesis 3:19 to argue “dust” means “mortality.” Yet the concept of mortality comes from the entire phrase “to dust you shall return.” The entire phrase may refer to mortality, but the word “dust” alone doesn’t denote mortality. I fear Walton may be guilty of the “totality transfer” fallacy—unduly expanding the lexical meaning of a word to include all of the concepts present in the contexts where it’s used. This may seem a minor exegetical point, but it has significant implications for his overall thesis that Adam and Eve weren’t the first or the only humans, and that human sin and death occurred before they arrived.

Additionally, Walton has a peculiar understanding of Adam’s federal headship. Sometimes he employs more traditional formulations, such as affirming that sin entered the world through Adam’s sin. But as you continue to read, it becomes clear he thinks human sin already existed. For Walton, when Adam sinned, humans became accountable for their sin. Further, by causing all humanity to be barred from the tree of life, Adam caused humanity to be consigned to inevitable mortality. Before that, humans were mortal but not consigned to it inevitably. This is quite different from the traditional concept of the imputation of Adam’s sin to the human race that brought death as the penal consequence of sin. I wonder if this is a case of using traditional terms with non-traditional meanings.

The excursus by N. T. Wright on Paul’s use of Adam (170–80), which I had hoped would provide a crisp and clear exegesis of Romans 5:12–21 and 1 Corinthians 15:20–22, 45, raises even more questions. Wright argues that the Genesis account of Adam’s formation is really about Adam’s vocation. He thinks the traditional understanding of the importance of Adam in biblical theology is based on a “shrunken and distorted” doctrine of salvation (172). That shrunken view is that God demanded perfect obedience from Adam, but Adam broke the commandment. Jesus, then, came as the second Adam to yield the perfect obedience Adam failed to yield, thus making available a righteousness post-fall humans can receive in order to be accepted by God. Although you may have thought Paul in Romans 1–5 was teaching something approximating that rough outline, that’s not even close to what Paul was saying according to Wright. I’ll leave it to the reader to try to discern—if they can—what Wright thinks Adam meant to Paul.

In sum, The Lost World of Adam and Eve may not be completely convincing in all of its exegetical points, but it offers many fresh exegetical proposals that make familiar verses stand out with new meaning. Walton provides a valuable stimulus to an important contemporary discussion about human origins that conservative evangelicals need to have and many are already having.

Nevertheless, some important unresolved questions regarding Paul’s use of Adam need to be examined with greater care. The notion that sin and death occurred among the human population prior to the existence of Adam and Eve raises theological problems that impinge on broader areas of theology, particularly the doctrines of original sin and the imputation of Christ’s righteousness as the second Adam. In light of Scripture’s testimony, these theological problems cannot be ignored.

Charles Lee Irons (PhD, Fuller Theological Seminary) teaches New Testament at the California Graduate School of Theology in Garden Grove. He resides with his wife and three children in Los Angeles, California, and is a ruling elder of New Life Burbank (PCA). His writings and lectures on various theological topics, including issues relating to the Trinity, may be accessed at www.upper-register.com.