At this point in the debate over same-sex marriage, those who recognize the authority of Scripture are largely convinced that same-sex marriage (SSM) is immoral. On the other hand, proponents of SSM are convinced marriage is a social convention that can be redefined to match current theories of psychology and the nature of gender. In the middle a large number have likely tired of hearing arguments about the topic and do not believe either position will make much difference in the long run. In many cases, the emotional force behind arguments for the redefinition of marriage and attacks against those who publicly question the morality of SSM lead the otherwise unconvinced to take the path of least resistance and publicly affirm SSM despite any private concerns. Some on both sides of the debate have been convinced by arguments that are untrue, illogical, or both.

In Why Not Same-Sex Marriage: A Manual for Defending Marriage Against Radical Deconstruction, Daniel Heimbach attempts to break through the barriers to communication by carefully examining arguments for SSM and posing reasoned objections to them. His goal is to “convince the undecided of the social necessity of keeping the nature, meaning, and structure of civil marriage from being radically deconstructed” (xv). In other words, he is aiming both to instruct the “mushy middle” and to equip evangelical Christians facing a hostile culture.

Heimbach’s True Sexual Morality: Recovering Biblical Standards for a Culture in Crisis (Crossway, 2004) was a comprehensive look at the philosophical underpinnings of the sexual revolution, explaining how culture developed opinions on sexual morality and comparing those opinions to a biblical model of sexual morality. Why Not Same-Sex Marriage builds on the foundation of his earlier work and focuses on the particular issue of SSM, which is a logical outworking of the sexual revolution. 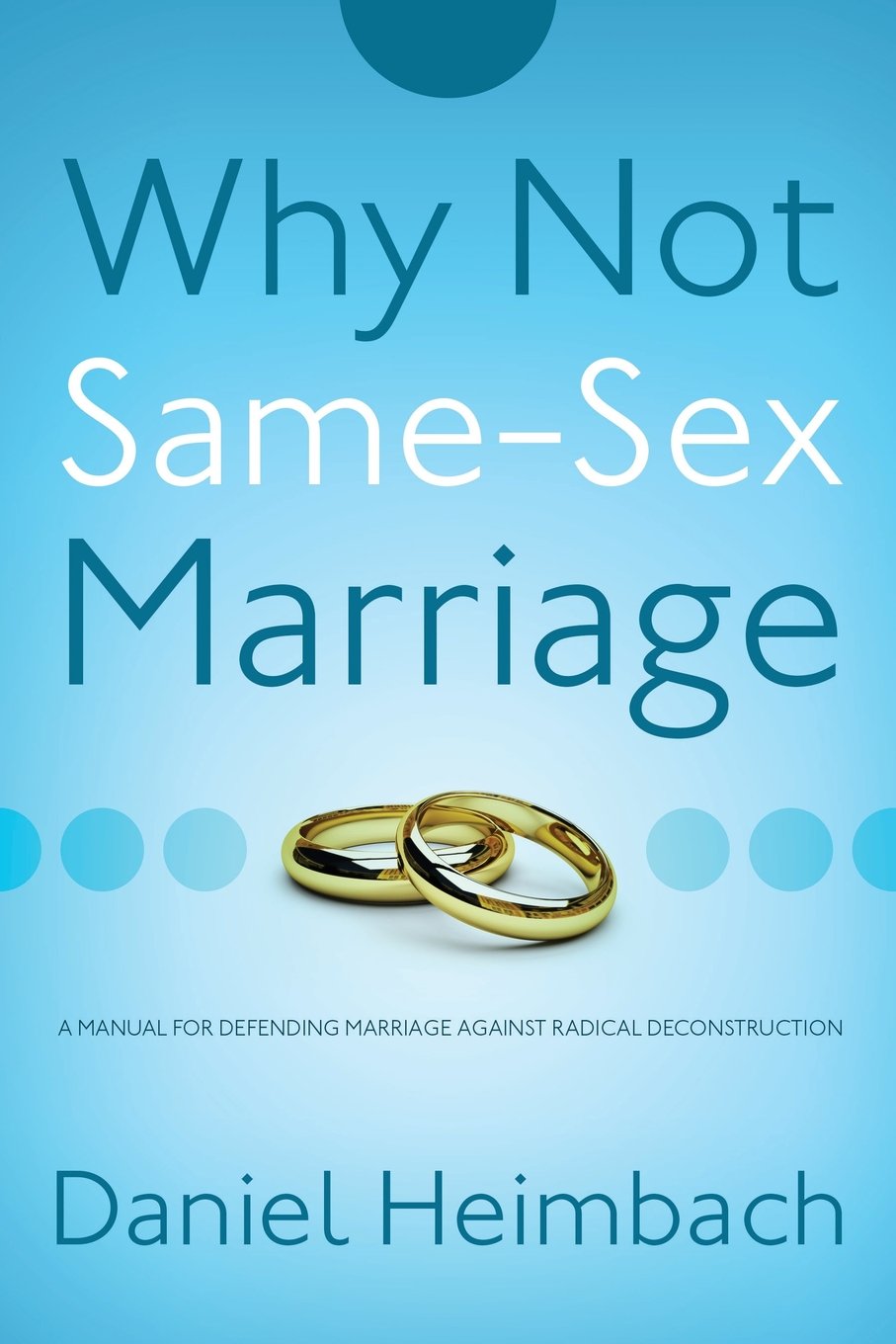 Why Not Same-Sex Marriage: A Manual for Defending Marriage Against Radical Deconstruction

Why Not Same-Sex Marriage: A Manual for Defending Marriage Against Radical Deconstruction

The bulk of the book consists of two or three page chapters, each summarizing arguments for SSM, providing a gracious but firm rebuttal, and offering bibliography of sources on both sides of the debate. Instead of building straw men, Heimbach, professor of Christian ethics at Southeastern Seminary in Wake Forest, North Carolina, presents opposing arguments fairly and answers them with careful reasoning in terms accessible to lay people. Each of the arguments and responses is indexed according to both the argument and refutation, making this a helpful resource. At the end of the book, Heimbach includes testimonies of formerly active gay people, two reprinted academic articles on normalizing SSM, and a list of resources for those seeking more information on the topic.

The 500-page book is a refreshing approach to the debate over normalizing SSM. Much (though certainly not all) of the debate thus far has focused on emotional appeals and personal attacks, often in the form of name-calling. It seems that significantly less energy has been directed toward careful evaluation of arguments from either side. Meaningful deliberation about such a significant change in cultural structures has often been thwarted by vitriol from both sides and retreat to largely unchallenged presuppositions.

For some Christians, the template for a healthy marriage that is evident in Scripture––one male husband wedded to one female wife for life––provides a sufficient foundation for rejecting SSM. However, arguing based on the content of Christian and Jewish Scriptures tends to have a limited appeal since most of the world’s population do not acknowledge the Bible as authoritative. Heimbach presents arguments that don’t depend on accepting the authority of Scripture in order to communicate beyond the ranks of those already convinced of the traditional definition of marriage. In other words, this book fulfills the important task of making the argument for marriage as necessary for the common good in terms acceptable beyond the Christian sphere.

Even among those who hold to a traditional definition marriage, some see SSM as a “live and let live” issue that has few negative consequences for society. Although Heimbach does not make apocalyptic predictions about the immediate demise of Western civilization due to the normalization of SSM, he does present reasoning that shows the superiority of traditional marriage for building a stable society.

Heimbach’s arguments are built on ethical reasoning that expects to find a moral order in creation. Since God designed the world to function in a manner consistent with his character, the common good will be enhanced through morality that resonates with biblical norms. Dispassionate reasoning from observable facts, then, should lead toward conclusions consistent with Scripture.

This approach to the debate is helpful because it is optimistic. The arguments of this book engage readers graciously, accurately presenting both sides and allowing readers to weigh the evidence to make a decision. Although many will not be convinced by any arguments because of their previous attachment to a position, others will pursue truth for the common good.

This is a thorough book—the most comprehensive evangelical resource on the topic of same-sex marriage available today. It will not settle the public debate over SSM; that is too much to hope for any book. However, Why Not Same-Sex Marriage does make a compelling case for a traditional definition of marriage. It also provides an invaluable reference manual for proponents of traditional marriage to consult when formulating gracious, informed responses to arguments for the redefinition of marriage.

At the very least, the book brings the light of reason to bear on the best arguments from both sides of the debate, which is a precious virtue because of its rarity in this age.