Pastrix: The Cranky, Beautiful Faith of a Sinner & Saint, Nadia Bolz-Weber’s memoir of her journey from alcoholic comic to Lutheran minister, is a poignant read. Her sarcastic delivery drew me in easily, though I got bogged down a bit in the later chapters of her story. Pastrix tugs at the emotions, especially in the early chapters. Nadia tells about being raised in the Church of Christ, struggling with the physical effects of Graves’ disease, walking away from the faith as an angry, bullied kid, then eventually becoming the default spiritual leader of a group of her down-and-out comic friends after one committed suicide.

It feels inappropriate to attempt a traditional review of Nadia’s book—picking apart the positive and negative aspects of her life story. However, reading Pastrix did leave me with strong burdens, and I can’t write about it without getting into how it affected me. So consider this a non-review review.

I reacted emotionally and spiritually to Pastrix differently than I would to a book with a deliberate agenda aimed at changing my beliefs on certain subjects. Does Nadia have an agenda? Probably. Nevertheless, it’s her story, and I can’t invalidate her story simply because I have differing convictions. But I can learn from her story about the questions others have and the places they’re hurting so that I can minister grace to the next young person working to reconcile similar experiences. Most of all, I want my life and discipleship to draw young people toward receiving Scripture as the trustworthy revelation of God to us. There’s a growing group of vocal teachers who find spirituality apart from confidence in the Word, and I am burdened—not so much for them, but for the long line of young people waiting after their presentations for these teachers to sign their books. Many are seeking, and I want to be prepared to meet them in their questions and concerns.

Nadia specifically discusses her beliefs about the Bible when she lists five core doctrines that drew her to her Lutheran pastor’s church. My head nodded in strong agreement with four of the five, which articulated both our sin and also God’s great grace toward us. But it was the fourth point that struck me: 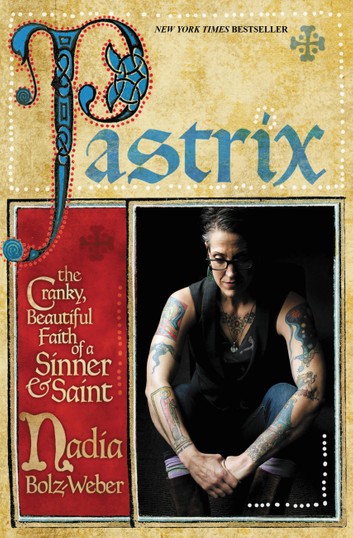 Pastrix: The Cranky, Beautiful Faith of a Sinner & Saint

Pastrix: The Cranky, Beautiful Faith of a Sinner & Saint

The Bible is not God. The Bible is simply the cradle that holds Christ. Anything in the Bible that does not hold up to the gospel of Jesus Christ simply does not have the same authority.

This analogy has it backwards. The Bible is not Christ’s cradle; instead, Christ is the Bible’s cradle. He is the lens through which all of the Word makes sense. He is the supporting structure, not the other way around. He is the enfleshed Word—God with us—who holds the key to understanding his written Word. Communicating such truth is one of my deep and heavy burdens. May God help us explain his Word to the next generation of angry, bullied seekers in an accessible way they can understand.

Conservative evangelicals sometimes talk about a war on marriage or a war on orthodox Christianity, but that isn’t the foundational issue as I see it. The problem is that people don’t understand the Bible—and I mean more than just not understanding specific things it says. People don’t understand the overarching story of the Bible itself. Ghandi famously said he liked what he knew of Christ but not what he knew of Christians. But I see an even bigger problem—when people like what they know of Christ but not what they know of Scripture. How can we can know him without confidence in the primary historical document that speaks of him? I’ve written some about this challenge over the last year (here and here), but my burden has been solidified after reading Pastrix. Believers need to understand the whole of Scripture that they may have confidence in its trustworthiness.

If you’re someone who needs to prove a point or win an argument, I don’t recommend reading Pastrix. You’ll likely just get frustrated and angry with the perceived misconceptions and illogical jumps in reasoning. But if you like to listen to others—especially those who believe differently than you do—there is much to consider in Pastrix. I gained insight that will be helpful as I have opportunities to disciple young, angry, cynical women. I want to walk with them through their struggle and listen with open ears to the burdens they carry. Nadia’s descriptions of her internal battles were helpful to me. If you don’t personally resonate with her story, her description may nonetheless be helpful for understanding people who do. She offers remarkable insight into the motivation of a not-quite-atheistic alcoholic comic from a Church of Christ background.

Along with renewing my burden to disciple young believers in the trustworthiness of God’s Word, reading Pastrix also reminded me how vital it is for believers to consistently admit their own mistakes and correct wrong teaching or practice. Our politics, personal struggles, and biases tug us away from God’s truth, and again and again we must self-correct. We must regularly re-evaluate ourselves in light of the Word, since our hearts are so prone to wander. When angry, alcoholic cynics latch on to our inconsistencies and recognize what’s truly sinful, we must lay down defensiveness and make corrections for the sake of the testimony of God’s Word.

I identified with a lot of what Nadia wrote—not because I’m a tattooed, cussing fundamentalist outcast, but because I love many who are, and I long to walk with them wisely through their struggle as a good friend who points them to Christ and the trustworthiness of his Word. All of Scripture points to Jesus, and Jesus points to all of Scripture. He didn’t come to rip apart the Old Testament but to fulfill it (Matt. 5:17). He affirms every jot and tittle, even while showing how little of it we can understand until we see it through the lens of himself. May we love the Word as he did and disciple others in the same way.