Where am I? What is this place? What am I supposed to do now?

Folks who have been thrust into a new season of life are jolted with questions like these. Moving house, job changes, the wonders of marriage and children—they all have a way of alerting us to things that had gone unnoticed. When our surroundings are too familiar, we tune out what may be glaringly apparent.

In What Are Christians For? Life at the End of the World, Jake Meador suggests Christians have fallen prey to this dullness of vision and he aims to reacquaint them to creation—the world and everything in it, made by our Creator God. This place feels less and less like home to many believers who are struggling to make sense of our current cultural climate. But that may not be a bad thing. According to Meador—the editor in chief of Mere Orthodoxy—it may be a sign that our eyes are refocusing on things that previously fell into our collective blind spots. 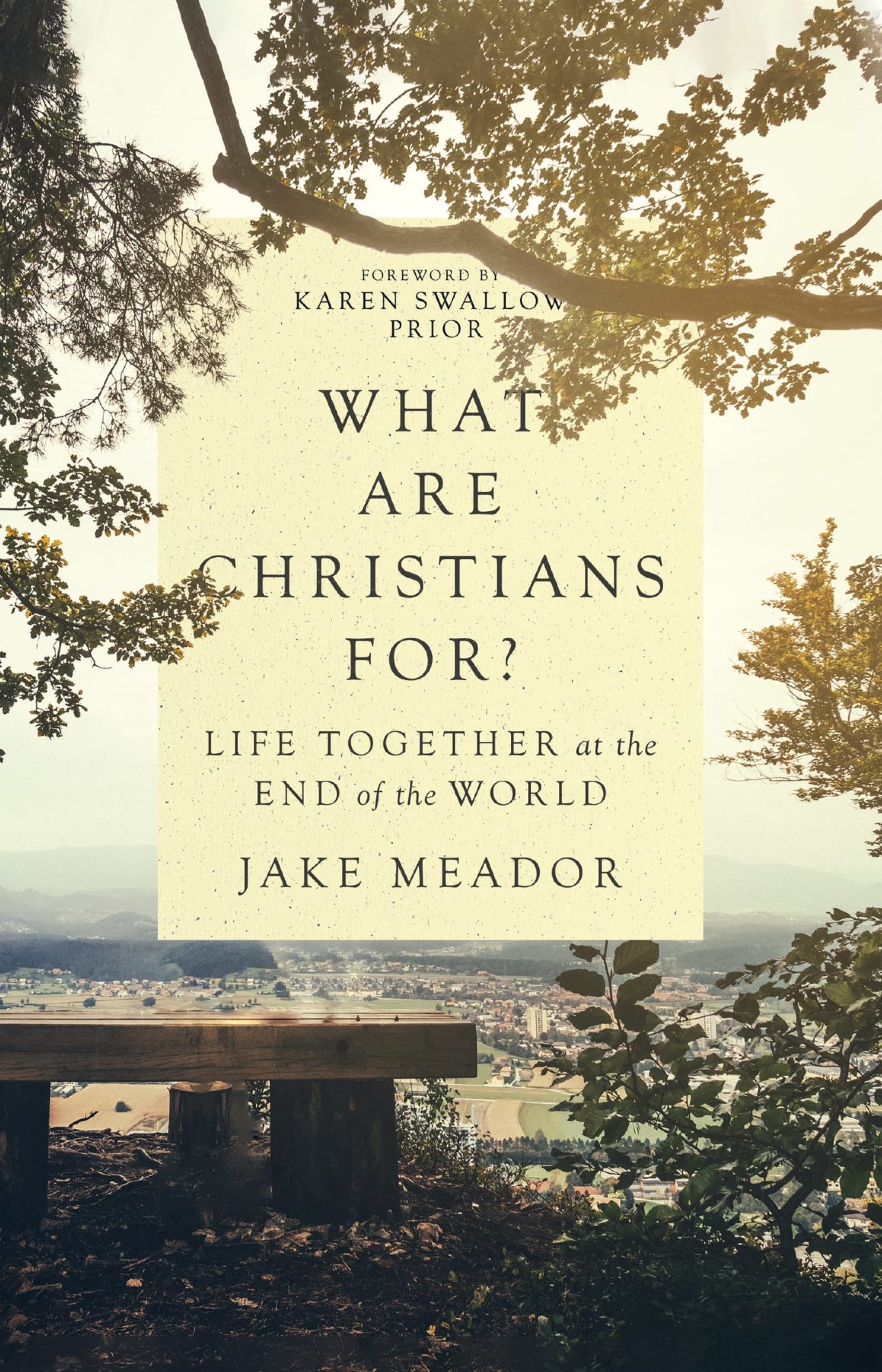 What Are Christians For? Life Together at the End of the World

What Are Christians For? Life Together at the End of the World

Politics ought to be defined by fidelity to the common good of all the members of society. But our modern Western politics are defined by a determination to bend the natural world and human life to its own political and economic ends. This wholesale rejection of the natural order is behind the dominant revolutions in our history, and defines our experience in Western society today—our racialized hierarchy, modern industry, and the sexual revolution.

In What Are Christians For?, Jake Meador lays out a proposal for a Christian politics rooted in the givenness and goodness of the created world. He is uninterested in the cultural wars that have so often characterized American Christianity. Instead, he casts a vision for an ordered society that rejects the late modern revolution at every turn and is rooted in the natural law tradition and the great Protestant confessions. Here is a political approach that is antiracist, anticapitalist, and profoundly pro-life. A truly Christian political witness, Meador argues, must attend closely to the natural world and renounce the metallic fantasies that have poisoned common life in America life for too long.

Most readers will find something to contest among Meador’s insights, but his powerful testimony, deep theological and philosophical thinking, and brave historical exploration provide a shock to the system that forces Christians in the West to reckon with where we are, how we got here, and how we might move forward in a world that is (to quote Gerard Manley Hopkins) “charged with the grandeur of God” (16).

Dark Side of the Enlightenment

Meador begins by showing that Christians in the West have bought a house—our cultural and political milieu—sight unseen, and we’ve carried on trying to live and flourish in it without inspecting the frame or the foundation. Meador treks through modernity and reveals the underbelly of Enlightenment thinking. In short, the Enlightenment turned the universe into something in which we stand at the center. We now view creation and culture not as gifts and as evidence of the beautiful diversity of a gracious God, but as objects for our valuation and callous extraction. Rather than being stewards who bear God’s image through virtuous dominion, we, in our quest for autonomy (which really began in Gen. 3), became tyrants who traded a good life with God in his world for an extension of mere existence.

We now view creation and culture not as gifts and as evidence of the beautiful diversity of a gracious God, but as objects for our valuation and callous extraction.

Meador writes about the white colonialists who were “so confident . . . in their own superiority to the people they encountered that they did not feel it was necessary to listen to them or to learn from their ways of living in what was, to the Europeans, a strange new place, and what was, to the Indigenous peoples, their home” (45). Of course, colonizers should’ve confessed their lack of knowledge about life in a new land and, more importantly, recognized that these foreign peoples were and are image-bearers of God. But Meador’s position seems to collapse both the sociocultural and theological underpinnings to their movement in the first place, arguing their social pride was in fact “unbelief”—a decidedly theological claim. Meador suggests that cross-cultural contact provides opportunities to both give and receive, to teach and learn, but the theological frameworks among the two cultures are left unmentioned.

Meador shows that the “unmakings” of a proper view of the land, vocation, the family, and more culminate in a threat to reality itself, which left Western civilization with no foundation for meaning and purpose apart from an idolizing of personal autonomy. When the centrality of God in creation waned, humanity became disenchanted with what was left. Wonder was replaced with efficiency, test scores, and the race to die with the most things. Meador concludes, “Much of our recent history in the West is a protracted attempt to replace the weight and significance of love, rootedness, and neighborly affection with self-creation, self-realization, and self-actualization” (95). In short, the house that the Enlightenment built has significant cracks.

World-Building After God’s Own Heart

If modern society with its humanistic pursuits leaves Christians homeless, Meador marshals theologians like Herman Bavinck, John Webster, and Emil Brunner to relocate our place in creation as dependent creatures who receive from God an “immense inheritance” by living in his good world (19). Throughout the rest of the book, Meador rebuilds creation with an eye toward what Willie James Jennings calls “ontological density” (95). He taps into the worlds of Narnia and Middle-earth to alert the reader to a startling fact: within humanity is embedded a kind of nostalgia for the Garden of Eden. The wonder and enchantment of reality far exceeds the myths of our own designs.

The L’Abri and Bruderhof communities are given as examples of a kind of faithful presence both in the natural world and in society where others-oriented love leads to generative flourishing. This looks like being inconvenienced for the sake of the land, raising children who fear God, and remaining faithful even in unimaginable circumstances. It looks like political commitments that come from viewing the world as the theater of God’s glory and not as the stage for human pride. Meador’s vision is radically ordinary and yet completely contrary to our usual way of operating.

He taps into the worlds of Narnia and Middle-earth to alert the reader to a startling fact: within humanity is embedded a kind of nostalgia for the Garden of Eden.

One example worthy of investigation is Meador’s thinking on technology. Those familiar with Wendell Berry will hear resonances in this book. Meador argues for individual evaluations of technological advancements, many of which carry a hidden cost. For example, using the writings of Romano Guardini, Meador shows that technology often removes us from creation. A sailboat is a way of using technology to move along the water. A cruise ship does the same thing, but the passengers on board could easily forget they’re even on the water. This “distance” from the natural order seems to be problematic for both Guardini and Meador.

We must remember, however, that the progression of the people of God in Scripture moves from a garden to a garden-city, a place that’s the product of both stewardship and industry. Technological advancement need not be in competition with the beauty and wonder of creation. In Meador’s work, however, one picks up on a real tension between man’s charge to have dominion over the earth (which would seemingly allow for manipulation and control for man’s ends) and an almost passive engagement with creation that seeks to make as few ripples as possible. We need sanctified wisdom to navigate that tension.

Some will see this vision for how life should be as antiquated, idyllic, and almost allergic to technology. Meador’s point, however, that Christians should recognize the hidden costs of technology is precisely the corrective our culture needs to hear. We constantly wrestle with the pull of social media, an always-online presence, and the seemingly limitless access to knowledge from our phones. Believers must recognize we’re experts at making idols out of the tools we create and the benefits offered by technology often do more harm than good.

Meador’s refreshing insights are worth considering, and many will be rightly confronted about their current stance toward creation. But, while Meador’s evaluations might raise alarm, he is no alarmist. The book’s tenor remains hopeful. He recognizes the world he writes about is broken and marred by sin, and yet it’s nonetheless held in the hands of the Sovereign God, whose good providence will always come to pass.

This is my father’s world
Oh, let me never forget
That though the wrong seems oft so strong
God is the ruler yet.
(This Is My Father’s World)