On May 16, 2016, Russell Moore, president of the Ethics and Religious Liberty Commission of the Southern Baptist Convention, appeared in a short video responding to Zubik v. Burwell. This Supreme Court decision overturned lower court rulings that refused to grant the Little Sisters of the Poor relief from the HHS mandate on the basis of their religious convictions regarding contraception. Moore expressed satisfaction with the ruling but noted there’s much work left to do in order to bring persons to acknowledge that God, not the government, gives basic religious liberty to all individuals.

Moore’s one-minute video response succinctly illustrates a significant shift in how conservative American Protestants have come to understand the meaning of religious liberty over the past 60 years. As Neil J. Young—a historian and independent scholar in New York City—explains in his new book, We Gather Together: The Religious Right and the Problem of Interfaith Politics, Protestants in the 1950s thought of religious liberty as a hedge protecting them against Roman Catholic supremacy in the United States. By 2012, they saw it as a rallying point against secularism and anti-Christian stances in American culture.

Young’s overall project is to show that the rise of the Religious Right in postwar America wasn’t the result of a concerted conservative effort at ecumenism but part of a larger historical trend. Further, Young asserts that while Mormons, Catholics, and evangelicals found common ground sufficient to win significant electoral victories (especially in 1980, 1984, 1988, 1994, 2000, and 2004), doctrinal convictions kept these groups isolated from one another, which stymied their larger policy aims.

School prayer, abortion, the Equal Rights Amendment, homosexuality, feminism, secularization, and threats to the traditional family were key issues of concern to conservatives from the early 1960s and continue to be so today. For Catholics and Mormons, unity meant agreement around ecclesiology—namely, the nature of the true church. For evangelicals, unity meant agreement around soteriology and bibliology—the nature of salvation and of the authority and inerrancy of Scripture. The common theme Young visits is the perceived need for Catholics, Mormons, and evangelicals to unite in the face of a rising tide of secularism, but their inability to sustain a long-term unified front given their respective exclusionary dogmatism. 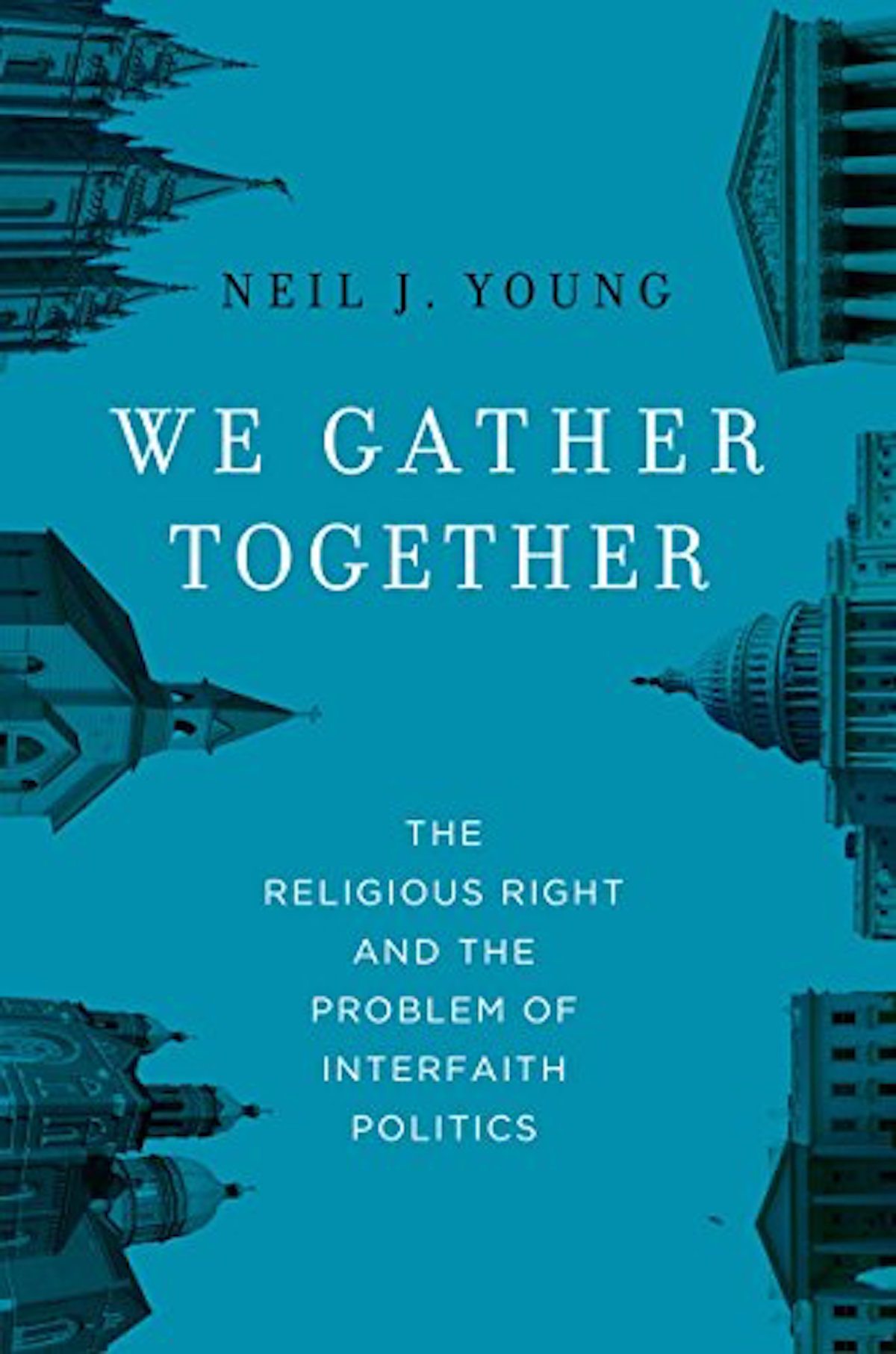 We Gather Together: The Religious Right and the Problem of Interfaith Politics

We Gather Together: The Religious Right and the Problem of Interfaith Politics

Young’s characterization of the interfaith dialogue between conservatives is an unambiguous lesson in historical complexity and change over time. One of the unique features of We Gather Together is that it demolishes the conventional narrative of conservatives uniting together during the 1970s to confront the issue of abortion. Young offers a much more nuanced view of ecumenical efforts during the ’70s and ’80s. Catholics were the most unified and consistent of conservative groups to oppose abortion; evangelicals were ambivalent in the early years after Roe v. Wade; and Mormons opposed abortion but from an isolated position. By the end of the 1970s, the pro-life movement had gained momentum and some unity had been achieved between Catholics, Mormons, and evangelicals.

Still, evangelicals and Mormons saw an opportunity in conservative ecumenism not only to advocate against abortion, but also to proselytize Catholics and well as each other. Far from being a simple awakening to the need for a united front in the 1970s against secularism, the reality behind interfaith dialogue in the wake of Engle v. Vitale, Roe v. Wade, the ERA, and other issues was much more complex.

Also, in the short period of the 1950s through the 1970s, all three groups were experiencing rapid and profound internal changes. Catholics reassessed their doctrine, practice, and relationship to Protestants during the 1960s after Vatican II. Mormons underwent a vast expansion during and after the presidency of David O. McKay. And evangelicals were fighting a battle over the inerrancy of Bible within several of their denominations. These changes had a profound effect on how each group related to the others.

Evangelicals and Catholics had a firmer basis for dialogue after Vatican II because of Catholic openness to Protestants as well as their stronger emphasis on the authority of the Bible. Mormons, because of their dramatic growth in numbers, became a force to be reckoned with in American politics, even to the extent that one of their own became the Republican presidential nominee in 2012. Still, both Catholics and evangelicals regarded Mormons as outside the Christian faith, although their rhetoric became less barbed after the Republican Party nominated Mitt Romney.

There’s much to say in praise of Young’s book. It fits well alongside recent books in the history of American Christianity, such as:

We Gather Together is an ambitious book, treating numerous historical issues from the 1950s to 2012 that could have been addressed in separate book-length projects. Still, Young admits this reality—and more importantly, his handling of such a wide array of issues and events is both elegant and seamless.

Young’s work is unique in at least two ways: first, in its thorough treatment of the Mormon church alongside Protestants and Catholics in postwar America; and second, in its narrative of how interfaith dialogue in the 1950s laid the groundwork for political agendas during the 1970s and 80s.

John D. Wilsey is assistant professor of history and Christian apologetics at Southwestern Baptist Theological Seminary. He is the author of American Exceptionalism and Civil Religion: Reassessing the History of an Idea (IVP Academic, 2015) and has edited an abridgment of Alexis De Tocqueville’s Democracy in America (Lexham Press, 2016).