In this era of Facebook feeds and selfies, when image clothes identity, grief is an ill-fitting garment. It hangs on us, constricts our breath, and subverts the illusion that we can fabricate meaning from glossy photo ops. When our friends endure suffering, we spout platitudes that inflict more harm than good. When we bear its shackles ourselves, artifice crumbles away, and we struggle to frame our anguish within a Christian context. Angry at God, we fear our own anger. We wonder how the world steams on, while we linger in the shadows.

Compare this blunted expression of our sorrows with the anguished cries of Job, or David, or Christ himself. In the Bible, mourning occurs openly, with cries of despair that drive us to our knees, yet cast our eyes heavenward. As the psalmist laments:

I am poured out like water,
and all my bones are out of joint;
my heart is like wax;
it is melted within my breast;
my strength is dried up like a potsherd,
and my tongue sticks to my jaws;
you lay me in the dust of death. (Ps. 22:14–15)

No euphemisms profane this tide of grief. And yet, in the depths of despondency, the psalmist praises. Lament doesn’t negate faith, but rather springs from it:

Few examples of modern literature so guide us when we suffer, but here is an exception: Douglas Groothuis’s Walking through Twilight: A Wife’s Illness—A Philosopher’s Lament. In this memoir, the philosopher and apologist who teaches at Denver Seminary in Denver, Colorado, invites us to walk with him as he grieves his wife’s decline into dementia. Groothuis admits he didn’t want to write this book, but “it wanted to be written” (6). His narrative ebbs and flows, unveiling heartbreak and rage in some moments, pristine clarity in others. Throughout, he points to God, and returns us to the interweaving of grief and faith through lament.

Rebecca Groothuis (whom the author affectionately calls “Becky”) was once a member of Mensa. A master writer, editor, and speaker, she sculpted masterpieces with words. Now, she suffers from a variant of dementia that strikes the centers in the brain responsible for language. The words that once flowed from her with such artistry now hide, buried and inaccessible. The vibrant exchanges between Groothuis and Becky, “crackling with her intelligence and clever humor” (128), have vanished, making way for tedious ordeals to comprehend the mundane. As Groothuis describes Becky straining for words—her agitation bordering on franticness, his frustration devolving into despair—we witness their shared agony. 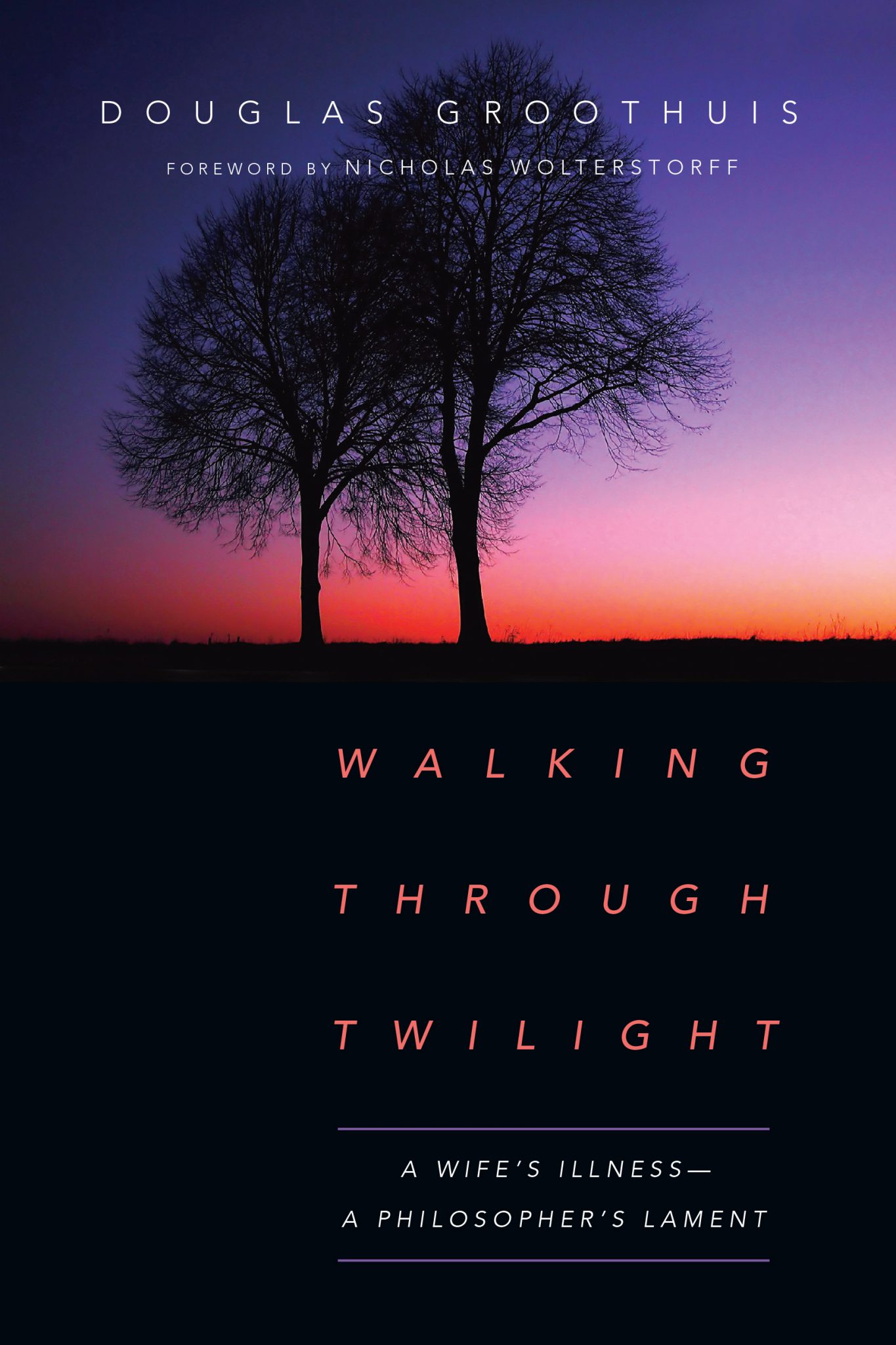 Nothing is simple for a person suffering from dementia, and for those they love. When ordinary tasks of communication, such as using a phone, become complex, then difficult, and then impossible, isolation becomes inevitable. Helping becomes excruciating.

In these pages philosopher Douglas Groothuis offers a window into his experience of caring for his wife as a rare form of dementia ravages her once-brilliant mind and eliminates her once-stellar verbal acuity. Mixing personal narrative with spiritual insight, he captures moments of lament as well as philosophical and theological reflection. Brief interludes provide poignant pictures of life inside the Groothuis household, and we meet a parade of caregivers.

Groothuis’s entire account bears witness to Becky’s genius, and the ebbing of her spark; to his own anger, sorrow, and bitterness; to God’s work persisting amid the suffering and its apparent senselessness. With a philosopher’s razor-sharp prowess, he guides us through an unflinching survey of a dwindling life. “Dawn follows darkness,” he writes, “but this comes at the price of agonized waiting. This book is a witness to that waiting” (17).

In the waiting, Groothuis finds no simple answers. “There are inscrutable evils in this fallen world that cannot be papered over by trite or sentimental comments,” he writes (54). True to conviction, his prose graces the page with profundity and tenderness, but never sentimentality. Between moments that broil with emotion, he selects singular concepts—eeriness, the definition of wisdom, nuances of laughter—and plucks them from the discussion, pausing to examine them. In his hands, these digressions ground the bigger concepts.

In this era of Facebook feeds and selfies, when image clothes identity, grief is an ill-fitting garment.

Such grounding is crucial, because his faith thrives not in bombast and fanfare, but in wisdom, and in the resignation of the brokenhearted. While Groothuis openly dialogues with God, faith doesn’t eradicate his torment. Christ’s triumph over death, he writes, offers “a way through suffering, not a way to escape suffering“ (18). He finds a way through suffering not in Scripture passages that espouse God’s love and glory, but rather the book of Ecclesiastes, which he describes as “a deep well of tough wisdom for the weary and wasted soul” (60). He leans his weight on Peter’s admission in John 6:68: “Lord, to whom shall we go?”

As with the Psalms, Walking through Twilight infuses lament with hope, poetry, and praise. We glimpse these in a beloved dog who brings joy as life decays. There is the gift of laughter, even when it has lost its wit and sagacity. There is the sudden richness and meaning of a hymn when words otherwise fail, and the intimacy of shared tears between two souls whose love persists as they partner in loss. Through Groothuis’s lament, we witness the power of grief to deepen. In the words of Michael Card, “Jesus understood that lament was the only true response of faith to the brokenness and fallenness of the world.”

Through sincere reflections about the wife he cherishes and the tragedy they endure, Groothuis reacquaints us with biblical lament.

Through sincere reflections about the wife he cherishes and the tragedy they endure, Groothuis reacquaints us with biblical lament. Coursing through the devastation, we find the hope of the kingdom to come, and the living Word that gives voice to our grief:

When I look at Becky’s face, happy or sad, I see what has been taken away, and I see what no earthly cure can touch. But I know that God’s favor has not been taken away from this child, that her awareness and intelligence will be restored. But we are still walking through twilight and into a night when no one can work. And God is working still. (78)